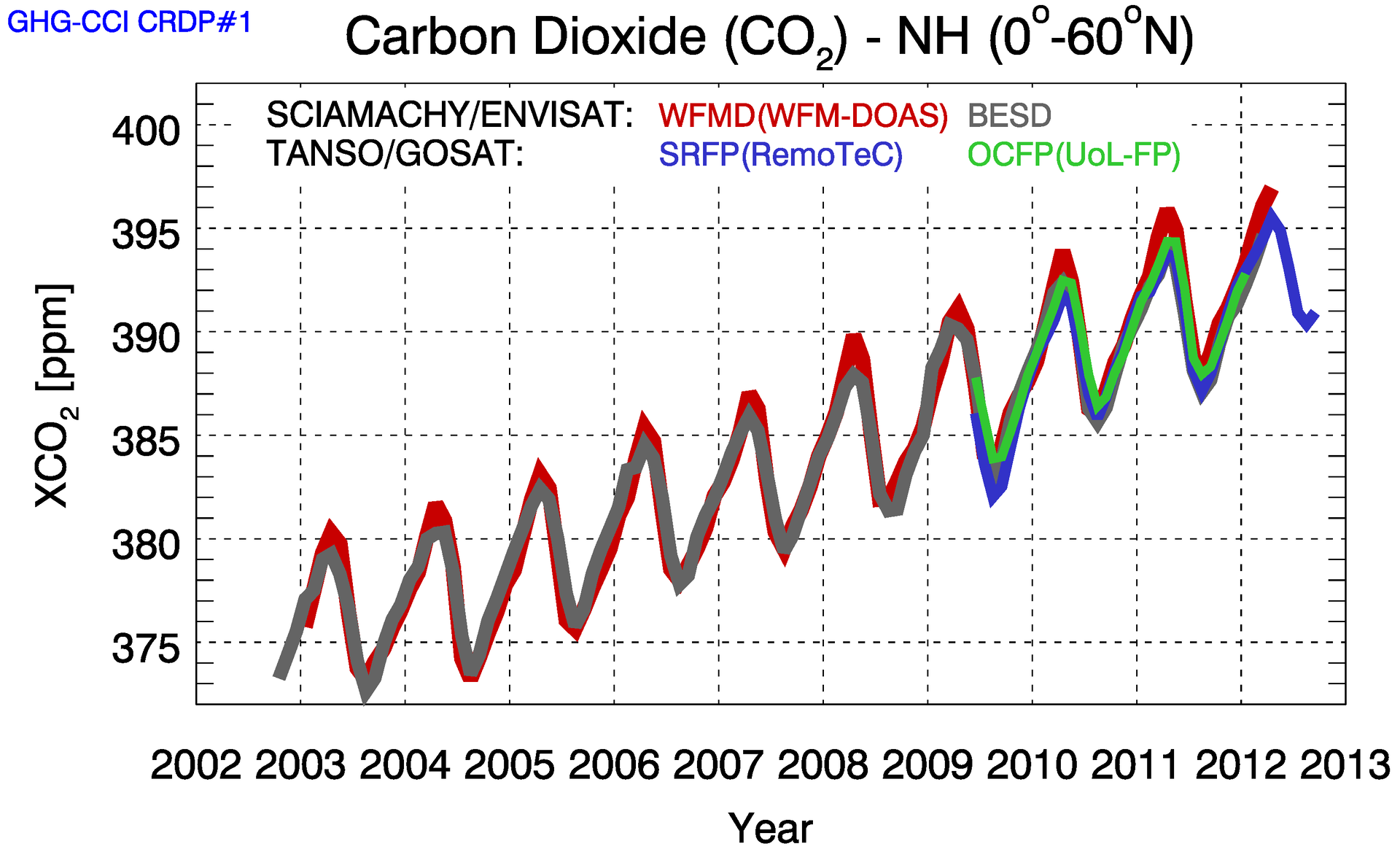 Ten years of satellite observations of greenhouse gases reveal that carbon dioxide in our atmosphere continues to increase despite international efforts to reduce carbon emissions. Satellites also show that recent methane increases are likely due to manmade emissions.

Measurements from ESA’s Envisat mission and Japan’s Greenhouse gases Observing Satellite, GOSAT, show that carbon dioxide increased by about 0.5% every year between 2003 and 2013. After years of stability, methane began increasing by 0.3–0.5% per year from 2007 on.

The main reason for the increase in carbon dioxide over the last ten years is emissions from burning fossil fuels, such as coal, oil and gas.

For methane the reason is less clear, but is most likely due to increasing manmade emissions, combined with natural variations caused by wetland emissions and biomass burning.

In addition to the increase in greenhouse gases, the satellites also show many other features such as the gases’ detailed geographical pattern and fluctuations with time.

For carbon dioxide, seasonal fluctuations are the largest, caused by variations in the photosynthesis of vegetation. The observed ‘breathing’ is largest in northern mid to high latitudes. This is expected since there the carbon exchange between the atmosphere and vegetation is particularly large, with forests sequestering carbon during the summer (‘inhaling’), part of which is released during winter (‘exhaling’).

“Some carbon dioxide models tend to underestimate the strength of the ‘breathing’, but we have to investigate this further using different models and methods,” said Dr Michael Buchwitz from Germany’s University of Bremen.

“The goal of the GHG-CCI project is to generate high-quality global distributions of atmospheric carbon dioxide and methane, yielding improved information about the regional sources and sinks of these two important climate relevant gases. This is needed to improve climate predictions,” he said.

Although the satellite maps reveal regions where methane levels are particularly high, quantifying emissions requires sophisticated model-based methods because atmospheric transport – like wind – needs to be taken into consideration.

“The satellite data enable us to obtain detailed spatial patterns of methane emissions globally, which cannot be derived from the sparse surface observations, although these measurements are much more accurate,” said Dr Peter Bergamaschi, a scientist from the European Commission’s Joint Research Centre in Ispra, Italy.

Understanding both the natural and manmade influences on atmospheric gases is the key scientific challenge.

“Continuity is a key requirement in this area, and I hope that the possible carbon dioxide data gap between GOSAT and the candidate CarbonSat mission can be closed by NASA’s OCO-2 mission and the planned GOSAT-2,” said Dr Buchwitz.

The latest results from all projects under ESA’s Climate Change Initiative will be presented at next week’s Living Planet Symposium.