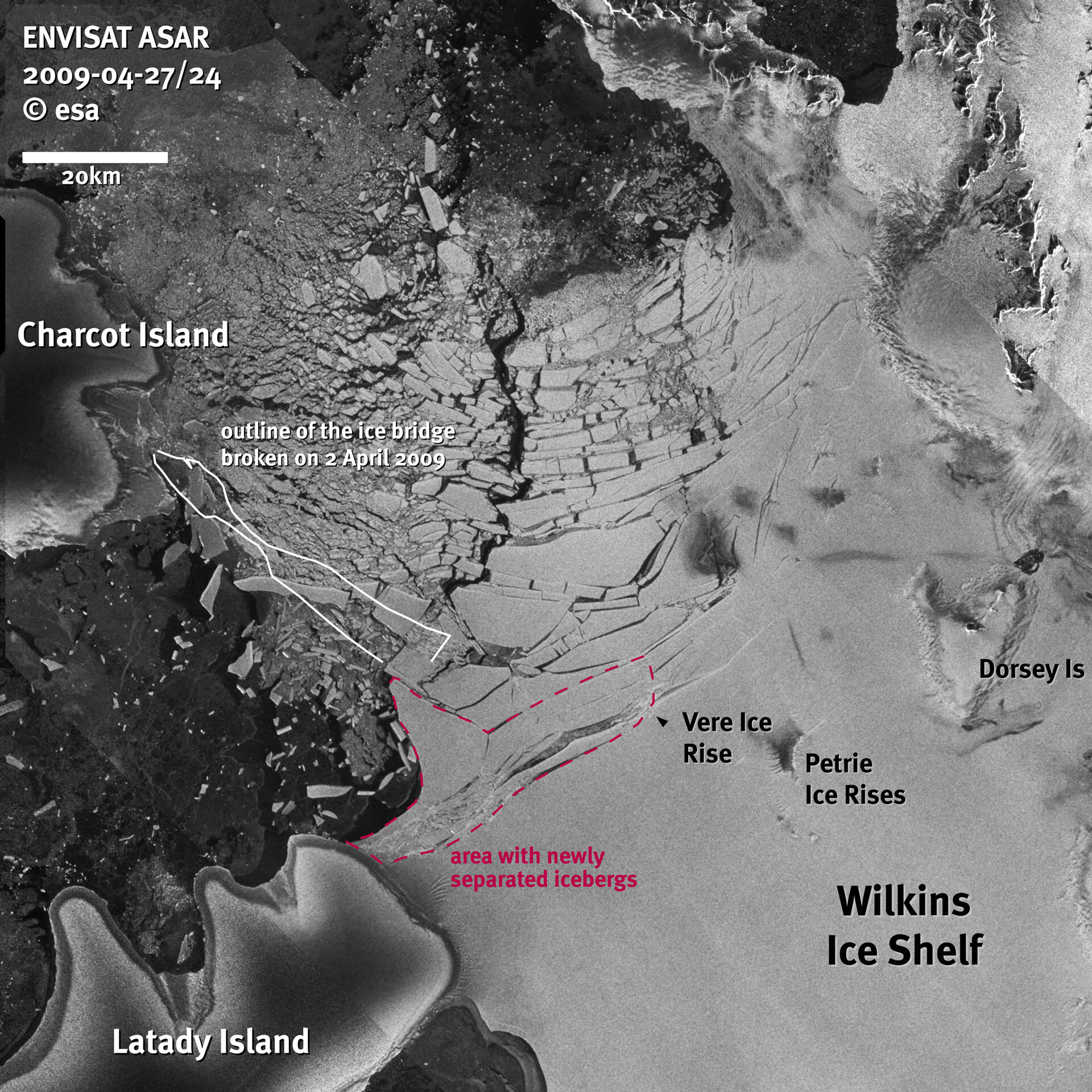 Satellite images show that icebergs have begun to calve from the northern front of the Wilkins Ice Shelf – indicating that the huge shelf has become unstable. This follows the collapse three weeks ago of the ice bridge that had previously linked the Antarctic mainland to Charcot Island.

The ice bridge, which effectively formed a barrier pinning back the northern ice front of the central Wilkins Ice Shelf, collapsed on 5 April removing about 330 sq km of ice. As a consequence of the collapse, the rifts, which had already featured along the northern ice front, widened and new cracks formed as the ice adjusted in the days that followed.

Dr Angelika Humbert from the Institute of Geophysics, Münster University and Dr Matthias Braun from the Center for Remote Sensing, University of Bonn have been monitoring the ice shelf using a combination of radar images from ESA's Envisat satellite and the German Aerospace Centre's TerraSAR-X satellite.

On 24 April, the satellite data showed that the first icebergs had started to break away from the fragile ice shelf. A very rough estimate suggests that, so far, about 700 sq km of ice has been lost from the Wilkins Ice Shelf.

In contrast to the ice bridge, which shattered very quickly, it is expected that the discharge of ice will continue for some weeks. The icebergs are calving as a result of fracture zones that have formed over the last 15 years and which turned Wilkins into a fragile and vulnerable ice shelf.

"The retreat of Wilkins Ice Shelf is the latest and the largest of its kind. Eight separate ice shelves along the Antarctic Peninsula have shown signs of retreat over the last few decades. There is little doubt that these changes are the result of atmospheric warming on the Antarctic Peninsula, which has been the most rapid in the Southern Hemisphere," explained David Vaughan from the British Antarctic Survey.

"The changes to Wilkins Ice Shelf provide a fabulous natural laboratory that will allow us to understand how ice shelves respond to climate change and what the future will hold for the rest of Antarctica," Vaughan commented. "The quality and frequency of images acquired by ESA satellites mean that the break-up of Wilkins Ice Shelf can be analysed far more effectively than any previous event. For the first time, I think, we can really begin to see the processes that have brought about the demise of the ice shelf."

However, it is still unclear how the situation will evolve. Humbert noted that, "We are not sure if a new stable ice front will now form between Latady Island, Petrie Ice Rises and Dorsey Island. If the connection to Latady Island is lost, the projected loss of 3370 sq km of ice might be greater – though we have no indication that this will happen in the near future."

The combination of high resolution images and the more frequently acquired Envisat images, increases the understanding of ice shelf break-up more than ever before.

ESA's Webcam from Space is available to the public and features the latest Envisat images, documenting the break-up of Antarctica's Wilkins Ice Shelf.