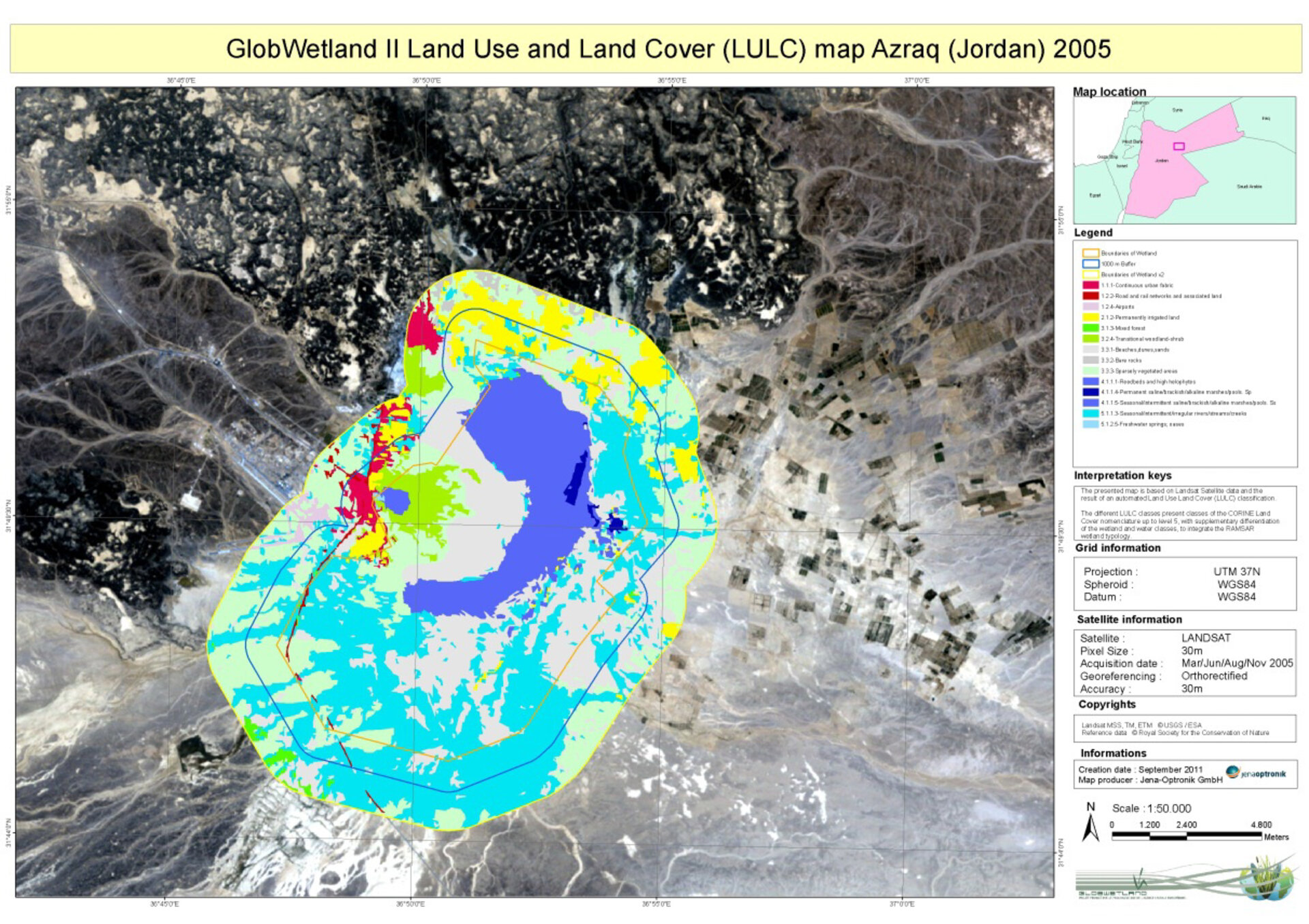 Wetlands are havens of biodiversity, and have important ecological, hydrological and economic value, but their misuse can have devastating consequences. Satellite data are being used for wetland conservation and management.

In the arid desert of central-eastern Jordan, the Azraq oasis is the only permanent source of fresh water for about 12 000 sq km, and provides drinking water for about a quarter of the country’s capital and largest city, Amman.

Historically, the water source made Azraq a major desert route, facilitating trade in the region. It is also an important station for migratory birds on the African–Eurasian flyway.

But excessive pumping of water from the oasis and illegal drilling of wells for agricultural purposes have caused water levels to drop steadily over the past 50 years – depleting water from the wetland area.

A significant decrease of water starting in 1981 reached threatening levels in 1993, forcing many migratory birds to move away from the area. This motivated a project to rescue the wetland and increase dwindling water levels in 1994.

To map the progress of Azraq’s rescue project, as well as monitor other wetlands worldwide, data from Earth-observing satellites are being exploited to map the areas’ water, natural land and artificial surfaces in high detail.

The further development of internationally coordinated actions for the conservation and sustainable use of wetlands came into focus last week at the 11th Conference of the Parties (COP-11) of the Ramsar Convention on Wetlands held in Bucharest, Romania.

Wetlands are havens of biodiversity and have an inestimable ecological value as habitat for various wild animals such as migratory birds.

They have an important hydrological value through their natural drainage systems which can also act as a protection dam to cope with droughts and excessive water during the rainy seasons such as floods.

Wetlands are also an economic value for water resource development, fishery industry and ecological tourism, and a social value such as poverty eradication through the supply of water and food to local population.

In the recent years, the use of satellite Earth observations with innovative geospatial analysis has proved to be a key tool and unique information source to support the environmental community in different application domains, including wetlands conservation and management.

Part of the Ramsar strategic plan is to develop a Global Wetlands Observing System (GWOS) that would allow an increase in the accessibility of data and information on wetlands and reporting on changes in wetlands status, worldwide.

In response, ESA launched the GlobWetland II project as a GWOS regional pilot project in the southern Mediterranean basin.

The project’s principal objective was to develop a software – or ‘toolbox’ – that can be used by all Ramsar Parties to assess and monitor their wetlands with satellite images.

Over 2000 wetland-related maps and indicators have been produced by the project on 200 wetland sites and surrounding areas of the Southern Mediterranean basin, extending from Morocco to Syria.

The GlobWetland II toolbox and database have already been installed in five of the project’s ten countries, with dedicated training sessions in Jordan (with the participation of Libya and Lebanon), Algeria and Tunisia.

At COP-11, ESA organised a side event to present the GW-II toolbox and products, and to show how their use is being extended to other wetlands in the Mediterranean basin by the Tour du Valat wetlands research centre, host of the Mediterranean Wetlands Observatory.

Participants at the side event acknowledged the ESA’s efforts and resources in promoting and demonstrating the benefits of Earth observation technology for the Ramsar Convention, and in developing a toolbox that can be used by the Contracting Parties.