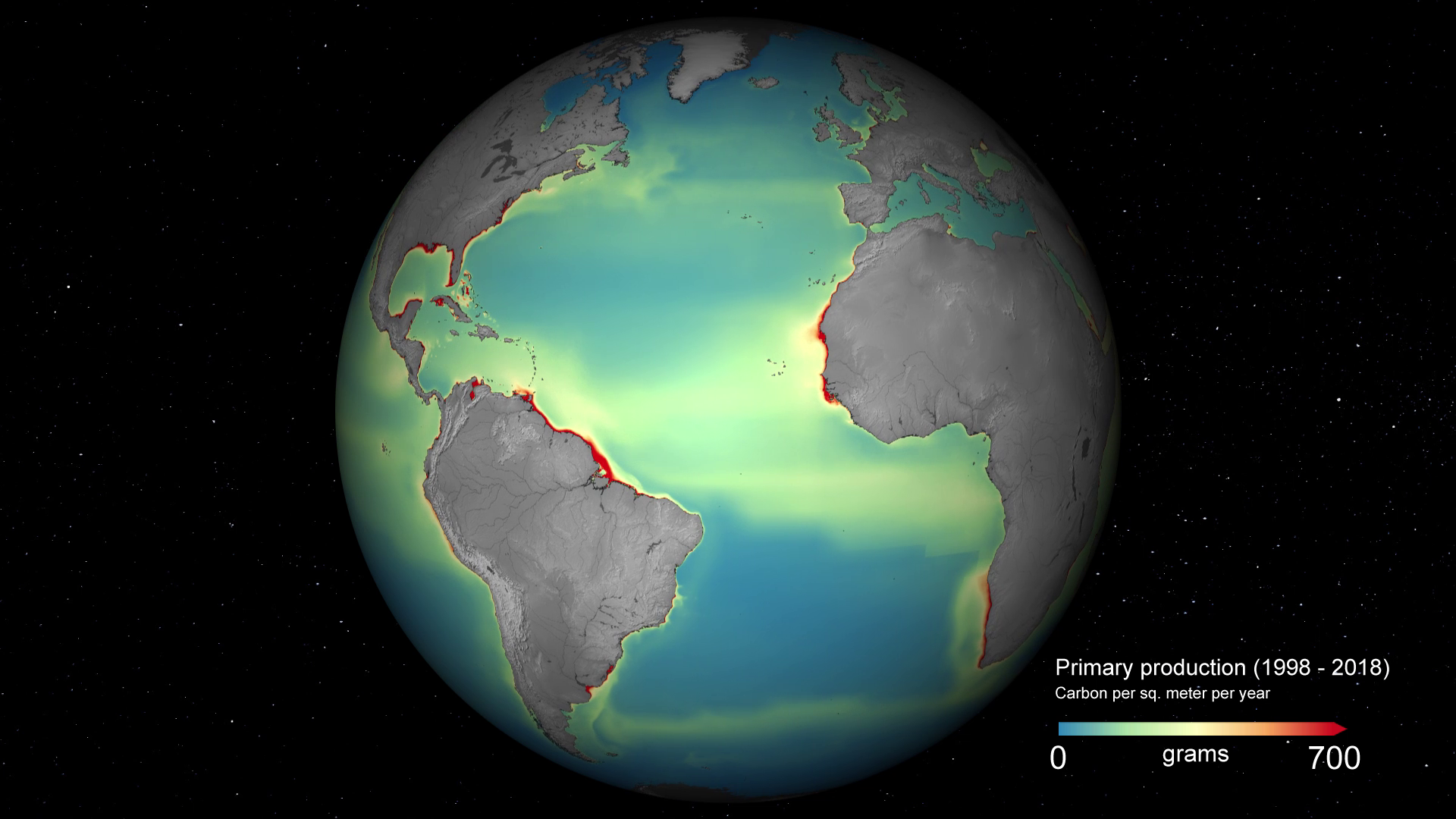 Phytoplankton play a crucial role in ocean biology and climate. Understanding the natural processes that influence phytoplankton primary production, and how they are changing as the planet warms, is vital. A new study, using data from the European Space Agency’s Climate Change Initiative, has produced a 20-year time-series of global primary production in the oceans – shedding new light on the ocean’s living carbon pump.

Phytoplankton, microscopic, free-floating plants in aquatic systems, play an important role in the global carbon cycle by absorbing carbon dioxide on a scale equivalent to that of terrestrial plants. Primary production is an ecologic term used to describe the synthesis of organic material from carbon dioxide and water, in the presence of sunlight, through photosynthesis.

Even small variations in primary productivity can affect carbon dioxide concentrations, as well as influencing biodiversity and fisheries.

As ocean surfaces warm in response to increasing atmospheric greenhouse gases, phytoplankton productivity will need to be monitored both consistently and systematically. Although in situ measurements are necessary in studying productivity, satellite data are fundamental to providing a global view of phytoplankton and their role in, and response to, climate change.

In a recent paper published in Remote Sensing, scientists used data from the Ocean Colour Climate Change Initiative to study the long-term patterns of primary production and its interannual variability. Combining long-term satellite data with in situ measurements, they assessed global annual primary productivity from 1998-2018.

Gemma Kulk, from Plymouth Marine Laboratory and the lead author of the paper, comments “Everyone understands why the rainforests and trees are important – they are the lungs of the Earth, taking up carbon dioxide from the atmosphere. What is overlooked is that the oceans are of equal importance – every second breath you take comes from the oceans.”

Being able to observe and quantify primary production over long-time scales will help the scientific and modelling communities to determine the effect of climate variability on these processes, as well as to identify any residual trend that signals a shift in climate.

Co-author, Shubha Sathyendranath, from Plymouth Marine Laboratory and science leader of the Ocean Colour CCI project, adds, “Although the data records span 20 years, it is important to wait at least 30 years to be able to identify any clear climate trend with sufficient confidence.

“It is critical that the ocean colour dataset as part of the Climate Change Initiative be extended and maintained on a regular basis, so that we have an empirical record of the response of ocean biota to changes in climate. From this, we can develop reliable models, so we can accurately predict change in order to adapt to the impacts of a changing world.”

ESA’s Climate Change Initiative is a research and development programme that merges and calibrates measurements from multiple satellite missions to generate a global time-series looking at 21 key components of the climate system. Spanning decades, these long-term data records enable scientists to identify climate trends, develop and test Earth system models that predict future change and inform decision-makers to mitigate and adapt to the impacts.