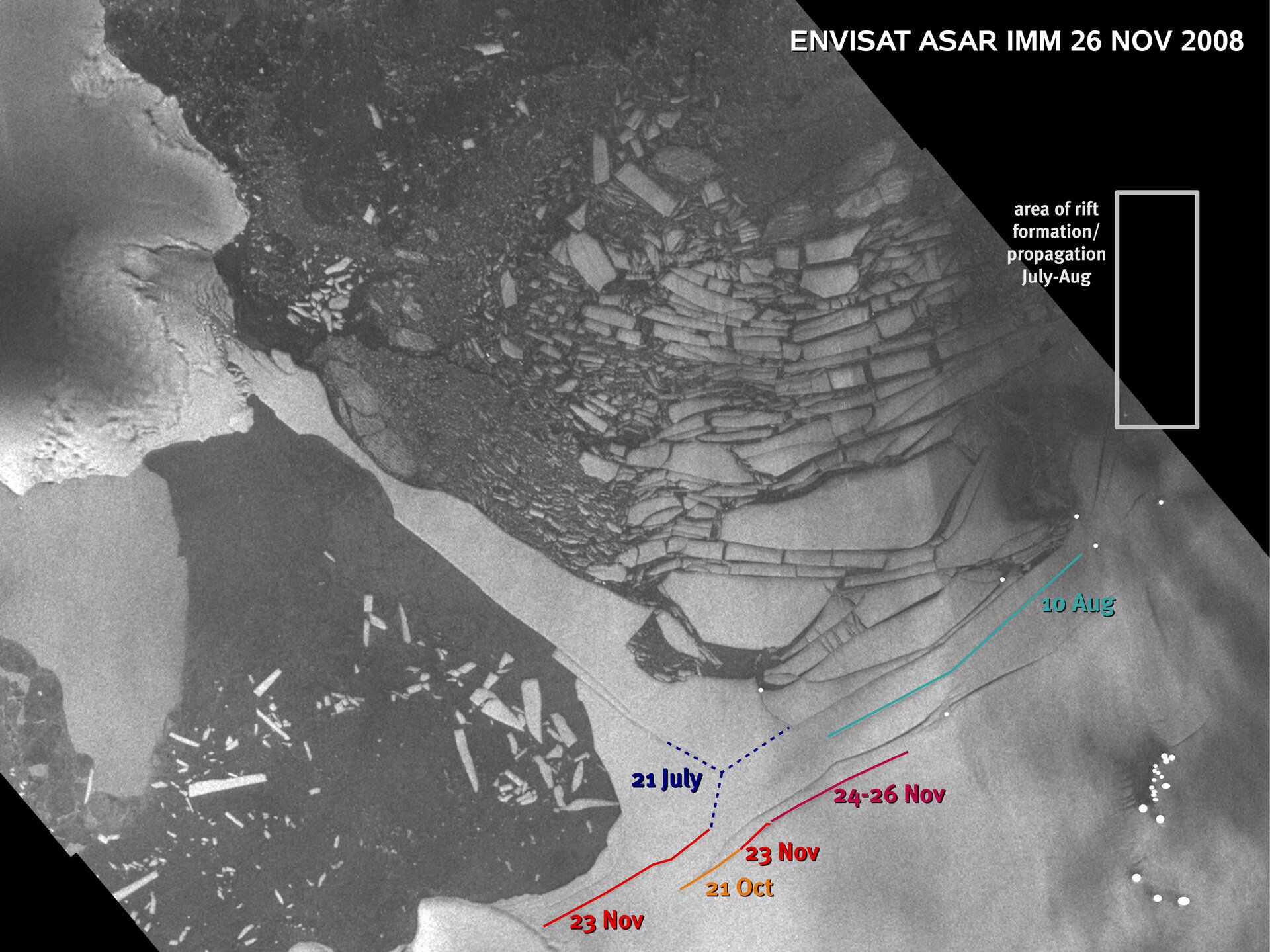 New rifts have developed on the Wilkins Ice Shelf that could lead to the opening of the ice bridge that has been preventing the ice shelf from disintegrating and breaking away from the Antarctic Peninsula.

The ice bridge connects the Wilkins Ice Shelf to two islands, Charcot and Latady. As seen in the Envisat image above acquired on 26 November 2008, new rifts (denoted by colourful lines and dates of the events) have formed to the east of Latady Island and appear to be moving in a northerly direction.

Dr Angelika Humbert from the Institute of Geophysics, Münster University, and Dr Matthias Braun from the Center for Remote Sensing, University of Bonn, spotted the newly formed rifts during their daily monitoring activities of the ice sheet via Envisat Advanced Synthetic Aperture Radar (ASAR) acquisitions.

"These new rifts, which have joined previously existing rifts on the ice shelf (blue dotted line), threaten to break up the chunk of ice located beneath the 21 July date, which would cause the bridge to lose its stabilisation and collapse," Humbert explained. "These recent changes are happening slower and more continuously than the events we saw earlier this year."

The Wilkins Ice Shelf, a broad plate of floating ice south of South America on the Antarctic Peninsula, had been stable for most of the last century before it began retreating in the 1990s. The peninsula has been experiencing extraordinary warming in the past 50 years of

If the ice shelf breaks away from the peninsula, it will not cause a rise in sea level since it is already floating. However, ice shelves on the Antarctic Peninsula are sandwiched by extraordinarily raising surface air temperatures and a warming ocean, making them important indicators for on-going climate change.

Long-term satellite monitoring over Antarctica is important because it provides authoritative evidence of trends and allows scientists to make predictions. Over the last 17 years, ESA’s ERS and Envisat satellite missions have been the main vehicles for testing and demonstrating the use of Earth Observation data in Polar Regions.

In the past 20 years, seven ice shelves along the Antarctic Peninsula have retreated or disintegrated, including the most spectacular break-up of the Larsen B Ice Shelf in 2002, which Envisat captured within days of its launch.

Envisat’s ASAR instrument is particularly suited to acquire images over Antarctica during the local winter period because it is able to produce high-quality images through bad weather and darkness, conditions often found in the area.

Daily ASAR images of Antarctica are easily accessible to scientists. ESA will publish an update about the status of the Wilkins Ice Shelf in the event of a break-up.