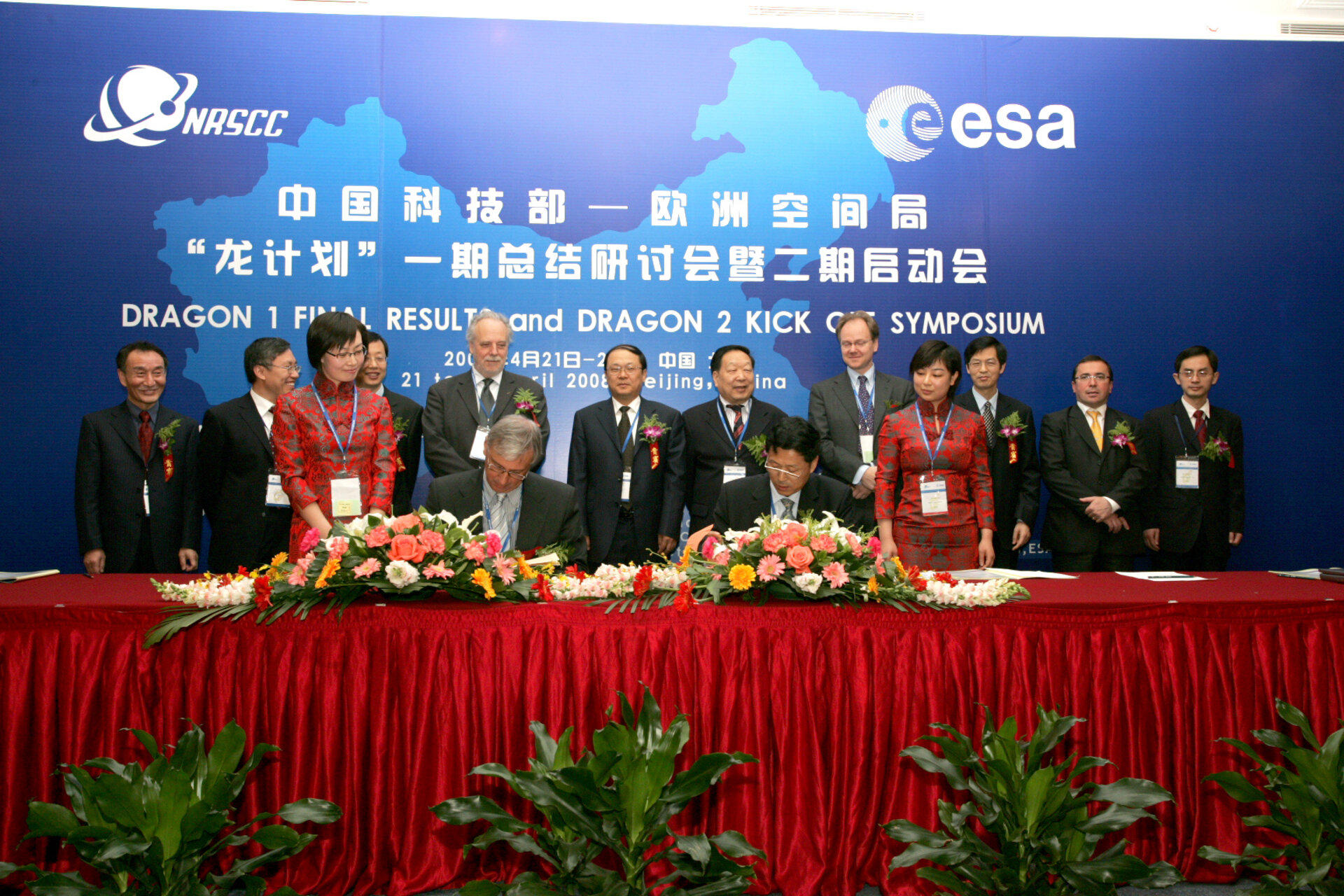 Following the success of the Dragon Programme, more than 300 leading European and Chinese scientists have gathered from 21 to 25 April 2008 in Beijing in the People’s Republic of China to present their results and to kick off the programme’s second phase, Dragon 2.

The Dragon Programme is a joint undertaking between ESA and the Ministry of Science and Technology (MOST) of China designed to encourage increased exploitation of ESA and Chinese Earth Observation (EO) satellite data within China.

Opening the Dragon 1 final symposium and Dragon 2 Kick-Off symposium, ESA’s Director for Legal Affairs and External Relations Mr Rene Oosterlinck said: "The Sino-European Dragon Programme is a cooperation of which we are very proud. In terms of organisation, it is a small programme but one that has yielded great scientific results. By pooling Chinese and European capacities together, we are achieving much better results than if we had done it separately.

"In today’s globalised world, Earth Observation from Space can contribute to the solution of universal problems and issues, such as environmental monitoring and food security, only if we all continue to cooperate together and projects such as Dragon are a good start."

In his opening address, Deputy Director General of High and New Technology Development and Industrialization of MOST Liao Xiaohan said: "The Dragon Programme has become the model of Sino-European science and technology cooperation. The successful first phase of the Dragon Programme has promoted cooperation between remote sensing experts from China and Europe, enhanced remote sensing technological capability of China and Europe, generated positive and extensive international implications and created a foundation for a more in-depth partnership as the next step."

"Europe, over the last 30 years, has established itself as one of the leading players in Earth Observation. Scientific and operational missions, deployed by ESA, EUMETSAT and their Member States, allow coverage for a wide range of domains in Earth sciences and in applications," said ESA’s Stefano Bruzzi, Head of EO Programme Planning & Coordination Service.

"This impressive capacity has been built from the beginning in a framework of international cooperation which ESA intends to pursue and enlarge in future years. Dragon is a very good example of the way ahead."

The Dragon 1 Programme, which began in April 2004, sought to stimulate increased scientific cooperation in EO science and applications between China and Europe.

The projects’ outstanding scientific results were presented at the Dragon 1 final symposium and the final scientific publications are now available.

Unlike Dragon 1, Dragon 2 will provide European and Chinese scientists with equal access to the data available from relevant ESA and Chinese EO satellites.

Under Dragon 2, the number of projects has been increased to 25 following an Announcement of Opportunity, in which 52 proposals were received. The projects will cover the following themes: atmospheric studies, topographic mapping, hydrology, sea-ice monitoring, coastal-zones monitoring, land environment, geology, renewable resources, oceanography, hazards, large sports events and the calibration and validation of satellite data.

EO satellites are particularly useful for monitoring and understanding environmental phenomena in China, the world’s third largest country, because of the country’s sheer size and various types of terrain, which range from Himalayan peaks to tropical lowlands.

Dragon 2 EO data delivery will commence in May 2008 and continue for four years. For more information please visit the Dragon 2 website.