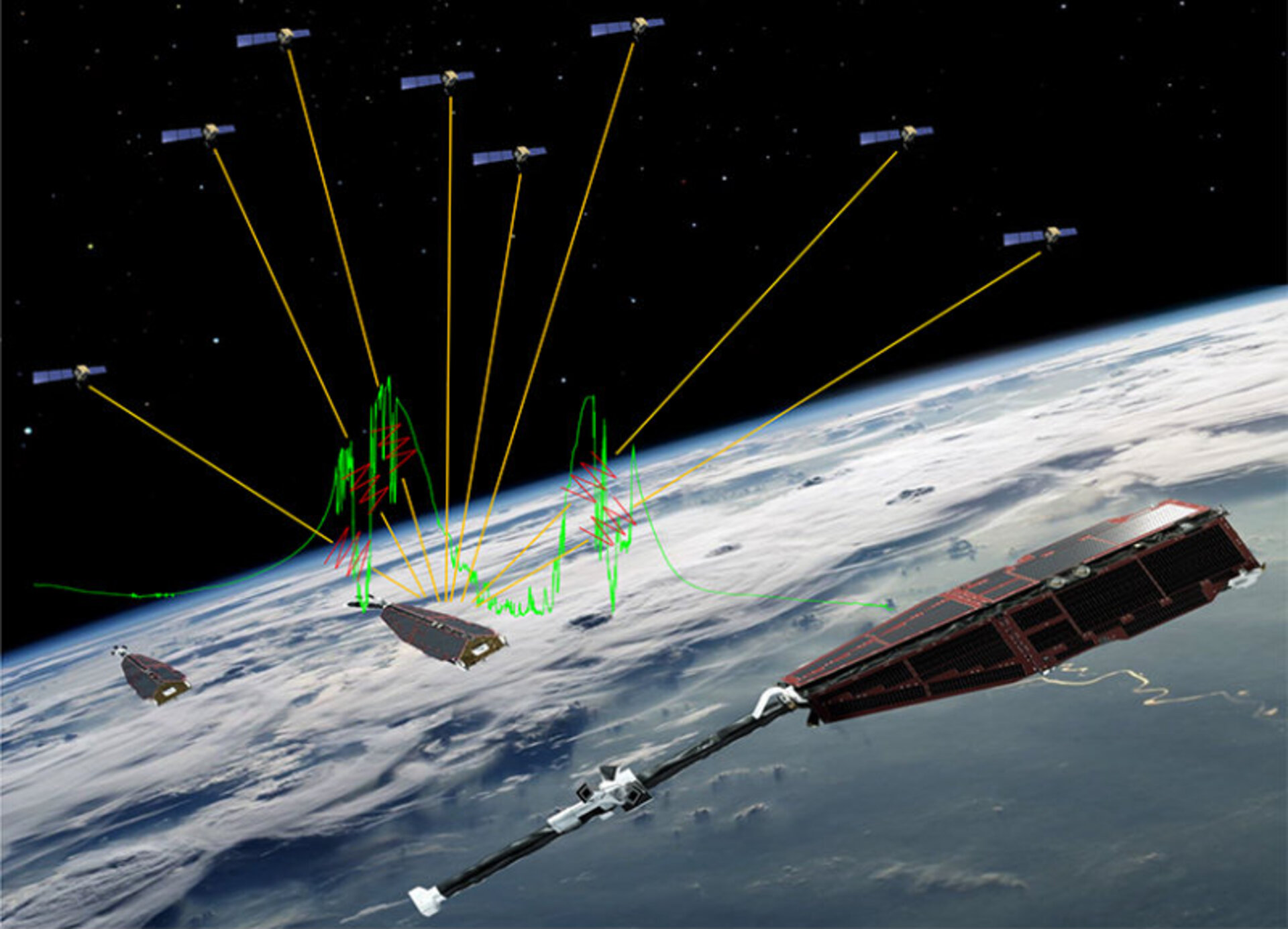 Satellite engineers have been puzzling over why GPS navigation systems on low-orbiting satellites like ESA’s Swarm sometimes black out when they fly over the equator between Africa and South America. Thanks to Swarm, it appears ‘thunderstorms’ in the ionosphere are to blame.

Launched in 2013, the Swarm trio is measuring and untangling the different magnetic fields that stem from Earth’s core, mantle, crust, oceans, ionosphere and magnetosphere – an undertaking of at least four years.

As with many satellites, ESA’s three Swarm satellites carry GPS receivers as part of their positioning system so that operators keep them in the correct orbits. In addition, GPS pinpoints where the satellites are making their scientific measurements.

However, sometimes the satellites lose their GPS connection. In fact, during their first two years in orbit, the link was broken 166 times.

A paper published recently describes how Swarm has revealed there is a direct link between these blackouts and ionospheric ‘thunderstorms’, around 300–600 km above Earth.

Claudia Stolle from the GFZ research centre in Potsdam, Germany said, “Ionospheric thunderstorms are well known, but now we have been able to show a direct link between these storms and the loss of connection to GPS.

“This is thanks to Swarm because it is the first time that high-resolution GPS and ionospheric patterns can be detected from the same satellite.”

These thunderstorms occur when the number of electrons in the ionosphere undergoes large and rapid changes. This tends to happen close to Earth’s magnetic equator and typically just for a couple of hours between sunset and midnight.

As its name suggests, the ionosphere is where atoms are broken up by sunlight, which leads to free electrons. A thunderstorm scatters these free electrons, creating small bubbles with little or no ionised material. These bubbles disturb the GPS signals so that the Swarm GPS receivers can lose track.

It transpires that 161 of the lost signal events coincided with ionospheric thunderstorms. The other five were over the polar regions and corresponded to increased strong solar winds that cause Earth’s protective magnetosphere to ‘wobble’.

Resolving the mystery of blackouts is not only good news for Swarm, but also for other low-orbiting satellites experiencing the same problem. It means that engineers can use this new knowledge to improve future GPS systems to limit signal losses.

Christian Siemes, who works at ESA on the mission, said, “In light of this new knowledge, we have been able to tune the Swarm GPS receivers so they are more robust, resulting in fewer blackouts.

“Importantly, we are able to measure variations in the GPS signal which is not only interesting for engineers developing GPS instruments, but also interesting to advance our scientific understanding of upper-atmosphere dynamics.”

ESA’s Swarm mission manager, Rune Floberghagen, added, “What we see here is a striking example of a technical challenge being turned into exciting science, a true essence of an Earth Explorer mission such as Swarm.

“These new findings demonstrate that GPS can be used as a tool for understanding dynamics in the ionosphere related to solar activity. Perhaps one day we will also be able to link these ionospheric thunderstorms with the lightning we see from the ground.”