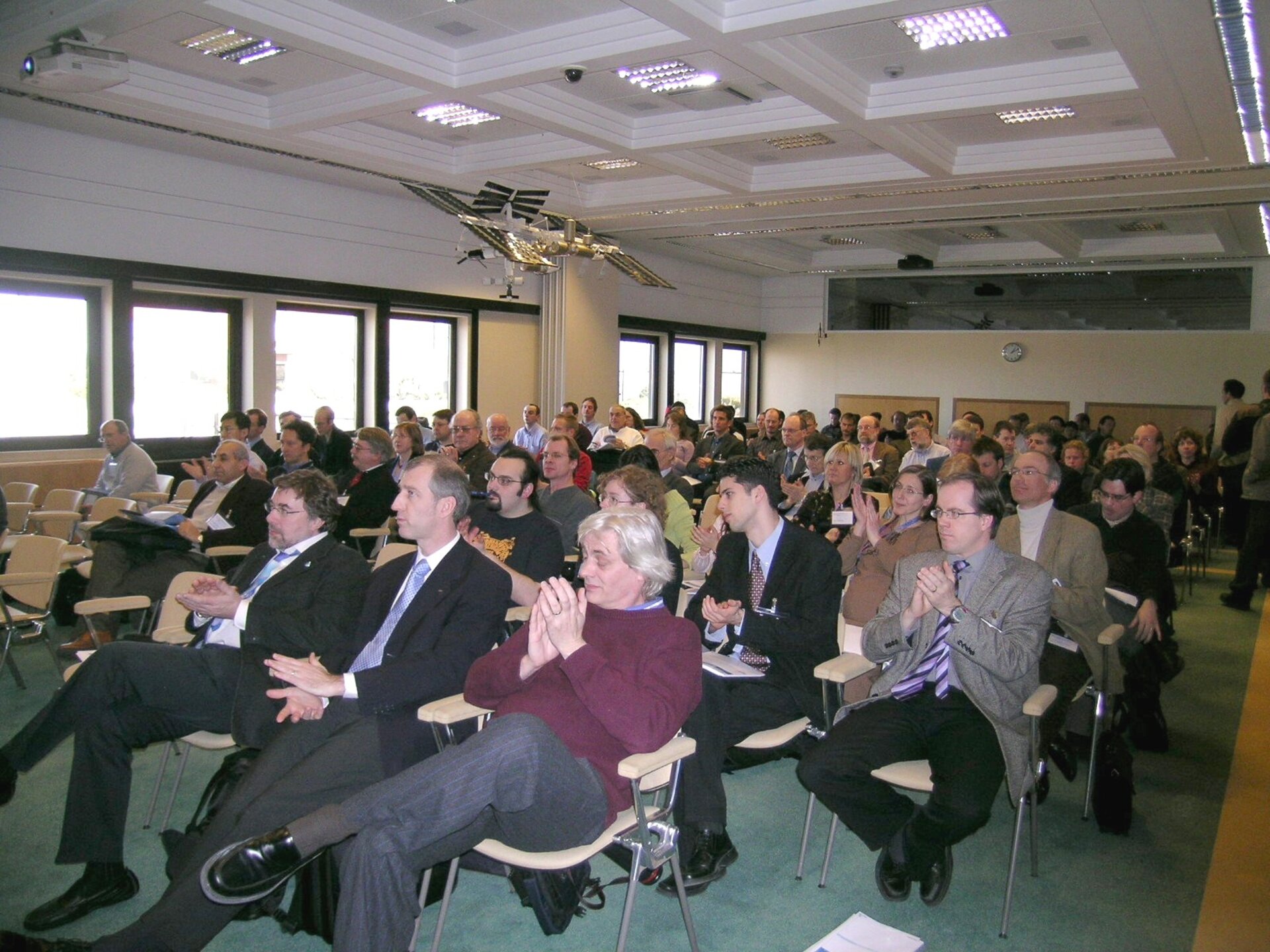 Around 150 researchers from 15 countries across Europe as well as Canada and the United States gathered near Rome to prepare for CryoSat, ESA's Earth Observation mission dedicated to the precise measurement of land and sea ice thickness.

While in some places dramatic changes are occurring in the polar regions, we still do not have a full picture of how the polar caps as a whole are responding to climate change. Due to launch at the end of July this year, CryoSat is designed to provide a clear answer to this leading scientific question.

CryoSat is the first of ESA's Earth Explorers, science missions focused on specific issues of our planetary environment. CryoSat's focus is polar ice. Using an innovative multi-mode radar altimeter it will measure fluctuations in land ice sheet height and sea-ice thickness to an unprecedented accuracy during a three-year period.

The first CryoSat User Workshop took place from 8 to 10 March at ESRIN, ESA's establishment in Italy, located in Frascati.

The three-day event was formally opened by Volker Liebig, Head of ESRIN and ESA Director of Earth Observation: "The main objective of this first workshop is to provide future users of CryoSat data with a better understanding of CryoSat measurements, the data products and their validation.

"It is also an opportunity for scientific users to present their own research programmes and discuss details with the ESA engineers."

Liebig added that existing ESA Earth Observation missions such as Envisat deal with ice, snow and water in a broad context but that CryoSat was a much more dedicated mission, and it was good to see such a high and broad scientific interest in it from across Europe.

CryoSat Lead Investigator Duncan Wingham, Professor of Climate Physics at University College London, recalled that it was more than seven years ago that the first 50-page paper proposing CryoSat had been written: "Having led that proposal, it is a pleasure to see so many people here as a consequence."

Wingham added that satellite data had already provided researchers with a wealth of data on polar ice – he singled out 11 years worth of results from ESA's ERS spacecraft – but that CryoSat remained as relevant as ever.

"Our use of previous spacecraft has been opportunistic in nature, using instruments optimised for studying the ocean geoid," said Wingham. "With CryoSat we have started from scratch with a clean piece of paper, achieving as close as possible to a true polar orbit and an increase in sensor accuracy and density of coverage."

CryoSat's main instrument is called the SAR/Interferometric Radar Altimeter (SIRAL). Using one of two antennas it sends out radar signals then both antennas detect signal echoes from the Earth's surface. By knowing the position of the spacecraft to a very high accuracy – achieved with an onboard ranging instrument called the Doppler Orbitography and Radiopositioning Integrated by Satellite (DORIS) supplemented by a laser retro-reflector system – the signal return time reveals the surface altitude. Correct antenna orientation is also vital and is maintained using a trio of Star Trackers.

Past radar altimeters can deliver data only over the sea and large-scale homogeneous ice surfaces, but SIRAL's new design can also provide detailed views of irregular sloping edges of land ice as well as non-homogenous ocean ice.

The instrument will work in standard Low Rate Mode (LRM) over ice sheet interiors but will switch to highly detailed SARIn Mode over ice edges, combining returns from both antennas using a technique called interferometry. And over sea ice it will switch to SAR Mode, improving its spatial resolution.

In this mode, based on the character of its echoes it can be determined whether they come from open water or ice masses. Differences in altitude between the two can be used to measure the 'freeboard' of floating sea ice from which its total thickness can be derived.

The end results is an instrument that allows quantifying ice thickness on land, sea and at the boundaries of the two – where fluctuations due to climate change are most likely to be found.

He added that there is evidence that inter-annual sea ice in the Atlantic part of the Arctic Ocean is starting to thin - possibly influencing regional ocean currents in turn because salinity changes from sea ice freezing and melting help drive currents. However any conclusions are premature because sea ice in particular suffers a particular paucity of data – what is available mostly comes from submarine sonar surveys - but that CryoSat should make a big contribution.

A large part of the Workshop discussed calibration and validation activities for the mission. Such 'ground-truthing' is important for any remote sensing satellite, but especially for CryoSat because its signal will be sensitive to seasonal changes in the properties of snow and ice, including changing snow cover and ice densities. These factors have to be understood and corrected for in order to better detect longer-term changes.

The Workshop heard that a five-year schedule of ESA-coordinated calibration and validation activities had been laid out from 2003 to 2008. The first full-scale Cryosat Validation Experiment – Cryovex – was carried out over Arctic sea ice in 2003, with a second over Arctic land the following year. Following launch another major combined land-sea activity is planned for next year.

Widespread airborne data collection using laser, radar or electromagnetic instruments is an important part of these activities, with flight lines to be coincident as much as is possible so results can be compared together. Ground-based operations are also required, to measure seasonal snow variation, drill ice cores and plant GPS trackers, electromagnetic sensors and underwater sonar devices.

The Workshop discussed a range of supplemental validation activity due to occur across both the Arctic and Antarctic regions to gather datasets both able to validate Cryosat results and also scientifically useful in their right.

"Many of our users spend a lot of time working in ice regions, and they are very willing to contribute to validation activities," said Guy Ratier, CryoSat Project Manager. "One of the most useful parts of an event like this is being able to coordinate individual efforts to maximise their value."

The contribution of other satellites will also be useful first in validating CryoSat results and later in carrying out science. In particular NASA's ICESat was highlighted. Because this mission uses a laser altimeter, it is sensitive to the snow-air boundary while CryoSat's radar signal peers through snow to detect the ice-snow boundary – so the two spacecraft should complement each other well.

"We are very grateful to the teams doing very nice work gathering data in very difficult conditions, sometimes at temperatures of minus 35º and wind speeds of 40 miles per hour," said Wingham, concluding what he said had been a very successful Workshop. "We hope to return the favour in due course by doing some very nice work with this satellite."