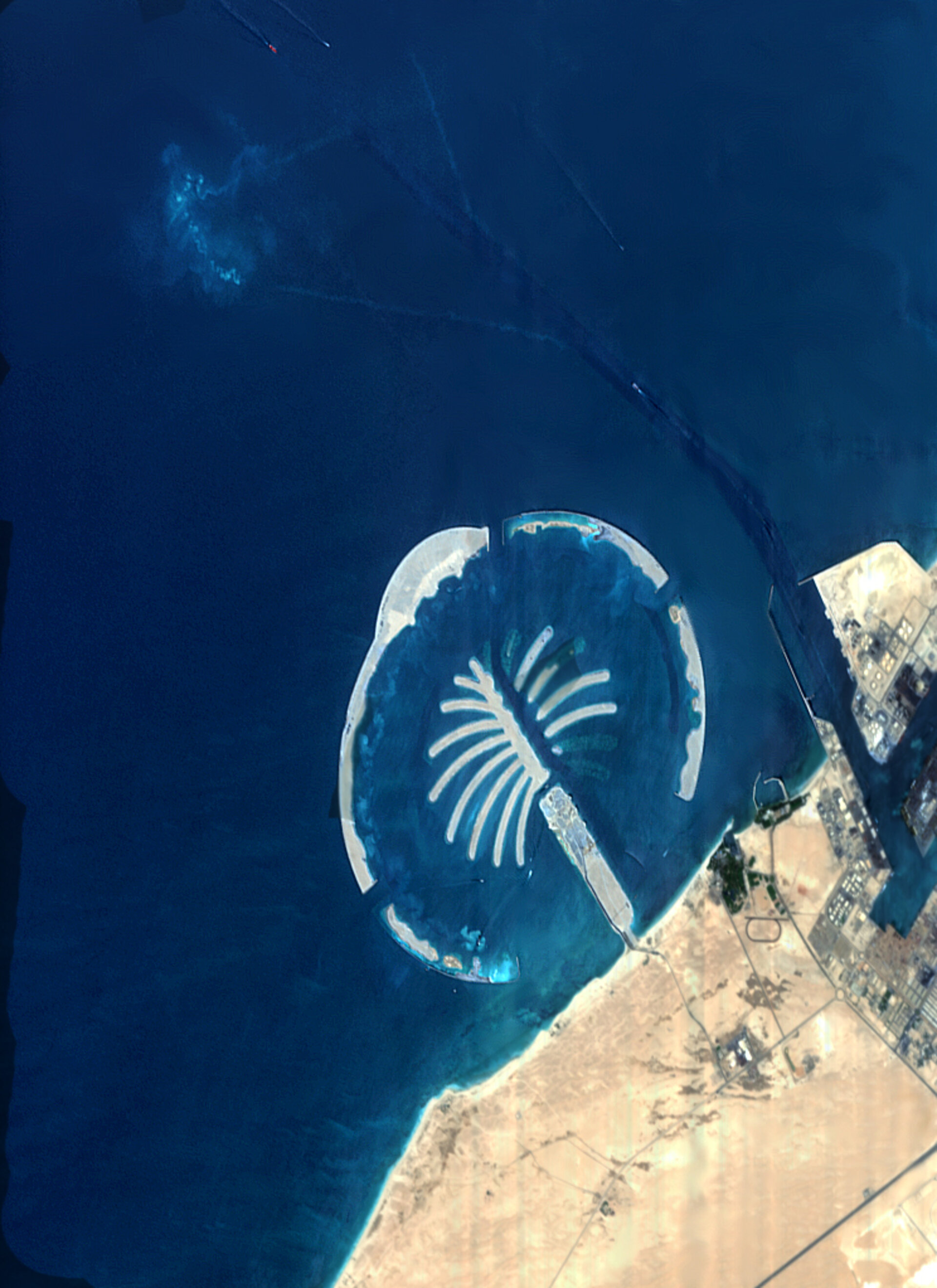 The Palm Jumeirah, located about 15 kilometres east of the Palm Jebel Ali, is much nearer completion, construction having commenced in June 2001 and due to finish in early 2006. Work on the Palm Jebel Ali, was started in October 2002 and is expected to conclude in late 2007. The largest of the three will be the Palm Deira, started in November 2004.

The islands are built in the shape of date palm trees, with a 300-metre-long 'trunk' bridge to the land, a crown with 17 fronds and a surrounding crescent island to serve as a breakwater. While the Palm Jumeirah is planned as a luxury residential area, the Palm Jebel Ali will serve as more of an entertainment destination, with a theme park and six marinas.

The islands are being built in shallow waters of the wide continental shelf found off Dubai, using millions of cubic metres of sand dredged from the approach channel to the Jebel Ali port – seen here adjacent to the artificial island named after it.

This approach channel is being deepened to 17 metres, and its route can be made out as darker than the water around it. Note also the sediment discolouring the water at the top of the image, possibly connected to this ongoing dredging activity.

The busy commercial port of Jebel Ali, located about 35 kilometres from the city of Dubai is itself artificial – reputedly the largest man-made harbour in the world, completed in 1979.

The Palms are just part of a larger programme intended to turn Dubai into a leading global tourist destination: the plan is to quadruple visitor numbers to 15 million by 2010. Other planned attractions include an underwater hotel called Hydropolis, the 800-metre high Burj Dubai tower and another archipelago of artificial islands shaped after the global map, known as 'The World'.

This image was acquired on 26 August 2005 by the Compact High Resolution Imaging Spectrometer (CHRIS). Built by UK-based Sira Technology, CHRIS is the main payload on ESA's Proba microsatellite, designed to acquire hyperspectral images with a spatial resolution of 18 metres across a range of 14 kilometres.