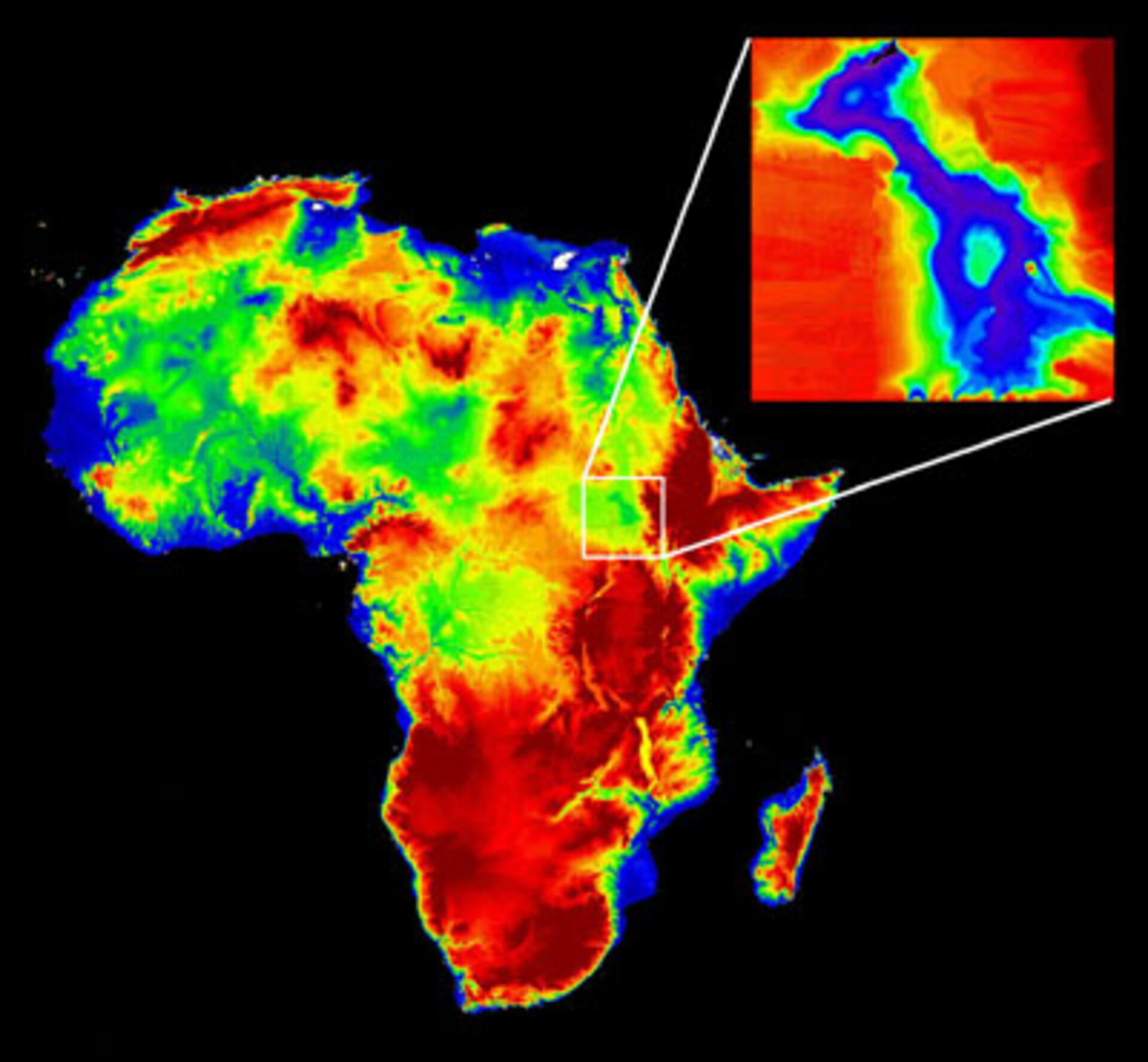 What do a 100 km-long river valley in East Africa, a waterfall bigger than Niagara in the Amazon jungle, and a monstrous wall 200 m high cutting a straight line across an African desert have in common? The answer is that they’ve all recently disappeared. To be more accurate, they were never there in the first place - but they appeared on thousands of maps. Those maps have now been superseded by a new kind of digital map, prepared from ERS radar altimeter data by a British team based at Leicester’s De Montfort University. Their results are being presented at the ERS-Envisat conference in Gothenburg this week.

"We now have the most accurate picture ever of the shape of the Earth’s surface, with over 100 million data points from the altimeter combined with the best of the existing ground survey data" says Professor Philippa Berry, who is leading the project. "In some parts of the globe we had to literally throw away 40% of the data from the earlier models because they were so inaccurate, and another 20% have been changed significantly." Previous efforts to build a so-called "digital elevation model" - a map of the height of every point on the Earth’s surface - have been based on data from the US Department of Defense and from digitising existing contour maps. "You can’t get any information on how the Defense Department data were gathered, or how accurate they are," comments Prof. Berry, "the contour maps may not have been accurate in the first place, and the method is very vulnerable to mistakes in transferring data from the paper maps to the digital model."

It is these problems that created the amazing disappearing waterfalls and river valleys - the result of mistakes in the source data, or discontinuities where two sets of data from different sources meet. One use of Digital Elevation Model (DEM) data is to help to create a `gravimetric map` which shows how the Earth’s gravity field varies - information which is vital to precise orbit calculations for satellites. It was the suggestion that aberrations in a recent global gravity model might be due to mistakes in the Digital Elevation Model used in its generation that encouraged Prof. Berry and her team to look into producing a new digital elevation model incorporating altimeter data.

The altimeter instrument flown on ERS-1 and ERS-2 was designed to look at the surface of the ocean, Prof. Berry explains. "Its processing model assumes the surface is flat, which is a perfectly reasonable approximation for the sea, but not for the land; the sea also gives a much ‘cleaner’ radar echo." To use the altimeter data for mapping continents, Berry’s team had to create software to re-work the raw data to interpret the complex echoes obtained over land using a suite of new purpose-built 'retracking' algorithms designed to cope with the different echo shapes from the rapidly varying topographic surface.

Initially, the team has concentrated on South America and Africa - which contain areas where the available data are particularly unreliable, because they are remote and inaccessible and therefore poorly surveyed on the ground. This new DEM can measure heights to an accuracy which varies from a few tens of metres down to less than 2m, for areas where altimeter derived data have been used.

"Many users were just not aware of the errors in these earlier models," comments Prof. Berry, "which could really destroy the work they were trying to do with them. I met a researcher in Africa who was trying to model the water catchment areas over a wide area; he’d had to abandon the project because the artefacts in the height data stopped his equations working at all." One of the results of Professor Berry’s work will be a "quality" map based on the DEM, showing how accurate the height data in that each place is likely to be. This map is necessary because the altimeter data do not yet cover the Himalayas or Andes or the very highest latitudes around the polar regions, so for these areas the new model will still have to rely on the existing ground based data. However, the radar altimeter due to fly on Envisat has been designed from the outset with land mapping in mind, and should be able to cope with significantly more extreme terrain than ERS-1 and 2, if not the most mountainous areas.

The new DEM, which will be commercially released in February 2001 has many applications. Professor Berry explains: "DEMs are used in climate models - the latest ones are being developed with a 1 km grid, so they’ll need our model; they are also used for geological surveys; you can use them to predict how water will move around the landscape; you can plan the coverage of radio transmitters for telecommunications; and you can plan routes for roads or locations for dams. We even had some Australian surveyors who wanted to use our DEM for to make maps of Brazil because the local ones are so inaccurate. The scale of our model is a bit big for navigation, but at least the valleys are really valleys and the hills are really hills!"