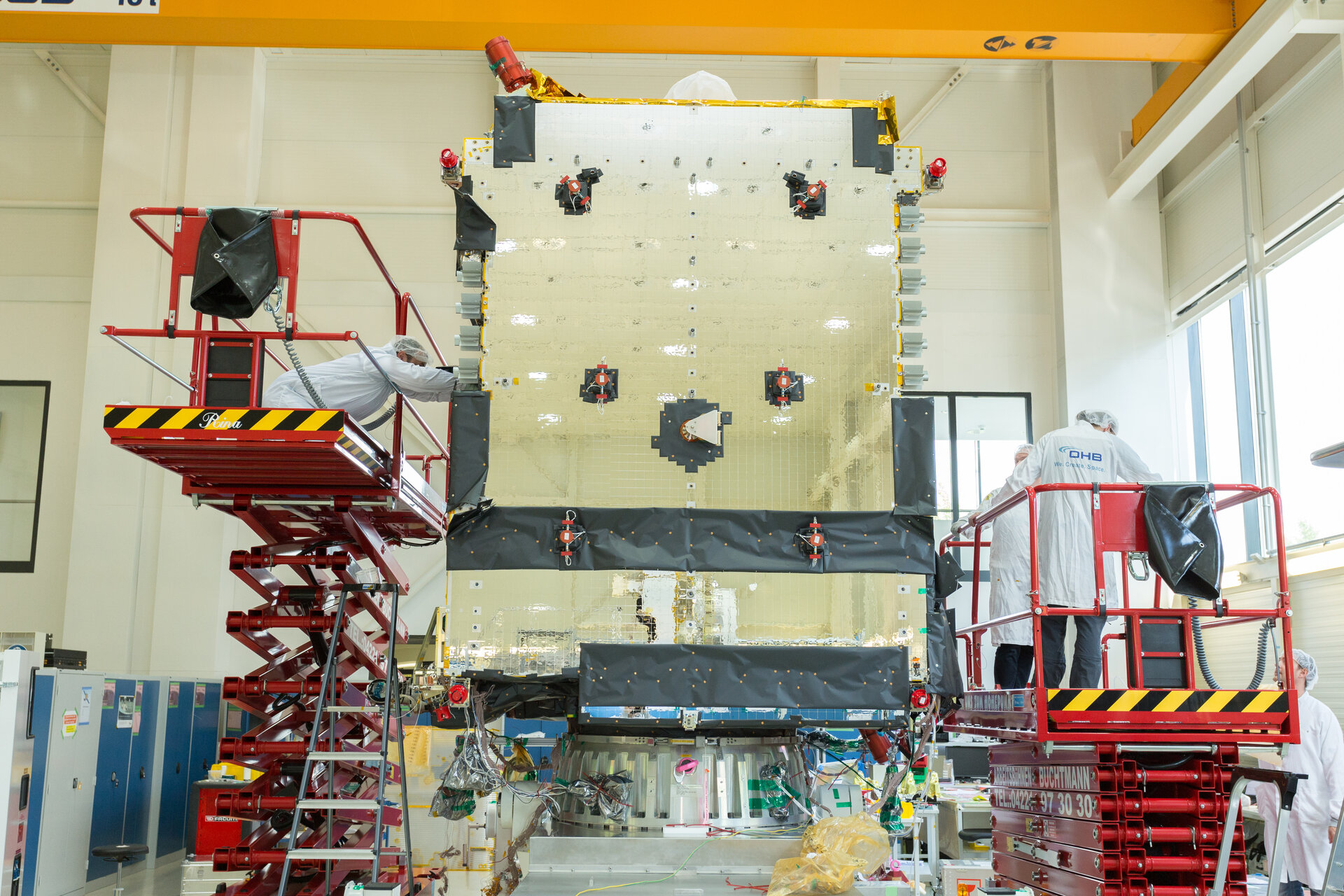 ESA’s laser satellite EDRS-C has settled at its new home in Munich for the last tests before launch.

This final set will make sure the satellite and its optical payload can withstand the challenging conditions of lift off and subsequent life in space once launched next year.

The European Data Relay System is a unique public–private partnership between ESA and Airbus, with EDRS-C being the first dedicated satellite. The first node, EDRS-A, was launched to geostationary orbit in 2016 as a hosted payload.

The system – nicknamed the SpaceDataHighway – provides data relay between low orbiting satellites and the EDRS nodes over optical links, with the information sent down to Europe in near-real time.

EDRS-C arrived at IABG Munich after a day and a half on the road across Germany at the end of May, from its previous home at OHB System AG in Bremen.

Bremen was where the satellite developed from a collection of circuit boards to its current form as a close-to-fully fledged satellite, standing at nearly 4 meters tall.

It passed several integration and testing milestones at OHB, including the platform and payload mating, and the installation of its Laser Communication Terminal (LCT), which was developed by Airbus subsidiary Tesat Spacecom, with support from the DLR German Space Administration.

The LCT forms the backbone of EDRS, providing the means by which the satellites connect to their targets and collect the data. An identical terminal on board EDRS-A has now made more than 10,000 successful links to the European Union’s Copernicus Sentinels-1 and -2, relaying in excess of 500 terabytes of the Earth observers’ findings.

To ensure the EDRS-C terminal is prepared for similar operational reliability, the instrument has undergone thorough alignment and health checks since being integrated with the satellite in March 2017.

In total, the satellite as a whole was subject to and passed more than 90 tests in Bremen, which were designed to check all was working as it should as the spacecraft took shape. The results of these tests will also serve as a map of reference points to compare the satellite and its equipment’s performance to after the tests in Munich, which will put them through their paces in a simulated operational environment.

The process of preparing for the 32 hour, cross-country trip was a careful, meticulous task.

Hundreds of electrical cables had to be carefully disconnected over the course of several days and packed away, at which point the spacecraft itself was moved into a specially designed sealed container that replicated the temperature and humidity of the OHB cleanroom, while recording any vibrations or violent movements during the trip.

Once at IABG, the process was reversed, with all elements unpacked and carefully checked over the course of several days.

Particular attention was paid to the delicate external instruments such as the star tracker and thrusters.

All this care paid off, however, as EDRS-C and its components passed all inspections with flying colours, and the environmental testing campaign can begin in earnest.

The spacecraft is currently being prepared for the first of the set, the thermal vacuum test, which will subject it and its equipment to the intense temperature fluctuations of space, while replicating the same vacuum-like conditions.

Michael Witting, EDRS Project Manager, said: “The shipment to IABG represents a key milestone for the project: the satellite design and integration phases are over and the testing can start.

“Although we and our partners have a great deal of work ahead, the satellite has done very well so far, so we are looking forward to more good performance in preparation for launch next year.”