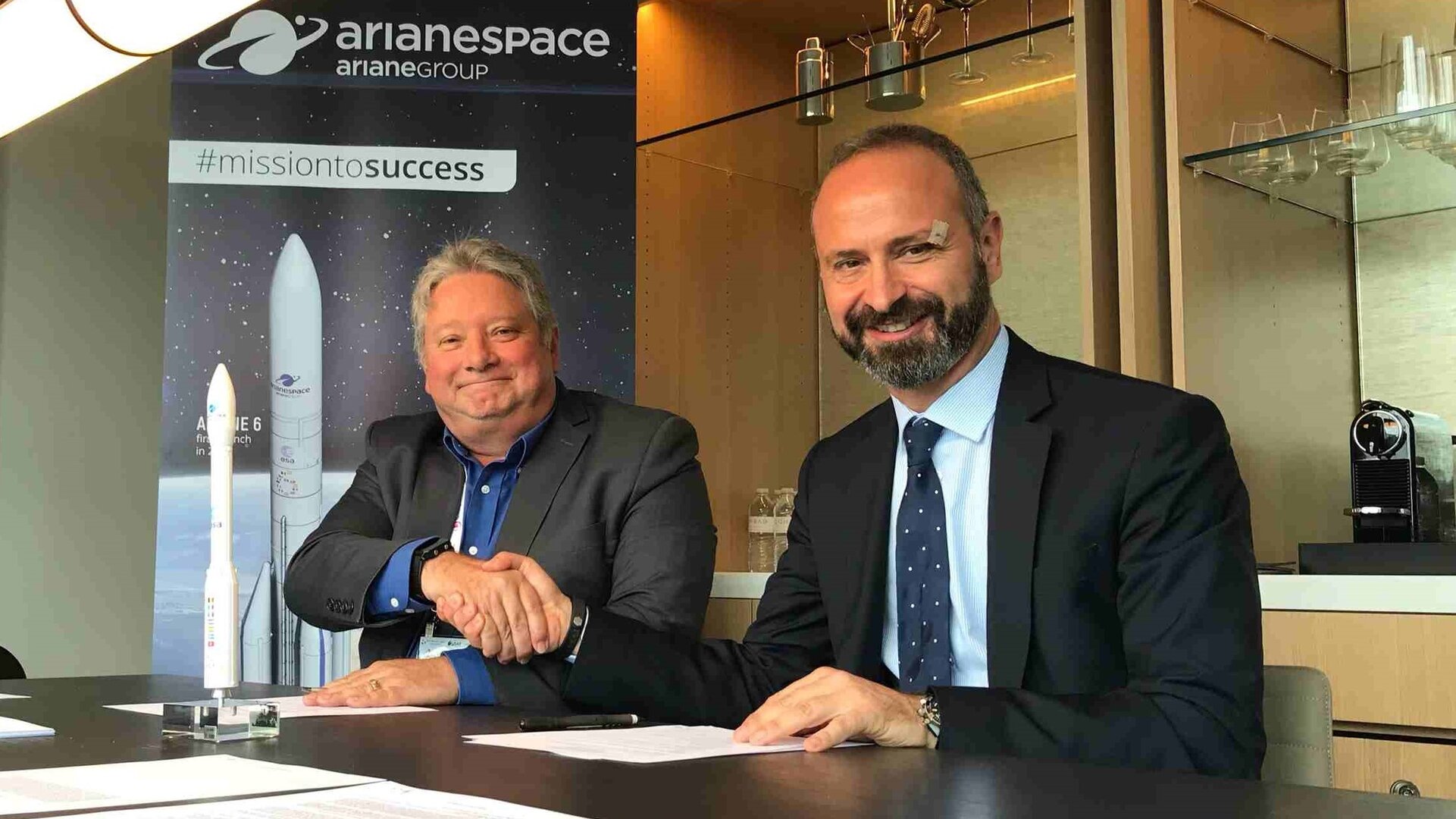 The first commercial microsatellite developed under ESA’s SAT‐AIS programme for tracking ships, called ESAIL, has passed another milestone. On 9 May its Canadian operator exactEarth signed the launch service agreement with Arianespace.

ESAIL is part of ESA’s Partnership Projects and has been developed to enhance the next generation of space‐based services for the maritime sector. The spacecraft will track ship movements over the entire globe as it orbits the planet.

Satellite coverage is essential as about 90% of global trade takes place on the oceans. It opens the door to enhanced safety, tracking ships and route provisions for industry, government and maritime authorities.

Terrestrial AIS antennas needs direct line of sight with the vessels, however, so the system is limited by the curvature of the Earth. Satellite automatic identification systems, or SAT‐AIS, have no such restrictions and can receive messages from ships on the open ocean, enabling authorities to follow vessels’ movements throughout their entire voyage.

The ESAIL satellite is built by LuxSpace for the exactEarth constellation of AIS satellites, through an ESA’s Partnership Project together with the Luxembourg Space Agency and other ESA member states.

The satellite flight model has completed its environmental tests in Centre Spatial de Liège in Belgium, where it was exposed to mechanical vibration testing, simulating the violence of a rocket launch, as well as to the extreme temperatures and vacuum simulating the near Earth orbital environment.

The satellite is going through the final steps to be ready for launch in August.

Peter Mabson, chief executive of exactEarth, said: “We are looking forward to adding ESAIL to our industry-leading global maritime satellite constellation, which now consists of more than 60 in-orbit high performance satellite assets. The capabilities on ESAIL will allow us to continue to advance the state-of-the-art in maritime vessel tracking and data services, and will pave the way for future capabilities. I would like to thank ESA and LuxSpace and their satellite manufacturing team for their accomplishments in producing this leading-edge microsatellite.”

Stephane Lascar, Head of Telecommunication Satellite Programmes at ESA, said: “ESA’s Partnership Projects offer the most appropriate scheme for private and public entities to de-risk investments and answer market needs. They maximise benefits to industry, thanks to ESA’s efficient co-management tailored to commercial practices. ESAIL demonstrates once again ESA’s capacity to federate operator, industry and small and medium-sized enterprises around challenging programmes, achieving competitive leaps forward and economic impact. I should like to thank our partners and participating states for their trust and close cooperation.”

Marc Serres, Chief Executive of the Luxembourg Space Agency, said: “This maritime microsatellite built in Luxembourg by LuxSpace, in partnership with ESA and exactEarth, demonstrates how a private company and the European Space Agency can closely work together to develop a new commercial product. ESA has been a key partner in developing the technical skills needed to compete in a highly demanding commercial space market. As a European leader in commercial space, Luxembourg is following a unique space strategy focused on creating an attractive ecosystem for NewSpace companies and innovative space entrepreneurs.”

ESAIL is a pioneering project for LuxSpace, who are also developing a multi‐purpose, modular platform called Triton‐X. Triton‐X will build on the manufacturing and testing heritage gained by LuxSpace through ESAIL, using New Space‐style off-the-shelf components to deliver a fully fledged satellite within months.

Thomas Görlach, Chief of the Executive Board at LuxSpace, said: “ESAIL is a major milestone for us as a microsatellite solution provider. It enabled us to build and integrate a sophisticated microsatellite while using commercial off the shelf components and thus reducing time for testing and launch qualification. The emerged synergies paved our way towards commercial space. We have gained very valuable experiences and knowledge through ESAIL which serve as inputs for our next milestone: the Triton‐X platform.”