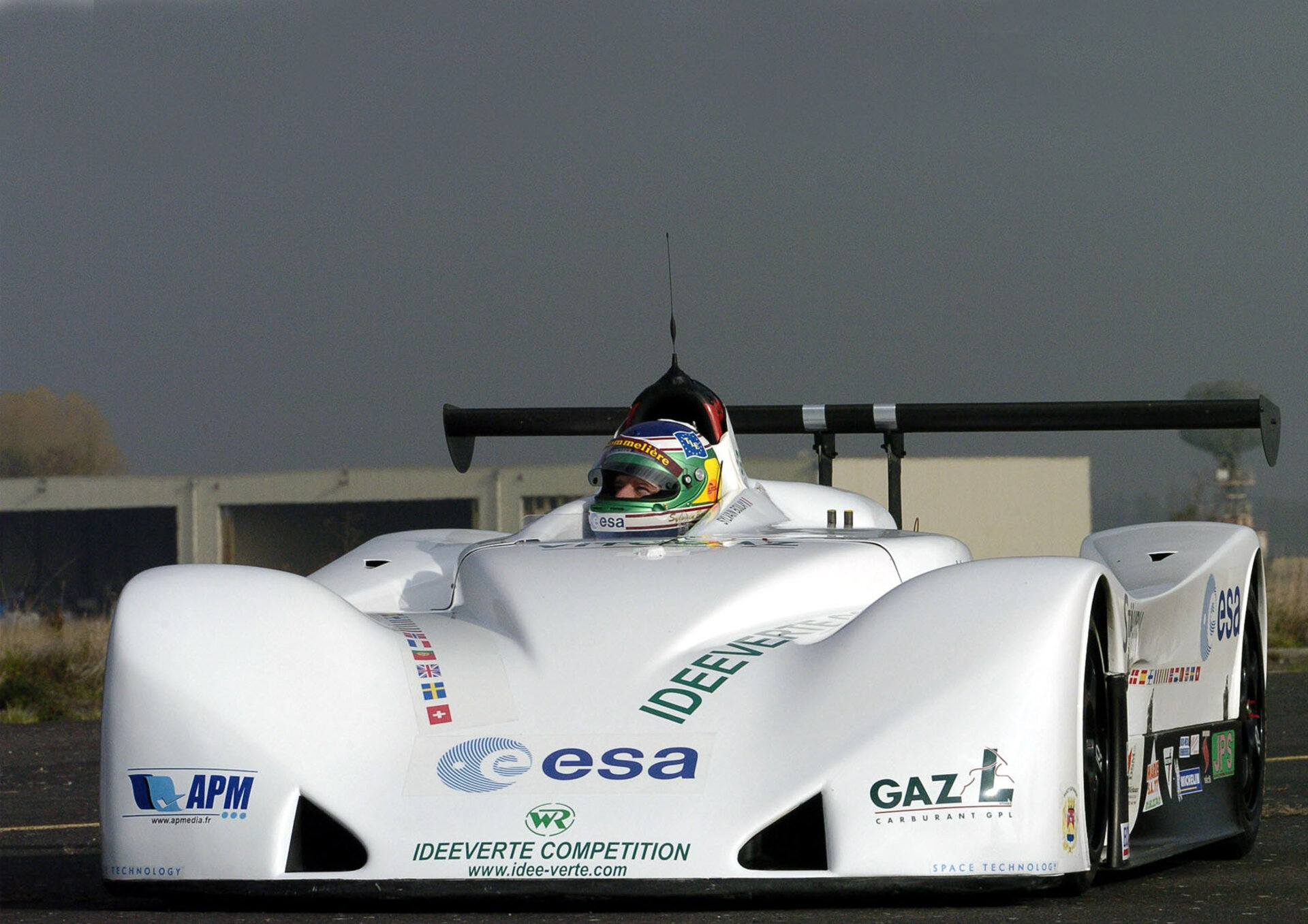 When the non-profit organisation IdéeVerte Compétition decided to create a 'green' racing car, they turned to space technology to make it safer. Running on liquefied petroleum gas, one of the least polluting fuels, and lubricated with sunflower oil, the car is protected against fire hazards by space materials. 'Green' does not have to mean slow - last week the car set a new speed record of 315 km/h.

"The car of the future will have to respect the environment. This is the only way to create a sustainable transportation system in our world," says Alain Lebrun, President of the IdéeVerte Compétition. "Today there are many new technologies available which have low impact on the environment. We also have more sustainable energy sources available such as liquid natural gas (LNG), liquefied petroleum gas (LPG), biofuels, hydrogen and fuel-cells.

"What better way to raise public awareness than putting them to the best test of all: developing a racing car?" asks Lebrun. "The racing track is the ultimate laboratory and also a fantastic place to display the ‘green’ car technology to come."

In 1993 the IdéeVerte Compétition was founded as a non-profit organisation made up of independent engineers and technicians concerned about the environment and the pollution generated by today's cars. As motor sport enthusiasts, the objective was to create a non-polluting racing car.

The head of ESA’s Technology Transfer and Promotion Office (TTP) Pierre Brisson explains, "in 2002 we decided to support the project by making available advanced space technologies. We have always been keen to support programmes related to environmental protection, especially in the motor field and, together with the IdéeVerte racing team, we identified several space technologies to help them improve safety, in particular to reduce the fire risk."

Altogether four technologies from space programmes are used in the racing car to improve overall safety by reducing the risk of fire and its effects.

"The primary fire hazard in an LPG fuelled high-performing racing car such as this is the possibility that heat from the engine and the exhaust will ignite parts of the car. Therefore, the first thing we did was to install very good heat insulation material designed for ESA's Ariane launchers," explains Nicolas Masson from Bertin Technologies. Bertin Technologies, part of ESA's TTP network of technology brokers, has participated in bringing together the different industrial partners.

Notes Nicolas Masson, "it would also be a good idea to use this insulation technology around a standard exhaust system on petrol-driven cars, as the catalytic converter would heat up more quickly and operate better".

To protect the LPG fuel tank, another heat insulation technology was chosen: a special thermal, shield developed for the engines used by the Ariane launchers. In case of engine fire, this shield blocks the heat transmission so well that the fire must burn for at least 45 minutes before the tank is heated to a level where the pressure will open the safety valve. This gives plenty of time for the fire extinguishers, also originating from space developments, to put the fire out.

Nicolas Masson emphasizes that "without the Ariane thermal shield the fire would heat the fuel tank so fast that the pressure would open the safety valves within five minutes and the gas that escaped would feed the fire with potentially catastrophic results. This technique could be applied right away to cars that run on LPG to make them safer".

Space technology has also been used for the LPG fuel tank and the fire extinguishers. The fuel tank is made of a special lightweight titanium developed by aerospace engineers as it withstands shock better than steel. The technology used for the three fire extinguishers on the car comes from the Russian launchers and is similar to the pyrotechnical engines used in the airbags installed in today’s cars. These can be activated either manually by the driver or automatically by a security control unit connected to sensors that measure engine temperature, fire and escaping gasses.

LNG - Liquefied natural gas - is natural gas in its liquid form. When natural gas is cooled to minus 161 degrees Celsius, it becomes a clear, colourless, odourless liquid. LNG is neither corrosive nor toxic. Natural gas is the cleanest burning fossil fuel. It produces less emissions and pollutants than either coal or oil.

LPG - Liquefied petroleum gas - propane or (less commonly) butane, is obtained by extraction from natural gas or from refinery processes. Pressurised in metal bottles or tanks, LPG is easily handled and readily lends itself to a variety of applications as a fuel, refrigerant and propellant in packaged aerosols. The emission from cars running on LPG is far less lower than that from a petrol car.

Biofuels are any substitute fuel made from renewable non-fossil organic materials, such as wood, waste and alcohol fuels, burned to produce energy. Biofuels include also ethanol, biodiesel and methanol. Biofuels do not add new carbon to the atmosphere.