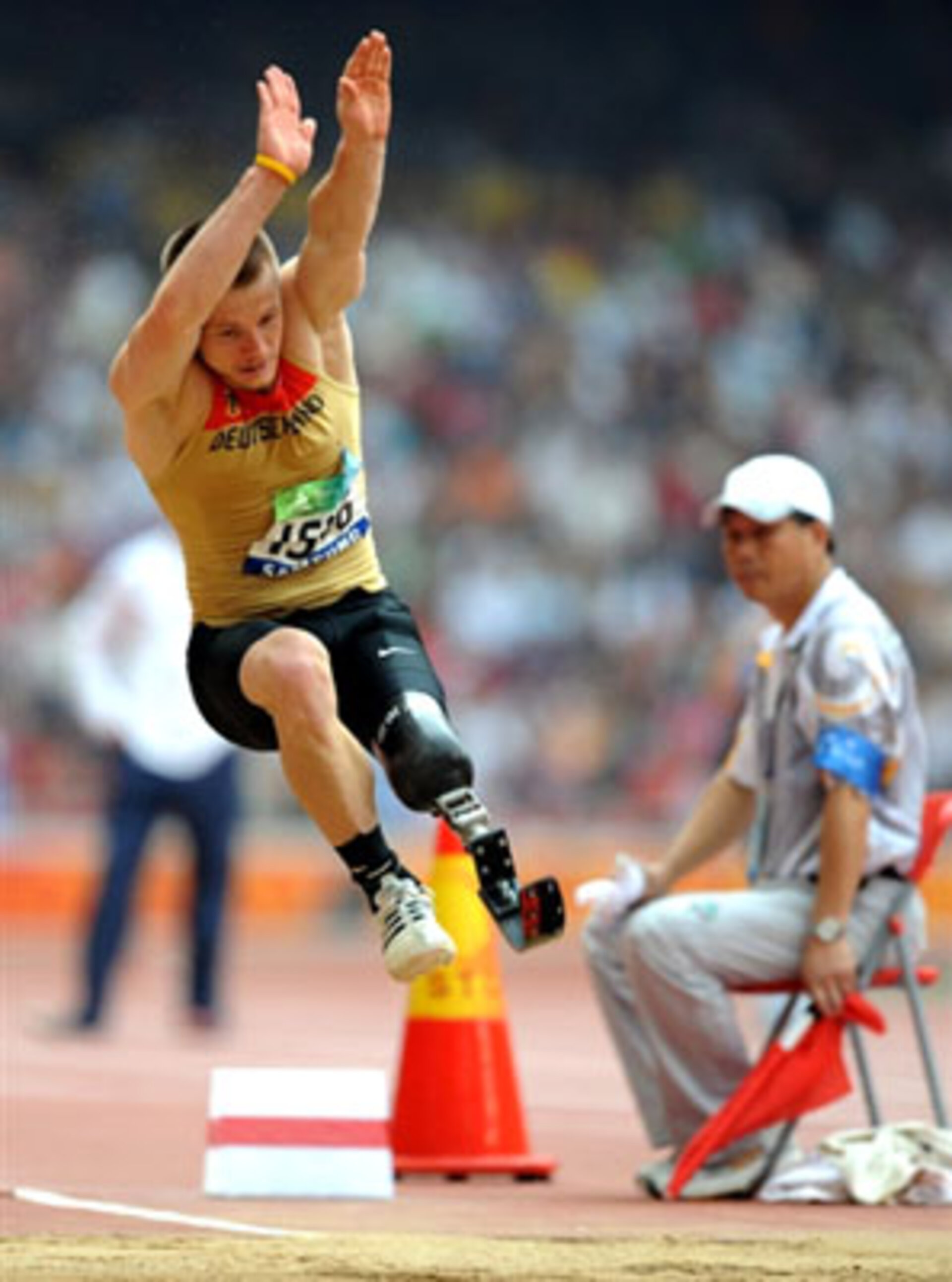 German athlete Wojtek Czyz, running with a space-tech enhanced prosthetic leg, set a new world record at the Paralympics 2008 in Beijing, reaching an amazing 6.50 m and beating the previous world record by 27 cm.

In spring 2004, ESA’s Technology Transfer Programme (TTP) technology broker MST Aerospace met with Wojtek Czyz and his trainer to perform a pre-screening of the most crucial elements of the prosthesis used by Czyz. Having lost part of his left leg three years before in a sports accident, he now uses a prosthesis in two athletic disciplines: long jump and sprint competitions.

"The objective was to see how to improve his performance, and we found the most important problem was related to a connection angle, the so-called L-bracket, between the knee joint and the foot module," explains Dr Werner Dupont, MST Aerospace Managing Director.

"In collaboration with the German company ISATEC, we developed a new L-bracket using materials originating from the Alpha Magnetic Spectrometer (AMS), an instrument that will be mounted on the International Space Station to study extraterrestrial anti-matter, matter and missing matter."

The advantage of these space materials is that they are extremely strong and at the same time lighter than conventional products available, both important advantages for top athletes’ performance. The problem with Czyz’ previous prosthesis was that it tended to break when he performed to the maximum of his capacity.

At the previous Paralympics Games in Athens Czyz competed with a space-tech enhanced prosthetic leg and won a gold medal in three disciplines: 100 m sprint, 200 m sprint and long jump.

Following this success, MST and ISATEC, a German engineering company dealing with light materials, continued to work on improving the prosthesis. In a series of investigations undertaken by MST, including a number of advanced calculations on the dynamic performance of the materials done by ISATEC, a single-part foot module made in carbon fibre reinforced plastics proved to be the most promising solution for a sprint prosthesis.

For the long jump discipline, the previous design consisting of an L-bracket and a foot module was proven to be the most efficient.

"We first started working on improving the prosthesis for the sprint discipline, and then further improved the long jump prosthesis as well," continues Dupont.

"This latest development turned out to be a great success at the Paralympics 2008, and helped Wojtek Czyz beat the world record by an incredible 27 cm."

"The use of lighter and extremely strong space materials in the development of new prostheses for top athletes has proven its worth both in Athens in 2004 and now again in Beijing in 2008. The next step, which we are already looking into with our partners, is to use this expertise for similar developments of prostheses for other disabled people."

ESA's Technology Transfer Programme Office (TTPO) with its network of technology brokers facilitate the use of space technology and space systems for non-space applications, demonstrating the benefit of the European space programme to European citizens.

For editors:
The Alpha Magnetic Spectrometer (AMS) is a particle physics experiment that is to be mounted on the International Space Station designed to search for various types of unusual matter by measuring cosmic rays. It is an international collaboration involving 500 scientists from 56 institutions and 16 countries. Final assembly was done at CERN and thermal/vacuum testing was performed by ESA before its shipment to the Kennedy Space Center. AMS is planned to be delivered to the ISS by the Space Shuttle in 2010.