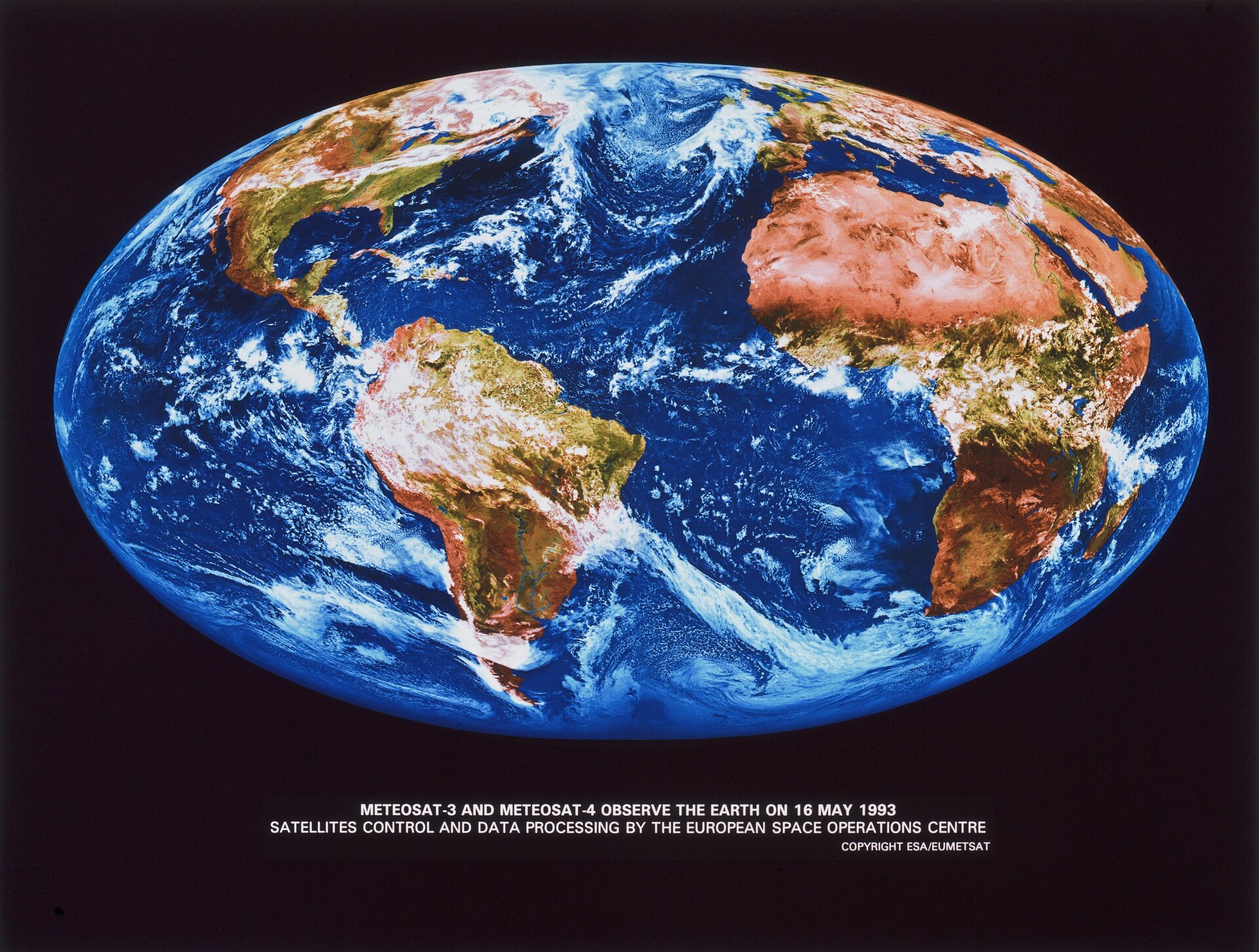 Composite view of Earth as observed from geostationary orbit by ESA's Meteosat 3 and 4 weather satellites on 16 May 1993. Taken from vantage points at 50°W and 0° longitude, the picture shows the Americas, the Atlantic Ocean, Europe, Africa and part of Asia.

From 1991 to 1993, Meteosat 3 was moved to 50° W for an Atlantic Data Coverage (ADC) mission, following the loss of the U.S. GOES-5 satellite and the imager failure on GOES-6 that left the Americas with only partial weather coverage. In 1993, the satellite was moved to 75° W as a new relay station in Wallops Island, Virginia, allowing remote control from ESA's space operations centre (ESOC) in Darmstadt, Germany, without direct visibility. Meteosat 3 performed successfully until GOES-8 was able to take over in 1995. The satellite was eventually retired in November 1995 and boosted into a graveyard orbit.

The first generation of Meteosat satellites was developed for ESA by an industrial team led by Aerospatiale (now Alcatel Space). Three prototypes were launched in 1977, 1981 and 1988. Three more satellites followed in 1989, 1991 and 1993 under the Meteosat Operational Programme (MOP). These satellites were procured and operated by ESA on behalf of Eumetsat, the European Meteorological Satellite organisation. Meteosat 7, the last first generation satellite, was launched in 1997 as a gapfiller under the Meteosat Transition Programme (MTP).

Meteosat satellites, weighing about 700 kg at launch, were equipped with a scanning imaging radiometer that returned three visible and infrared full-disc images of the Earth every 30 minutes. Meteosat satellites were also operated over the Americas in 1991-95 and over the Indian Ocean since 1998 to ensure complementary weather coverage.

A second generation of satellites was developed on behalf of ESA by an industrial team led by Alcatel Space under the Meteosat Second Generation (MSG). The new satellites are about 2.5 times bigger than their first generation predecessors and able to deliver 20 times as much information. They are also enhanced to provide digital data to feed numerical weather prediction models.