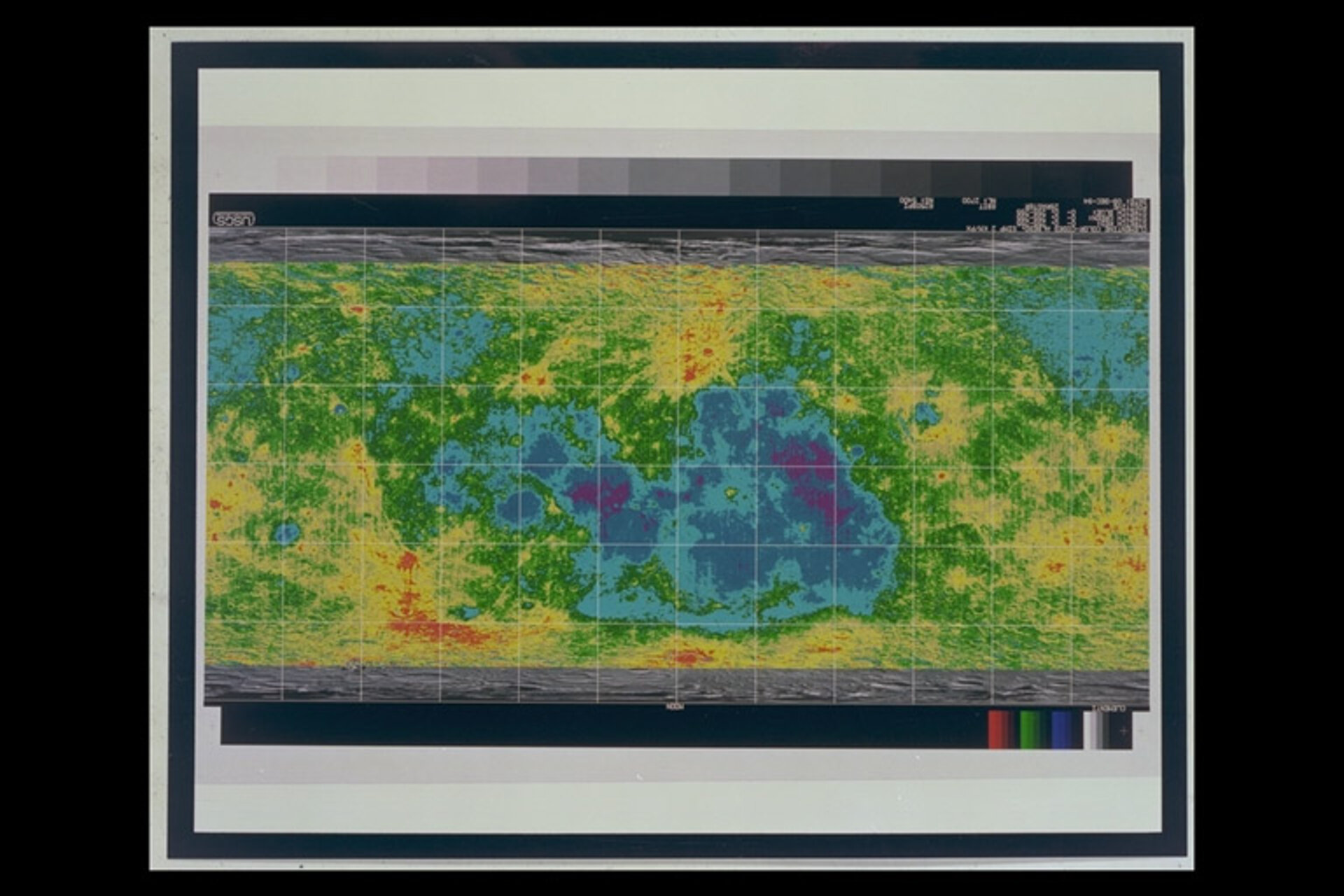 Clementine albedo map of the Moon

About 50,000 Clementine images have been processed and mosaicked to produce a global map of the Moon's reflectivity at a wavelength of 750 nm. This provides the best albedo map to date for most of the far side. Although the images were acquired at a resolution of about 100 m/pixel, they have been reduced to 1 km/pixel for this preliminary effort. Pre-flight calibration was used, which does not fully correct a brightness gradient across each frame, and this results in the striping seen here. Several gaps, where the data has not been processed, were filled by interpolation. Also shown is a colour-coded version of the albedo map in Simple Cylindrical map projection at 2 km/pixel resolution. Darkest to brightest surface areas are portrayed by the colour sequence purple-turquoise-green-yellow-red. Albedo provides first-order information on surface composition and/or soil maturity. The darkest materials (dark purple) correspond to titanium-rich mare lavas and dark-mantle deposits. These dark patches, which cover about 2% of the Moon's surface, are present only on the near side. Dark turquoise areas correspond to other maria, as do some of the light turquoise areas. Extensive greenish and yellowish areas correspond to highland terrains. Light turquoise/dark green areas often correspond to mixed mare-highland soils, such as much of the giant South Pole Aitken basin (south-central far side). Several large circular light turquoise-dark green areas on the far side correspond to degraded impact basins. One such region, near the crater Campbell (north of Mare Moscoviense), may represent a previously-unrecognised impact basin. The brightest (red) spots correspond to the most recent (younger Copernican) impact craters and ejecta, covering 2% of the lunar surface. Many new identifications of Copernican craters will be possible with the Clementine dataset, which will help us to understand the impact flux on the Earth and Moon during the past billion years, and which has profoundly influenced the evolution of life on Earth. The brightest crater seen on the Moon at this scale is Giordano Bruno, which must be one of the most recent large craters (>20 km diameter) on the Moon, probably less than about 50 million years old. [Image Date: 23-12-95] [97.03.007-001]