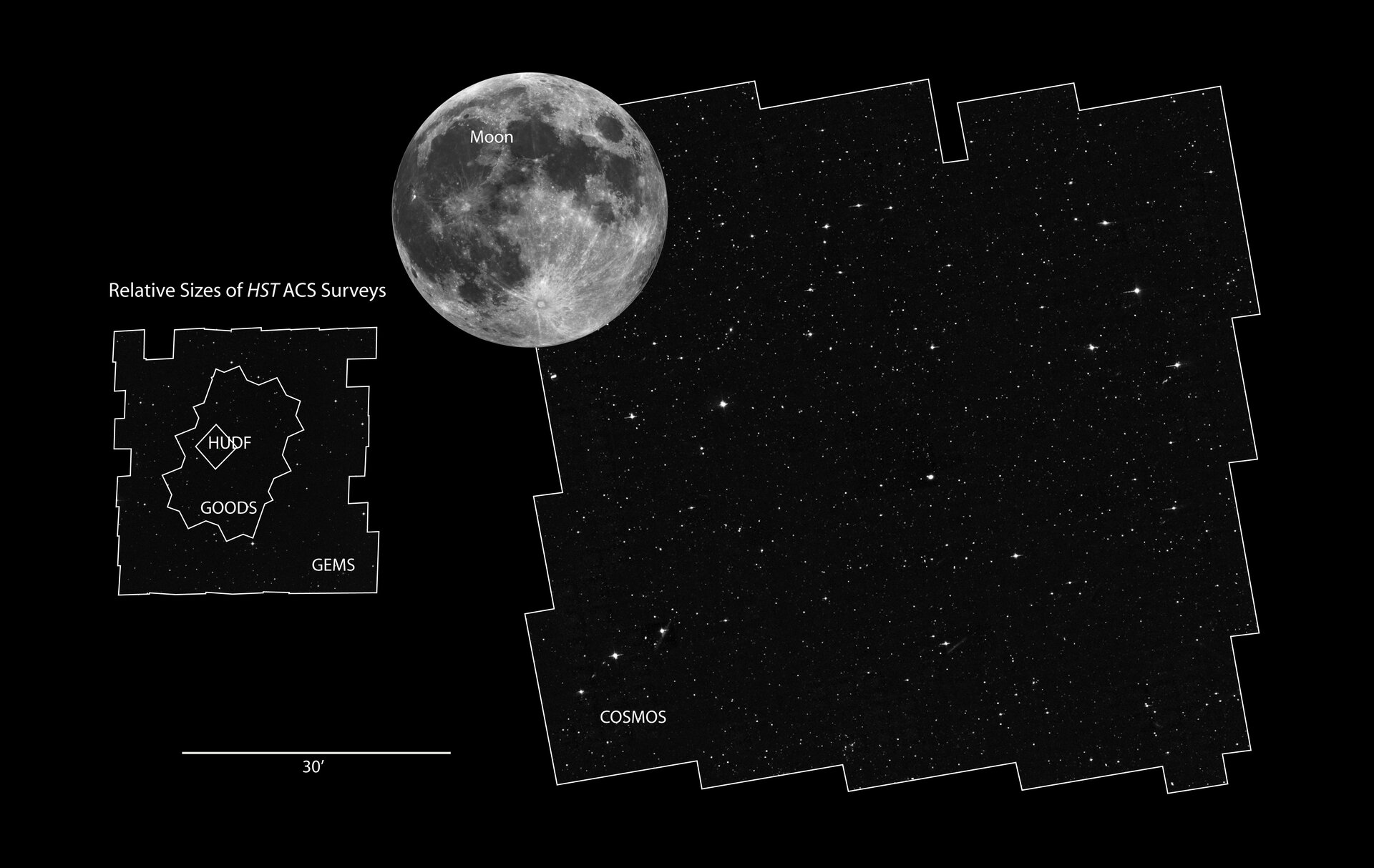 The Hubble Space Telescope has a narrow field of view, which is only a fraction of the angular diameter of the Moon. Certain research programs have devoted a substantial amount of Hubble observing time to survey comparatively larger areas of sky to address a wide range of galaxy evolution and cosmological questions. This is accomplished by assembling mosaic images taken with Hubble’s cameras. These surveys constrain the star formation history of the universe, probing the faintest galaxies and tracking the origin, structure, and merger history of galaxies as they evolve.

[Right] – COSMOS. The Cosmological Evolution Survey (COSMOS) is the largest Hubble mosaic of the sky. It covers two square degrees of sky. By comparison, the Earth’s moon is one-half degree across. The survey detected over 2 million galaxies spanning 75 percent of the age of the Universe. The field is being imaged by most major space-based and ground-based telescopes.
[Left] - Several survey fields are shown for comparison.

GEMS
Galaxy Evolution from Morphology and Spectral Energy Distributions (GEMS) imaged an area of 900 square minutes of arc on the sky with the Hubble Space Telescope’s Advanced Camera for Surveys. This contiguous field is centred on the Chandra Deep Field South, a deep X-ray telescope survey of the universe. GEMS contains roughly 10,000 galaxies down to a depth of 24th magnitude.

GOODS
The Great Observatories Origins Deep Survey (GOODS) unites extremely deep observations from Hubble with NASA's other space observatories (the Spitzer Space Telescope and the Chandra X-ray Observatory, and the XMM-Newton telescope), as well as observations by the most powerful ground-based telescopes. GOODS covers a total of roughly 320 square arc minutes.

HUDF
The Hubble Ultra Deep Field is humankind’s farthest view into to the Universe in visible light, uncovering several thousand galaxies down to 31st magnitude. The field of view is one Hubble Advanced Camera for Surveys wide field frame.