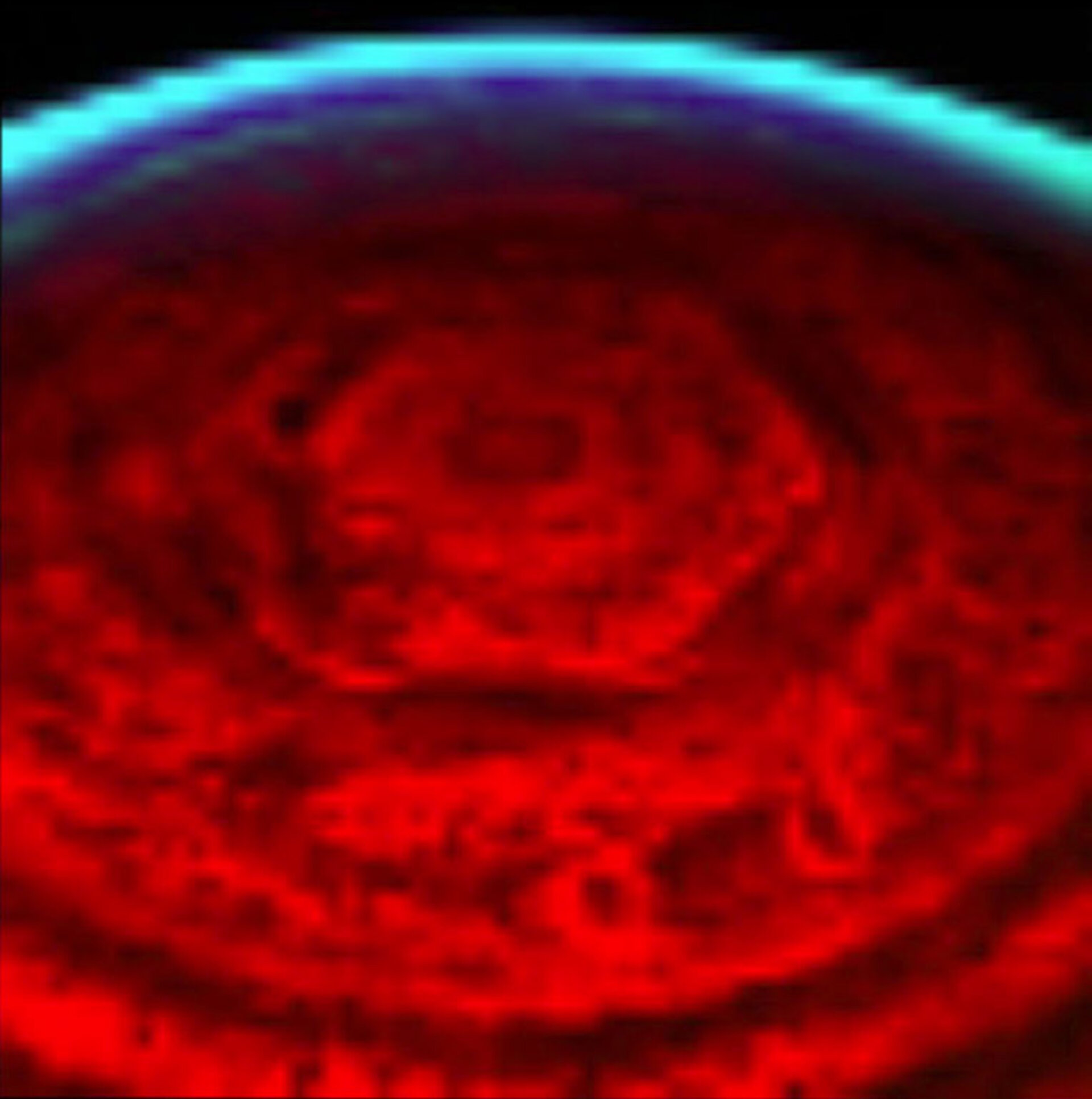 This nighttime view of Saturn’s north pole by the visual and infrared mapping spectrometer (VIMS) onboard NASA’s Cassini orbiter clearly shows a bizarre six-sided hexagon feature encircling the entire north pole. This is one of the first clear images taken of the north polar region ever acquired from a unique polar perspective.

In this image, the red color indicates the amount of 5-micron wavelength radiation, or heat, generated in the warm interior of Saturn that escapes the planet. Clouds near 3-bar (about 100 kilometres deeper than seen in visible wavelengths) block the light, revealing them in silhouette against the background thermal glow of Saturn. The bluish color shows sunlight striking the far limb (edge) of the planet, showing that the entire north pole is under the nighttime conditions characteristic of polar winter, as on Earth.

This image is the first to capture the entire feature and north polar region in one shot, and is also the first polar view using Saturn’s thermal glow at 5 microns (seven times the wavelength visible to the human eye) as the light source. This allows the pole to be revealed during the persistent night-time conditions under way during winter. The hexagon feature was originally discovered by NASA’s Voyager spacecraft in 1980, but those historic images and subsequent ground-based telescope images suffered from poor viewing perspectives, which placed the feature and the north pole at the extreme northern limb (edge) in those images.

In the new infrared images, the strong brightness of the hexagon feature indicates that it is primarily a clearing in the clouds, which extends deep into the atmosphere, at least some 75 kilometres underneath the typical upper hazes and clouds seen in the daytime imagery by Voyager. Thick clouds border both sides of the narrow feature, as indicated by the adjacent dark lanes paralleling the bright hexagon. This and other images acquired over a 12-day period between Oct. 30 and Nov. 11, 2006, show that the feature is nearly stationary, and likely is an unusually strong pole-encircling planetary wave that extends deep into the atmosphere.