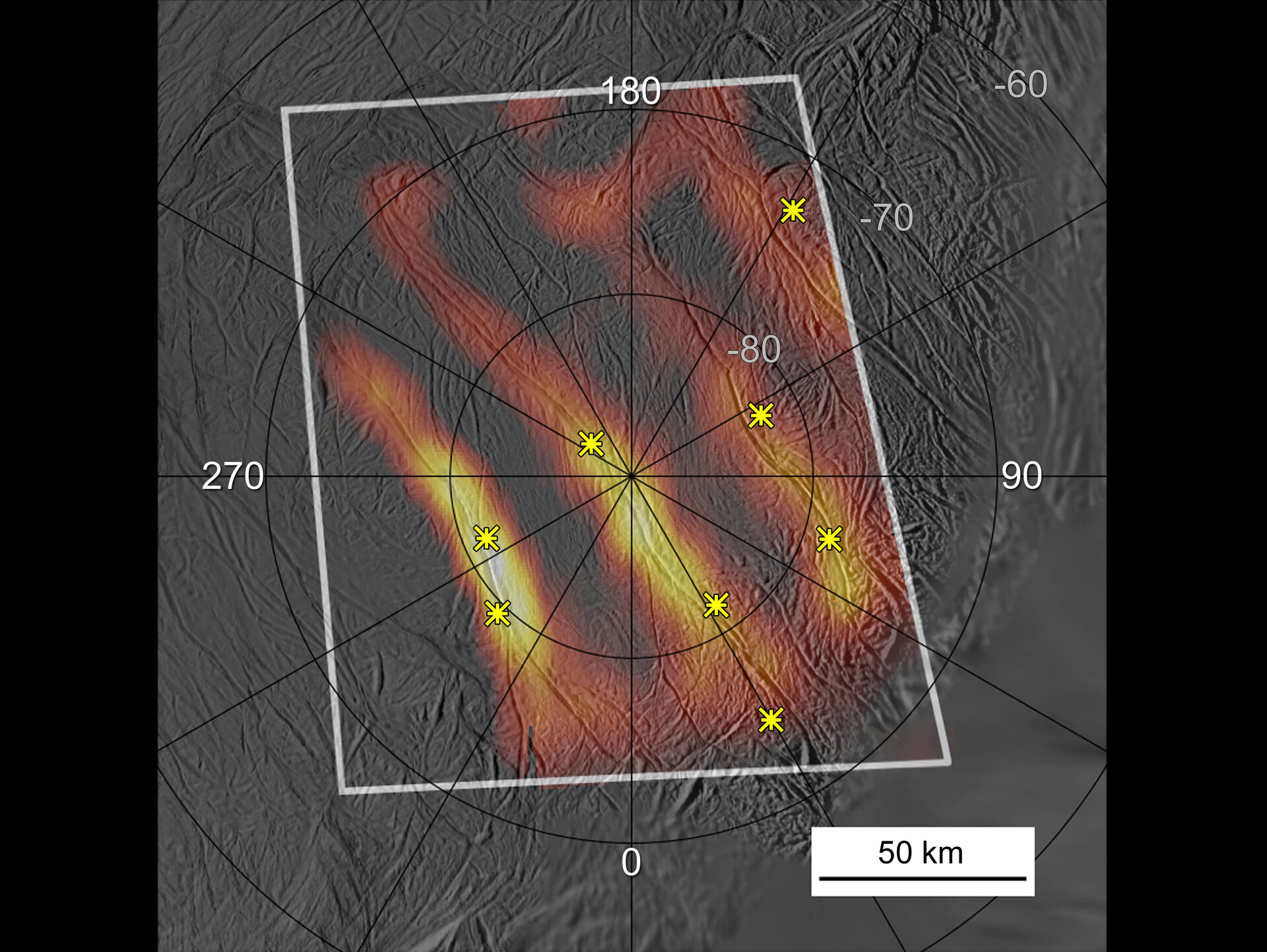 Heat radiating from the entire length of 150 km-long fractures is seen in this best-yet heat map of the active south polar region of Saturn's ice moon Enceladus. The warmest parts of the fractures tend to lie on locations of the plume jets identified in earlier images, shown in the annotated version with yellow stars. The measurements were obtained by the Cassini spacecraft’s Composite Infrared Spectrometer from the spacecraft’s close flyby of the moon on 12 March 2008.

Remarkably high temperatures, at least 180 Kelvin were registered along the brightest fracture, named Damascus Sulcus, in the lower left portion of the image. For comparison, surface temperatures elsewhere in the south polar region of Enceladus are below 72 Kelvin.

Heat is escaping from Enceladus' interior along these warm fractures, dubbed "tiger stripes," which are also the source of the geysers that erupt from the polar region. The infrared radiation was mapped at wavelengths between 12 and 16 micrometres. The infrared data, shown in false colour, are superimposed on a greyscale image mosaic of the south pole obtained by Cassini's cameras on 14 July 2005, during the previous close Enceladus flyby. Numbers on the map indicate latitude and longitude.

This new view shows that at least three of the south polar fractures are active along almost their full lengths - the fourth one, on the right, was only partially covered by this scan. The level of activity varies greatly along the fractures. The warmest parts of the fractures tend to lie on locations of the plume jets identified in earlier images. The main ‘tiger stripe’ fractures are not the only sources of heat, however; additional warm spots are seen in the upper right part of the scan. The warm regions are probably concentrated within less than a few hundred meters (a few hundred yards) of the fractures, and their apparent width in this image results from the relatively low resolution of the infrared data.

This map was made by scanning the south pole during the period from 16 to 37 minutes after closest approach to Enceladus, at a distance between 14 000 and 32 000 km as Cassini rapidly receded from its close, 50-km flyby.