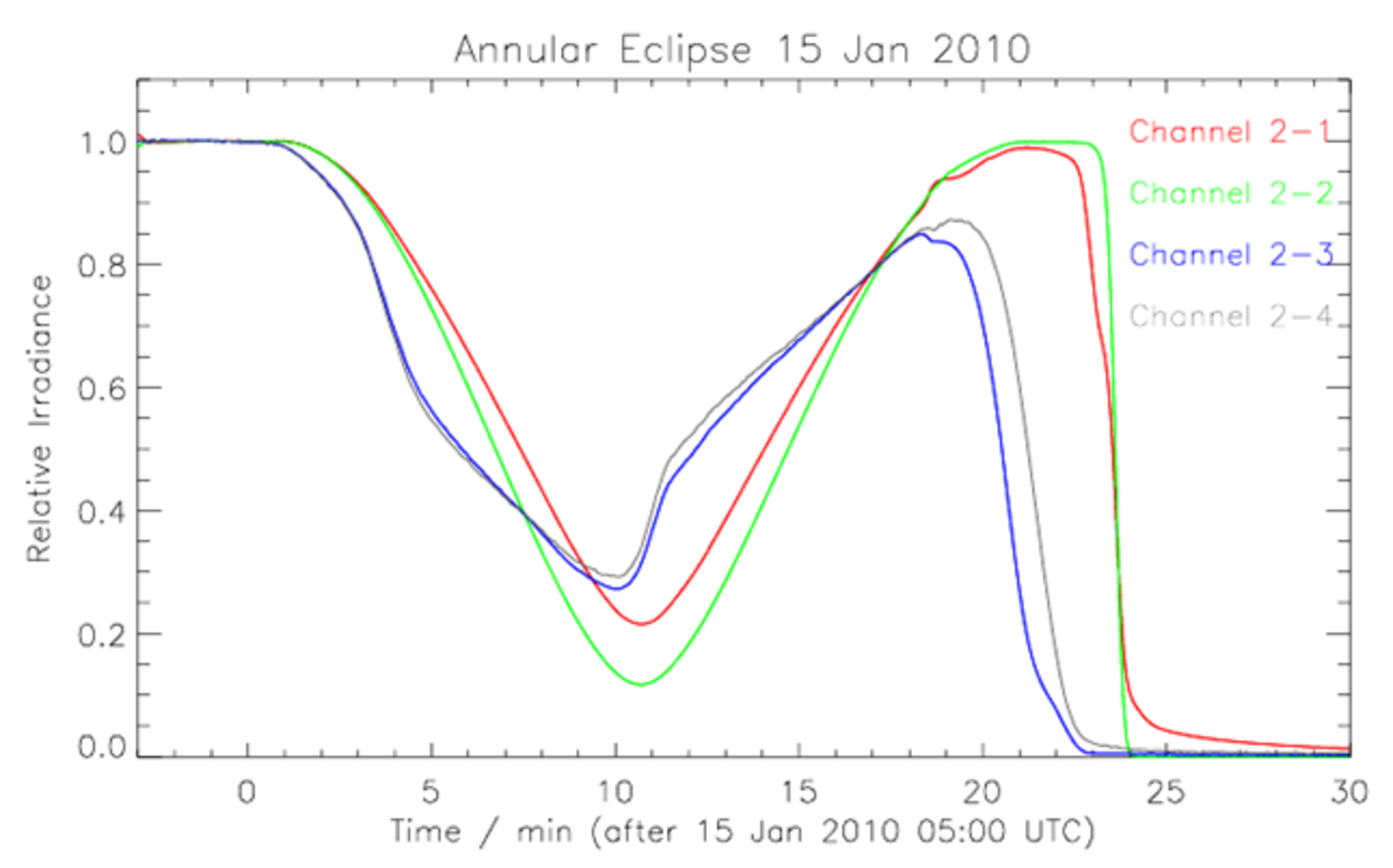 The same annular solar eclipse of 15 January 2010 observed by Proba-2's SWAP was also detected by the same satellite's LYRA (Lyman Alpha Radiometer) instrument, the first ultraviolet radiometer in space that employs diamond detectors. On 2 November 2009 Proba-2 was launched into a Sun-synchronous polar orbit, allowing quasi-permanent solar observation. Following LYRA’s ‘first light’ on 6 January 2010 the instrument has proven to be in good shape, going to measure its first solar flares with an unprecedented rapid time resolution of 0.5 sec. LYRA data will soon be feeding research investigations and space weather forecasts.

In the past, European scientists have built solar UV imagers, spectrometers, coronagraphs and total solar irradiance radiometers; but LYRA is their first solar UV radiometer. LYRA consists of four large pass band channels. Each channel observes the irradiance of the Sun behind a thin metallic foil or behind an interference filter. The detectors are either UV silicon diodes or diamond detectors, the latter having been specifically designed for LYRA. The combination of the spectral transmission of the filters and of the detector’s responsivity makes the twelve LYRA channels sensitive to different soft X-ray and UV pass bands. Their exact choice was made in relation to scientific questions in solar physics, aeronomy, and space weather.

In a strategy to maximize the accuracy of the measurements, LYRA comprises three similar independent units, consisting of four abovementioned channels each. Together with a set of two Light Emitting Diodes (LEDs) per channel and knowing that each unit degrades as a function of observing time, this configuration permits to prolong LYRA's calibration. Indeed, by infrequent use of two units, the more degraded response of the third unit can be corrected, and the evolution of the properties of the new diamond detectors and of the silicon detectors can be compared under real space conditions. The diamond detectors represent a novel UV technology that is hoped to replace silicon-based detectors. The former exhibit less dark current and should degrade more slowly under the harmful solar light measured by LYRA, as well as the harsh space environment (ionizing particles). It is already clear that the diamond detectors are much less sensitive to the protons of the South Atlantic Anomaly than Si detectors.
After tests in the dark in November and December 2009, the three LYRA doors were unlocked and opened on 5 and 6 January 2010. The PROBA2 spacecraft was not yet pointed to the Sun, but when it was in the evening of January 6, all twelve detectors measured signals. The fragile, thin metal filters have not shattered at launch nor developed pinholes. The detectors’ responsivity has not substantially changed substantially.

Weighing 3.53 kg and measuring 315 mm x 92.5 mm x 222 mm, LYRA’s development has been led by the Principal Investigator team at the Royal Observatory of Belgium in Brussels, in close collaboration with the Swiss Co-Investigator team at the PMOD/WRC in Davos. The project management was with the Centre Spatial de Liège and the German Co-Investigator at the Max-Planck-Institut für Sonnensystemforschung provided the radiometric calibration using the BESSY synchrotron at the Physikalisch-Technische Bundesanstalt in Berlin. Collaborators from Japan, France, the USA, and Russia are also acknowledged.