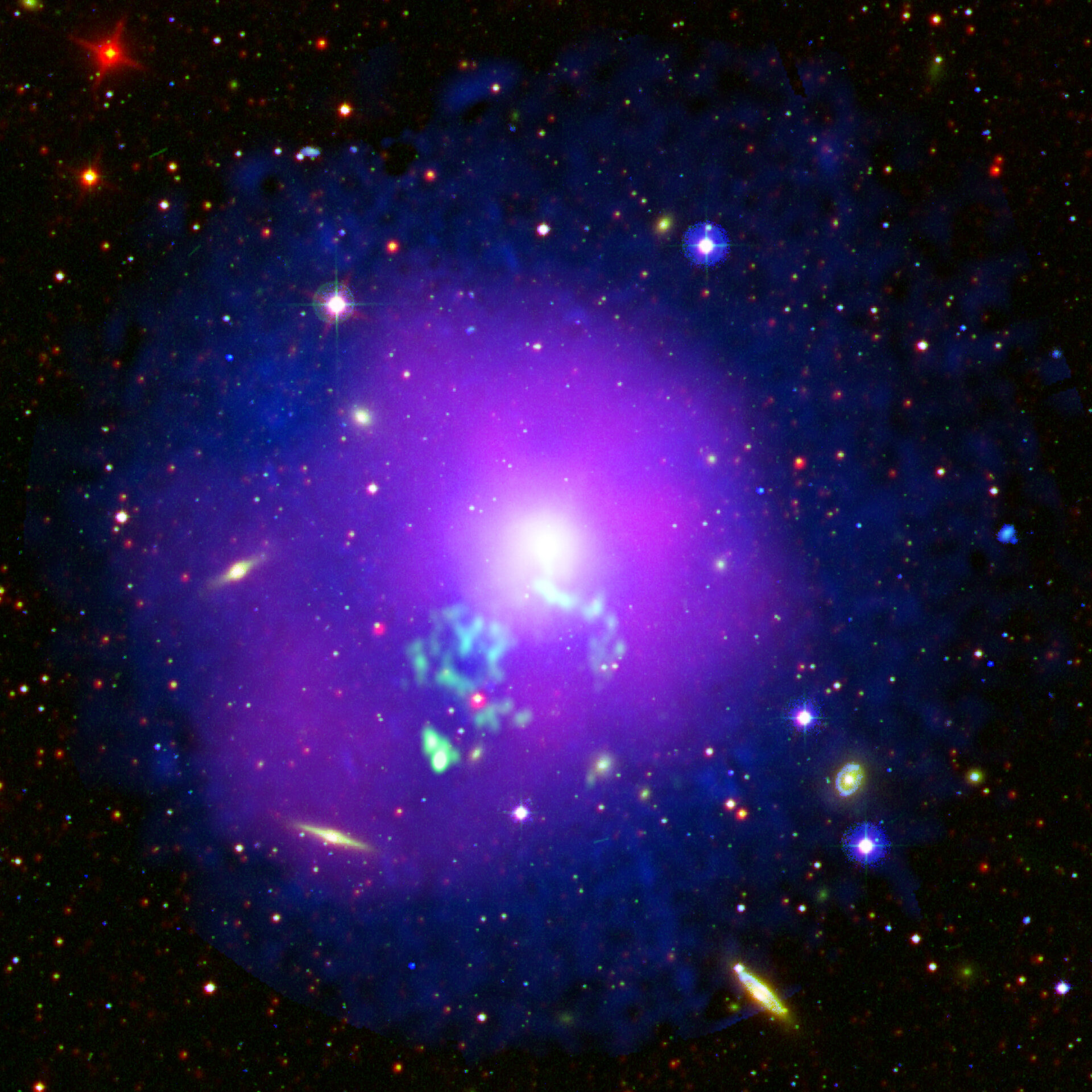 Galaxies are social beasts that are mostly found in groups or clusters – large assemblies of galaxies that are permeated by even larger amounts of diffuse gas. With temperatures of 10 million degrees or more, the gas in galaxy groups and clusters is hot enough to shine brightly in X-rays and be detected by ESA’s XMM-Newton X-ray observatory.

As galaxies speed through these gigantic cauldrons, they occasionally jumble the gas and forge it into lop-sided shapes. An example is revealed in this composite image of the galaxy group NGC 5044, the brightest group in X-rays in the entire sky.

The group is named after the massive and bright elliptical galaxy at its centre, surrounded by tens of smaller spiral and dwarf galaxies. The galaxies are shown in a combination of optical images from the Digitized Sky Survey with infrared and ultraviolet images from NASA’s WISE and Galex satellites, respectively. Foreground stars are also sprinkled across the image.

Embedded within the hot gas are clouds of even more energetic plasma that emit radio waves – a reminder of the past activity of a supermassive black hole lurking at the centre of the group. These are the green filament extending from the central galaxy to the lower right and the larger green region to its lower left, which were imaged with the Giant Metrewave Radio Telescope, near Pune in India.

The distribution of the intergalactic gas and its ingredients is asymmetric, with a larger splotch in the upper right part of the image and a smaller one in the lower left.

Astronomers believe that gas in NGC 5044 is sloshing as a consequence of a galaxy that passed through it several millions of years ago. The culprit is the spiral galaxy NGC 5054, which is not visible here, instead hiding beyond its lower left corner.

The transit of NGC 5054 through the centre of the group may have also caused the twisted shape of the radio-bright filament.

This image was first published in the XMM-Newton Image Gallery in October 2013. The analysis is reported in the paper by E. O’Sullivan et al. “The impact of sloshing on the intra-group medium and old radio lobe of NGC 5044.”