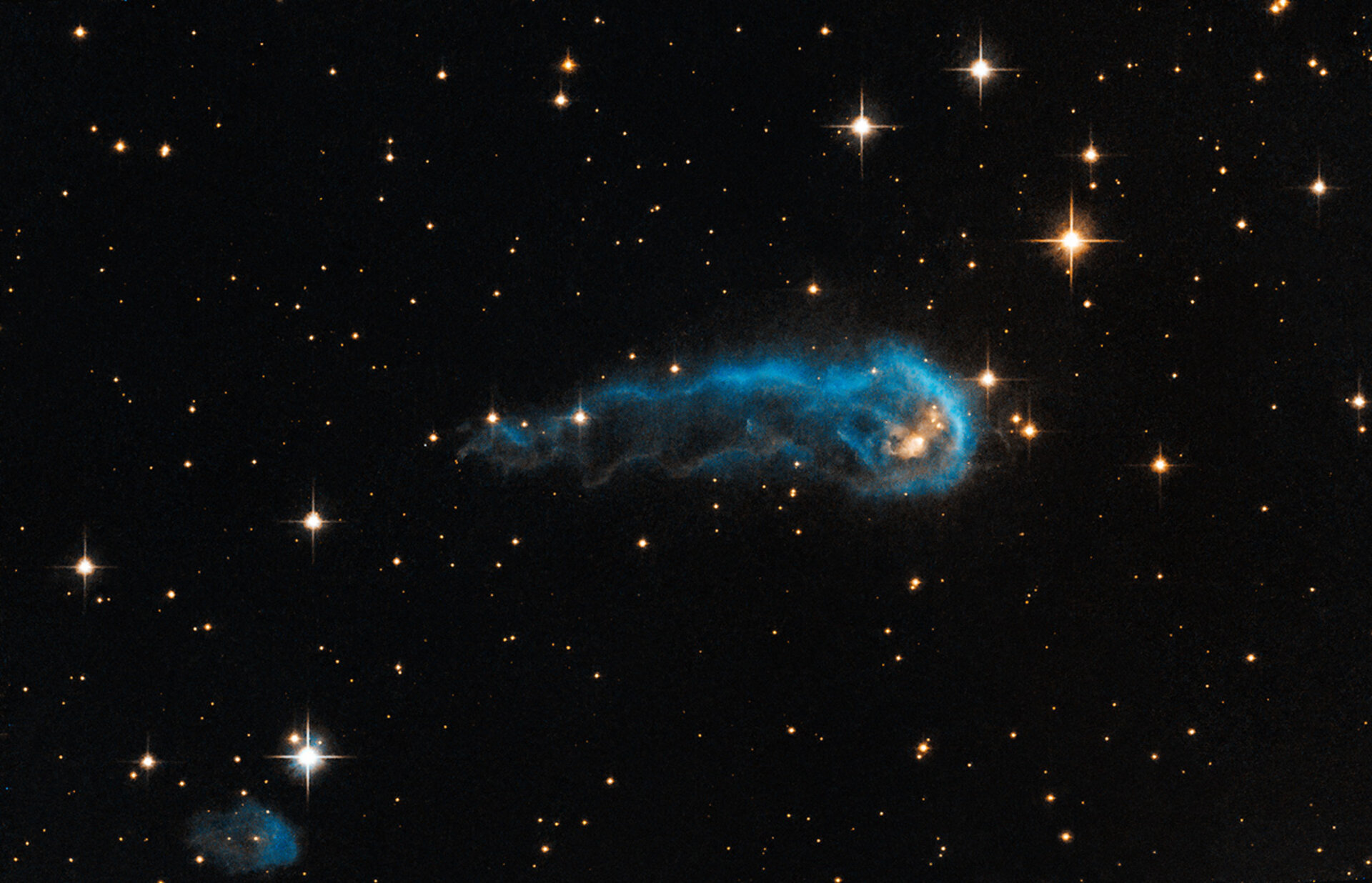 The Tadpole and the Wriggler

A bright blue tadpole appears to swim through the inky blackness of space. Known as IRAS 20324+4057 but dubbed “the Tadpole”, this clump of gas and dust has given birth to a bright protostar, one of the earliest steps in building a star.

There are actually multiple protostars within this tadpole’s ‘head’, but the glowing yellow one in this image is the most luminous and massive. When this protostar has gathered together enough mass from its surroundings, it will eventually emerge as a fully-fledged young star.

The intense blue glow is caused by nearby stars firing ultraviolet radiation at IRAS 20324+4057, which also sculpts its tail into a long, wiggly shape. In total, this clump spans roughly a light-year from head to tail-tip, and contains gas weighing almost four times the mass of the Sun.

Framed against a background of distant stars, IRAS 20324+4057 is making its way through the Cygnus OB2 association, a loose cluster of stars some 4700 light-years from Earth in the constellation of Cygnus. This association is one of the largest clusters known, and is famed for its heavyweight members. It contains some of the hottest, most massive and most luminous stars known, some of which are some two million times more luminous than the Sun.

The Tadpole is not alone in this interstellar pond. Just out of view to the bottom right of this image lies another curious object dubbed “the Goldfish” by astronomers. The Goldfish is about half the length of IRAS 20324+4057, and is also thought to be a globule of gas that is being both lit up and sculpted by radiation from cluster stars.

Completing this trio is a small clump of blue gas, informally nicknamed “the Wriggler” by some astronomers, visible in the bottom left of this Hubble image. All three objects have the same orientation in the sky and appear to be brighter on their northern sides, leading astronomers to believe they are being shaped by aggressive winds and radiation flowing from hot Cygnus OB2 stars towards the top right of the frame.

This image was originally released in August 2013 at the Hubble Heritage website.