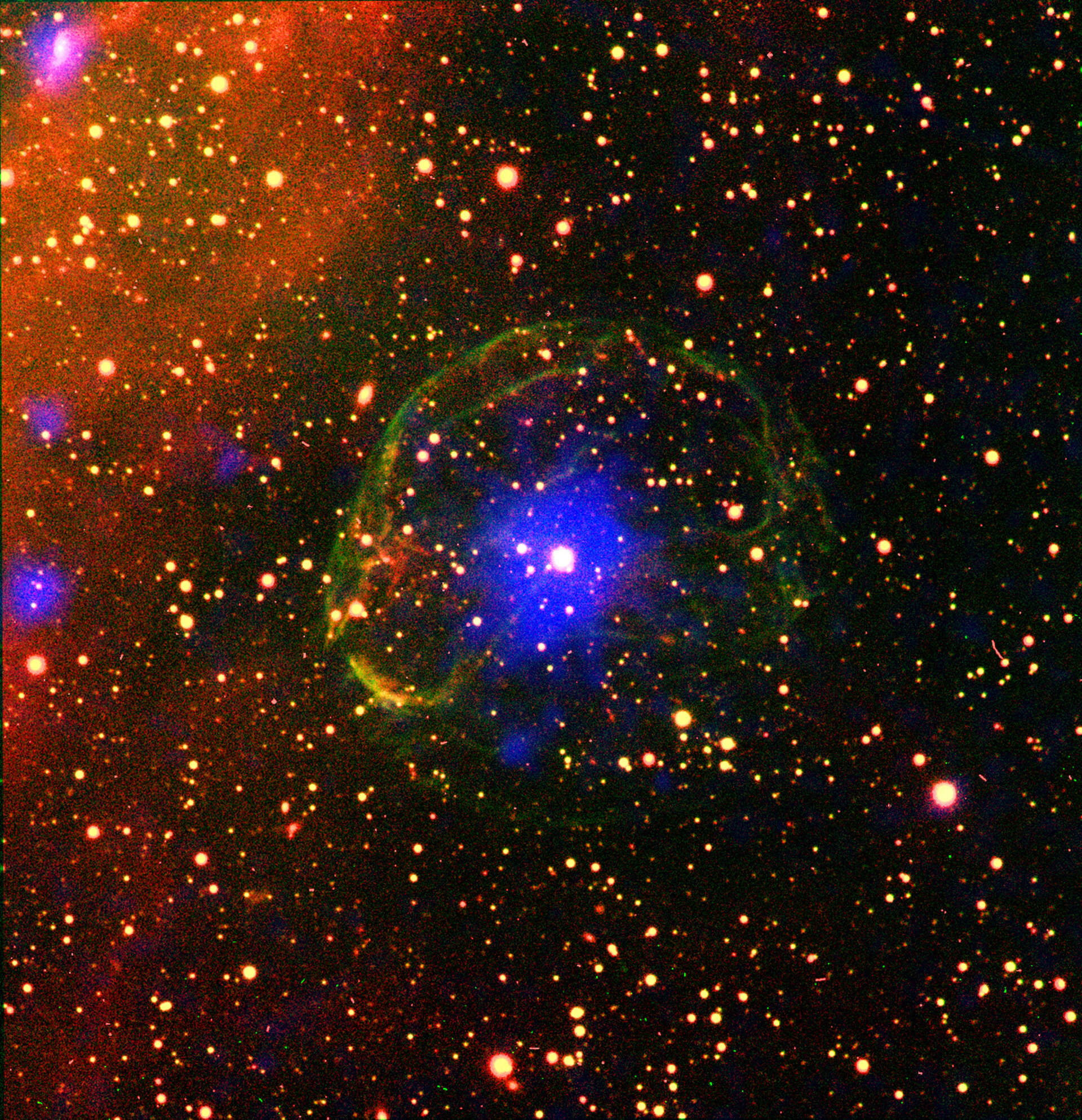 Massive stars end their lives with a bang: exploding as spectacular supernovas, they release huge amounts of mass and energy into space. These explosions sweep up any surrounding material, creating bubble remnants that expand into interstellar space. At the heart of bubbles like these are small, dense neutron stars or black holes, the remains of what once shone brightly as a star.

Since supernova-carved bubbles shine for only a few tens of thousands of years before dissolving, it is rare to come across neutron stars or black holes that are still enclosed within their expanding shell. This image captures such an unusual scene, featuring both a strongly magnetised, rotating neutron star – known as a pulsar – and its cosmic cloak, the remains of the explosion that generated it.

This pulsar, named SXP 1062, lies in the outskirts of the Small Magellanic Cloud, one of the satellite galaxies of our Milky Way galaxy. It is an object known as an X-ray pulsar: it hungrily gobbles up material from a nearby companion star and burps off X-rays as it does so. In the future, this scene may become even more dramatic, as SXP 1062 has a massive companion star that has not yet exploded as a supernova.

Most pulsars whirl around incredibly quickly, spinning many times per second. However, by exploring the expanding bubble around this pulsar and estimating its age, astronomers have noticed something intriguing: SXP 1062 seems to be rotating far too slowly for its age. It is actually one of the slowest pulsars known.

While the cause of this weird sluggishness is still a mystery, one explanation may be that the pulsar has an unusually strong magnetic field, which would slow the rotation.

The diffuse blue glow at the centre of the bubble in this image represents X-ray emission from both the pulsar and the hot gas that fills the expanding bubble. The other fuzzy blue objects visible in the background are extragalactic X-ray sources.

This image combines X-ray data from ESA’s XMM-Newton (shown in blue) with optical observations from the Cerro Tololo Inter-American Observatory in Chile. The optical data were obtained using two special filters that reveal the glow of oxygen (shown in green) and hydrogen (shown in red). The size of the image is equivalent to a distance of 457 light-years on a side.

This image was first published on ESA’s Science and Technology website in 2011. It is based on data from the paper “Discovery of a Be/X-ray pulsar binary and associated supernova remnant in the Wing of the Small Magellanic Cloud” by V. Hénault-Brunet, et al. 2012.