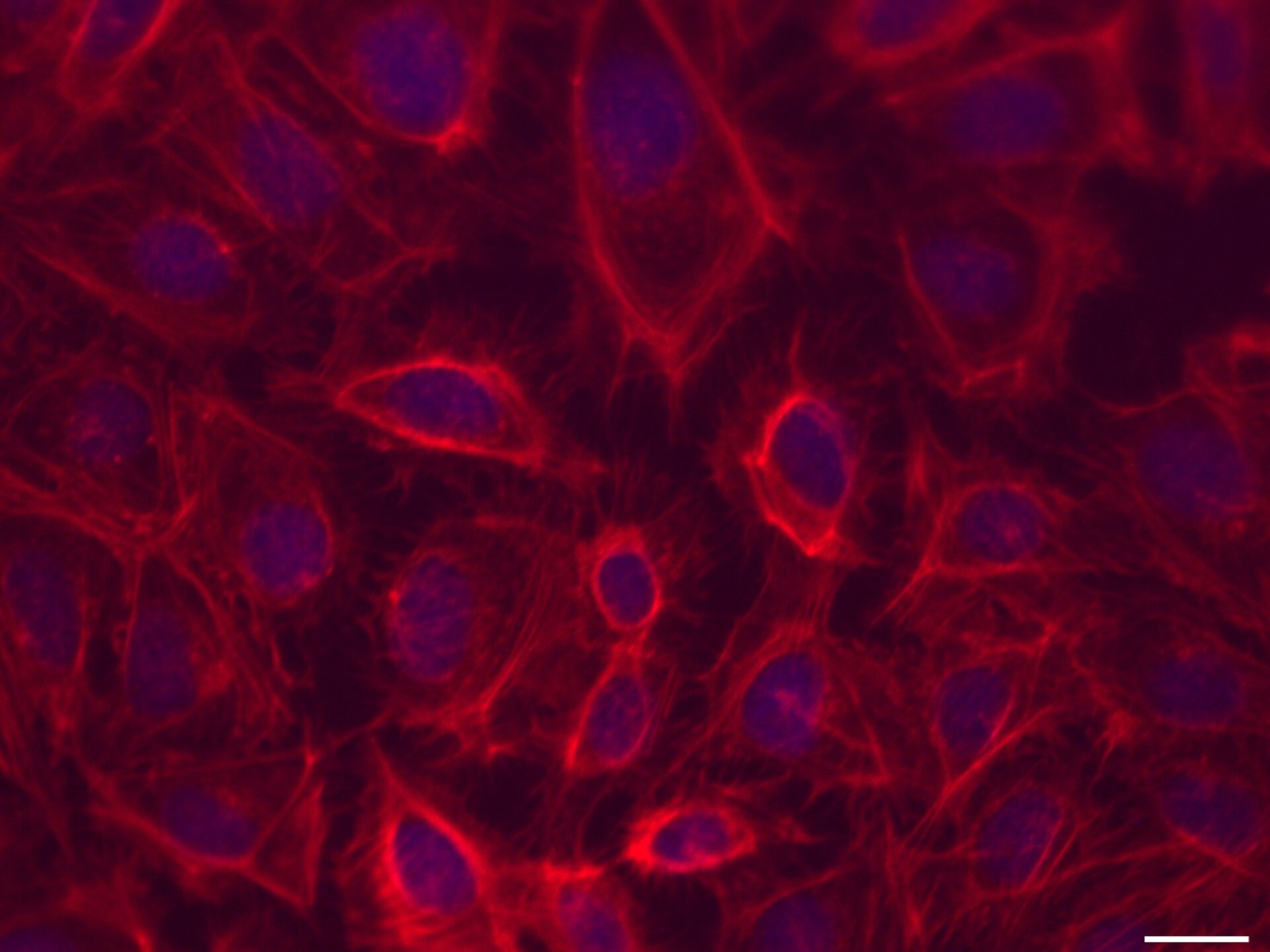 A fluorescent microscopic view of cells from a type of bone cancer, being studied for a future trip to deep space – aiming to sharpen our understanding of the hazardous radiation prevailing out there.

Today’s astronauts orbiting close to Earth are protected from most space radiation by our planet’s atmosphere and magnetic field.

In future, astronaut missions are planned to Mars and beyond. But heading farther out to space would increase crews’ radiation exposure, not just from the charged particles expelled by our own Sun but also the heavy ions thrown out by the rest of the cosmos, known as ‘galactic cosmic radiation’.

Concern is greatest around the 1% of cosmic radiation nuclei the size of an iron atom or more – known as ‘high-ionising high-energy particles’ or HZE for short.

Accelerated close to light speed by magnetic fields as they cross the Universe, HZEs can slice right through DNA. The most serious class of damage is termed ‘double-strand breaks’, leading to loss of genetic information and potentially triggering cancer

“However cells do have an ability to repair double-strand breaks, and this is what we want to study,” explains Yassen Abbas, a young graduate trainee at ESA’s Life, Physical Science and Life Support Laboratory.

“The aim is to follow the repair process in real time; the cells we are using have a marker which will express a dedicated fluorescent fusion protein, allowing us to monitor the formation of DNA repair.”

The test subjects are osteosarcoma cells – a type of bone cancer – that have been selected because of their rapid growth characteristics. “The more cells per sample, the higher the chance of observing a radiation event,” adds Yassen.

The proposed experiment would include a camera to trace the progress of the repair process, returning images to the ground in real time.

But this isn’t an experiment that can be done on the International Space Station, or anywhere else in low-Earth orbit. Instead the proposed payload will have to be placed in deep space, while also keeping the cell samples alive and comfortable.

Yassen has been working on the practicalities of achieving this on a fully automated basis.

He adds: “At one time we were planning to fly as a passenger on ESA’s now-cancelled Lunar Lander. As an alternative, missions to other deep-space destinations could be considered, or else a dedicated CubeSat.”

The image has been fluorescently stained to visualise the cells’ nuclei in blue and their surrounding cytoskeleton in red. The image covers a length of approximately 305 micrometres (equivalent to 0.305 millimetres) The scale bar measures 25 micrometres across.