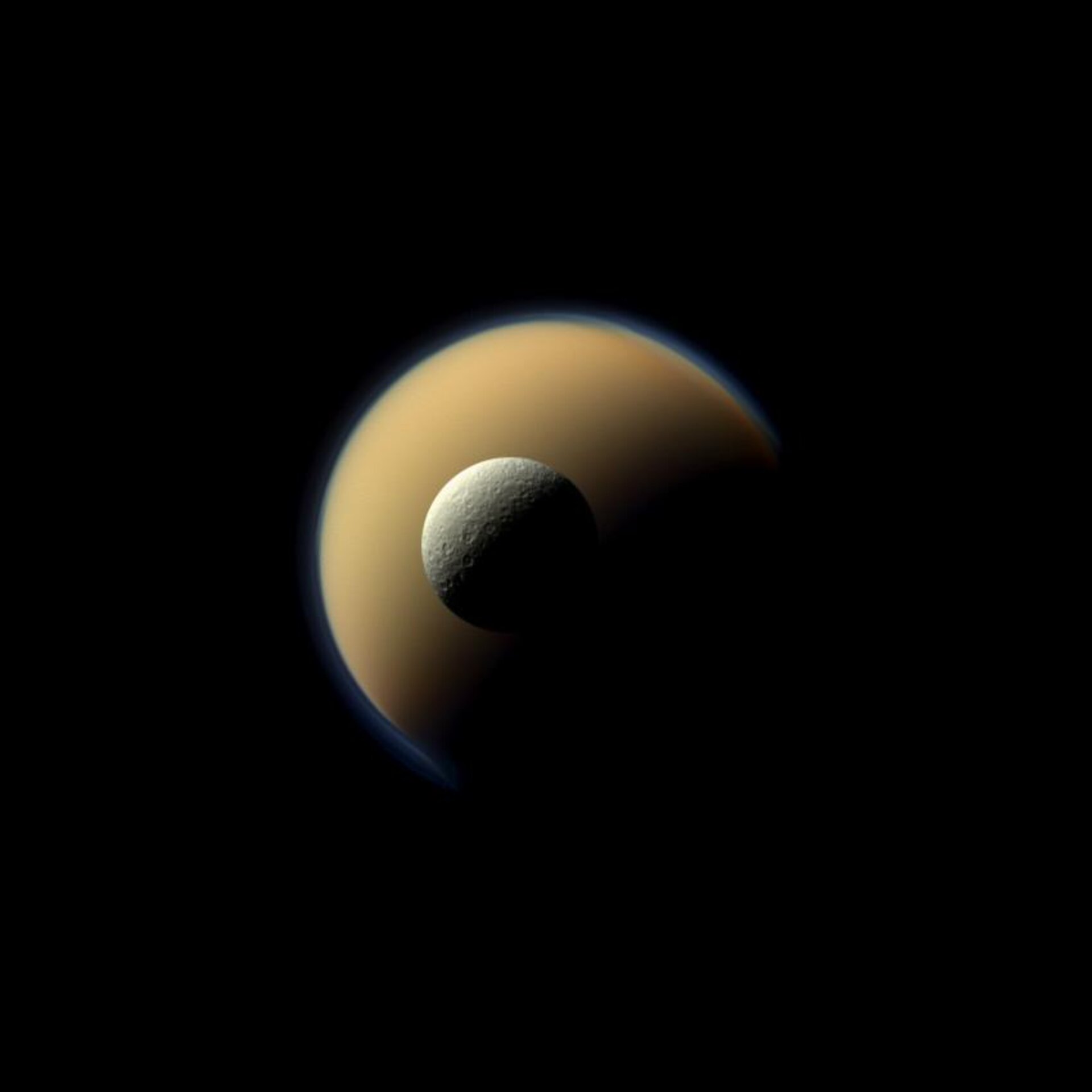 Earth is the only planet in our Solar System to have a single solitary moon. While others, such as Mercury and Venus, have none, the gas giants have accumulated crowds of orbiting bodies — Saturn, for example, boasts an impressive 62 moons!

This image, taken by the Cassini orbiter, shows its two biggest: Rhea and its larger companion Titan. Titan’s diameter, at 5150 km, is 50% larger than that of our Moon, while Rhea is somewhat smaller at 1528 km across.

Although Rhea’s pitted and cratered appearance contrasts sharply with the faint golden glow of Titan, the moons are quite similar in composition, containing a mixture of rock and water ice. Rhea is thought to comprise three quarters ice and one quarter rock. Observations with Cassini have determined that Rhea does not contain a distinct rocky core – instead, it is made up of rock and ice mixed together, giving it its ‘dirty snowball’ appearance.

Titan’s orange hue is a result of its atmosphere. It is the only body in the Solar System other than Earth to have a thick, nitrogen-rich atmosphere, which in Titan’s case also contains substances like methane, hydrogen and hydrocarbons. These molecules form via reactions with sunlight high up in Titan’s atmosphere, eventually settling to lower altitudes to form an orange-hued smog.

In some images Titan’s upper atmosphere takes on a layered appearance, with ‘stripes’ of haze stacked on top of one another in an onion-like fashion. This Cassini image shows one such layer — a hazy band of blue encircling Titan. This haze runs all the way around the moon, and brightens in two crescent-shaped areas over the polar regions to form ‘polar hoods’. These hoods are swirling, high-altitude areas of denser gas. Titan’s north polar hood can be seen towards the upper right of the image, and its corresponding southern hood lies towards the lower left of the moon.

These polar hoods are seasonal, growing and dissipating with the changing seasons. Seasons on Saturn and its accompanying moons last for around seven years. When Cassini arrived in the Saturn system in 2004 Titan already had a thick hood above its north pole, which was experiencing winter.

After the Saturnian equinox in August 2009, Titan’s northern hemisphere began moving into spring, and its southern latitudes headed into autumn. Accompanying this seasonal shift was the appearance of a polar vortex above Titan’s south pole. In 2012 Cassini snapped multiple images of this vortex as it swirled round furiously, completing a full rotation in just nine hours.

While the Cassini mission has spent much time studying Titan, it has also performed numerous flybys of Rhea, passing close to the moon four times to probe its interior structure, gravitational pull and surface characteristics.

These encounters showed Rhea to be an ancient and heavily cratered body, bearing numerous pocks and scars from past impacts. This is something that astronomers want to explore by studying Rhea; measuring the dusty debris flying up from Rhea’s surface may help us to understand more about the rate of meteoroid bombardments and amount of cosmic debris raining down on the Saturnian system.

This true-colour image is made with exposures taken on 16 June 2011 using red, green and blue filters on Cassini’s narrow-angle camera.

The Cassini–Huygens mission is a cooperative project between NASA, ESA and Italy’s ASI space agency.

This image was originally released in December 2013 on the NASA JPL website.