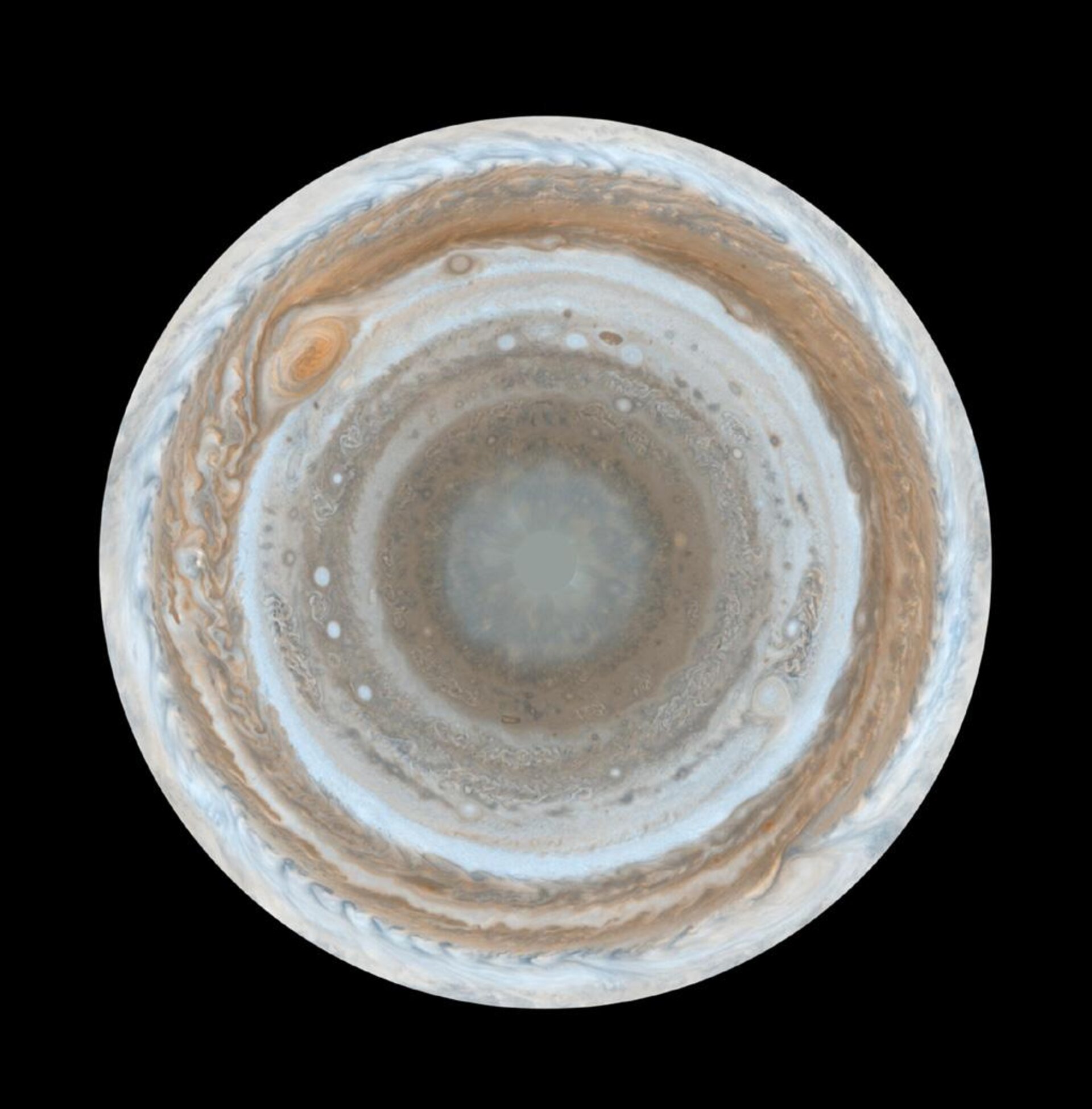 This Cassini image shows Jupiter from an unusual perspective. If you were to float just beneath the giant planet and look directly up, you would be greeted with this striking sight: red, bronze and white bands encircling a hazy south pole. The multicoloured concentric layers are broken in places by prominent weather systems such as Jupiter’s famous Great Red Spot, visible towards the upper left, chaotic patches of cloud and pale white dots. Many of these lighter patches contain lightning-filled thunderstorms.

Jupiter has very dramatic weather – the planet’s axis is not as tilted (towards or away from the Sun) as much as Earth’s so it does not have significant seasonal changes, but it does have a thick and tumultuous atmosphere filled with raging storms and chaotic cloud systems.

These clouds, formed from dense layers of ammonia crystals, are tugged, stretched and tangled together by Jupiter’s turbulence and strong winds, creating vortices and hurricane-like storms with wind speeds of up to 360 km per hour.

The Great Red Spot is actually an anticyclone that has been violently churning for hundreds of years. It was at one stage large enough to contain several Earth-sized planets but recent images from the Hubble Space Telescope show it to be shrinking. There are other similarly striking storms raging in both Jupiter’s cool upper atmosphere and hotter lower layers, including a Great Dark Spot and Oval BA, more affectionately nicknamed Red Spot Jr.

Jupiter’s south pole is at the very centre of this image, visible as a murky grey-toned circle. This patch is not as detailed as the rest of the planet because Cassini had to peer through a lot more atmospheric haze in the polar region, making it harder to see.

This polar map is composed of 18 colour images taken by the narrow-angle camera on NASA’s Cassini spacecraft during a flyby on 11–12 December 2000. This map is incredibly detailed; the smallest visible features in this image are about 120 km across. There is also an accompanying map of the planet’s north pole. In 2016, NASA’s Juno spacecraft will arrive at Jupiter and start to beam back images of the planet’s poles.

The Cassini–Huygens mission, launched in 1997 as a joint endeavour of ESA, NASA and Italy’s ASI space agency, flew past Venus, Earth and Jupiter en route to observe Saturn, its moons and rings. Observations with Cassini have given us an unprecedented understanding of the Saturnian system. ESA’s Juice mission aims to do the same for Jupiter. Planned for launch in 2022, the spacecraft will reach Jupiter in 2030 and begin observing the planet and three of its moons – Ganymede, Callisto and Europa. Previous flybys of these moons have raised the exciting prospect that some of them might harbour subsurface liquid oceans and conditions suitable to support some forms of life.

Juice was recently given the green light to continue to the next stage of development.