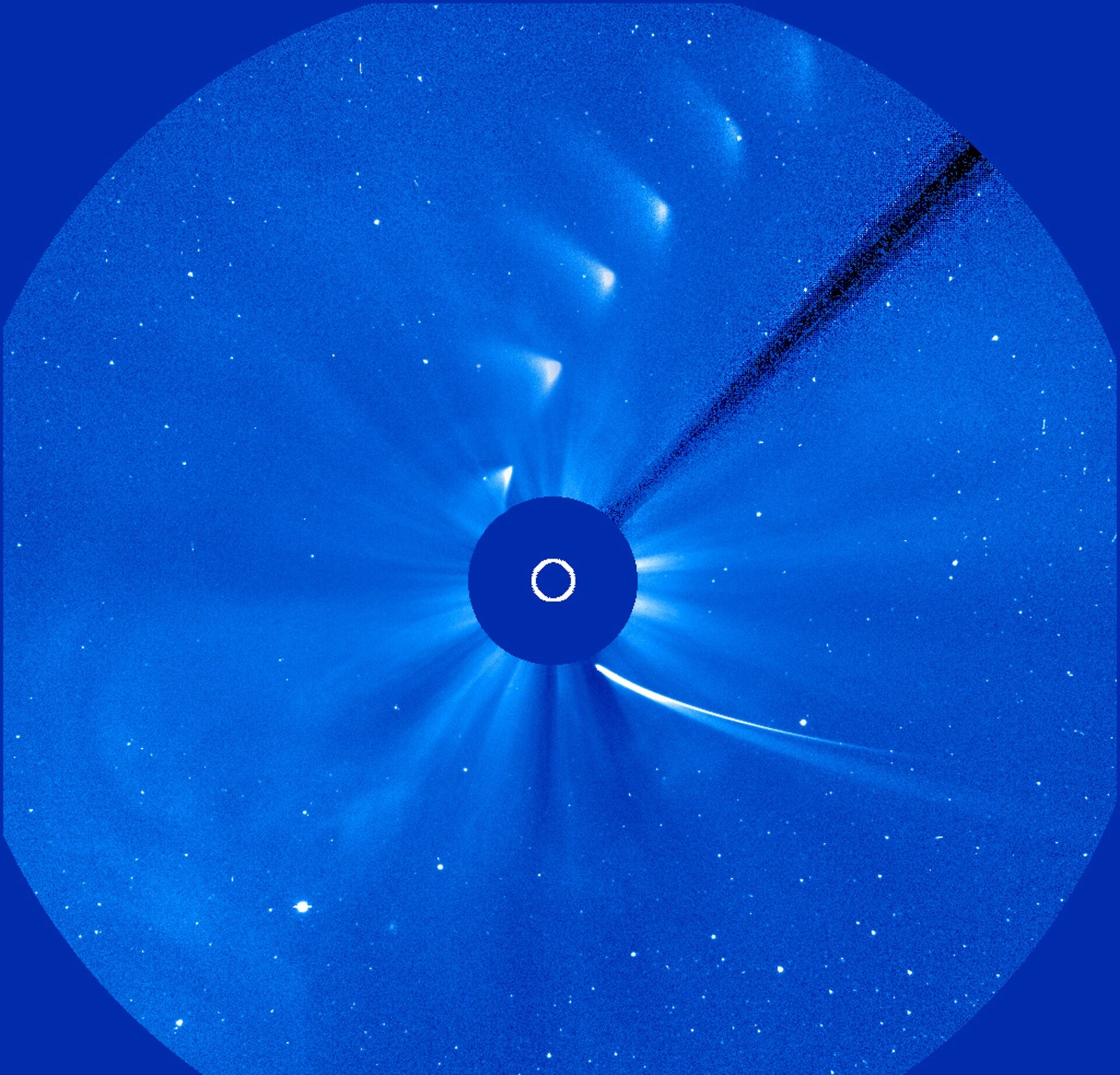 Some had hoped comet ISON would be the comet of the century, lighting Earth’s skies during the latter months of 2013. Instead, it was barely visible for ground-based observers, but the Solar and Heliospheric Observatory (SOHO) had a ring-side seat to watch its disintegration.

This image is a montage spanning three days from 28–30 November 2013. The comet enters the image at the lower right, passes round the Sun and exits the frame towards the upper right. The bright star to the lower left is the red supergiant star Antares.

Astronomers had been tracking the comet for more than a year as it edged closer to the Sun, and by late November it had passed into the field of view of SOHO’s LASCO C3 camera. It was to skim the Sun, just 1 165 000 km above the fiery surface.

This is approximately 50 times closer to the Sun than innermost planet Mercury, and the comet was officially termed a ‘sungrazer’. If it survived the encounter it was expected to become extremely bright and be a well-placed object, visible to the naked eye in Earth’s night sky.

Calculations based on its orbit show that ISON began its journey towards the Sun about 3 million years ago, dislodged from its distant orbit by a passing star. Now, its fate would be sealed within days.

On 27 November, the comet brightened dramatically by a factor of about ten. Yet just before it reached closest approach to the Sun, it began to fade. This was a strong indicator that the heart of the comet, the icy nucleus, had broken up. Many expected it would disperse completely but, at first, it looked as if they were wrong.

Comet ISON appeared to survive the close approach, emerging on the other side of the Sun. Some still hoped for a bright display in the night skies. But they were to be disappointed. Quickly, the comet began to disappear. A recent analysis of SOHO data showed that the nucleus had indeed disintegrated just before closest approach to the Sun. Nothing appreciable was left of it, just a lot of dust and vapour.

The disintegration of comet ISON provided scientists with an exceptional chance to see a comet inside and out.  Another rare opportunity is being provided by comet 67P/Churyumov-Gerasimenko. ESA’s Rosetta spacecraft caught up with this comet early in August 2014 and deployed the lander Philae to the surface in November. The orbiter will accompany comet 67P/C-G along its orbit and through its closest approach to the Sun, which takes it between the orbits of Mars and Earth. While this comet is unlikely to suffer the same fate as comet ISON, it will provide an unsurpassed insight into the nature of comets.