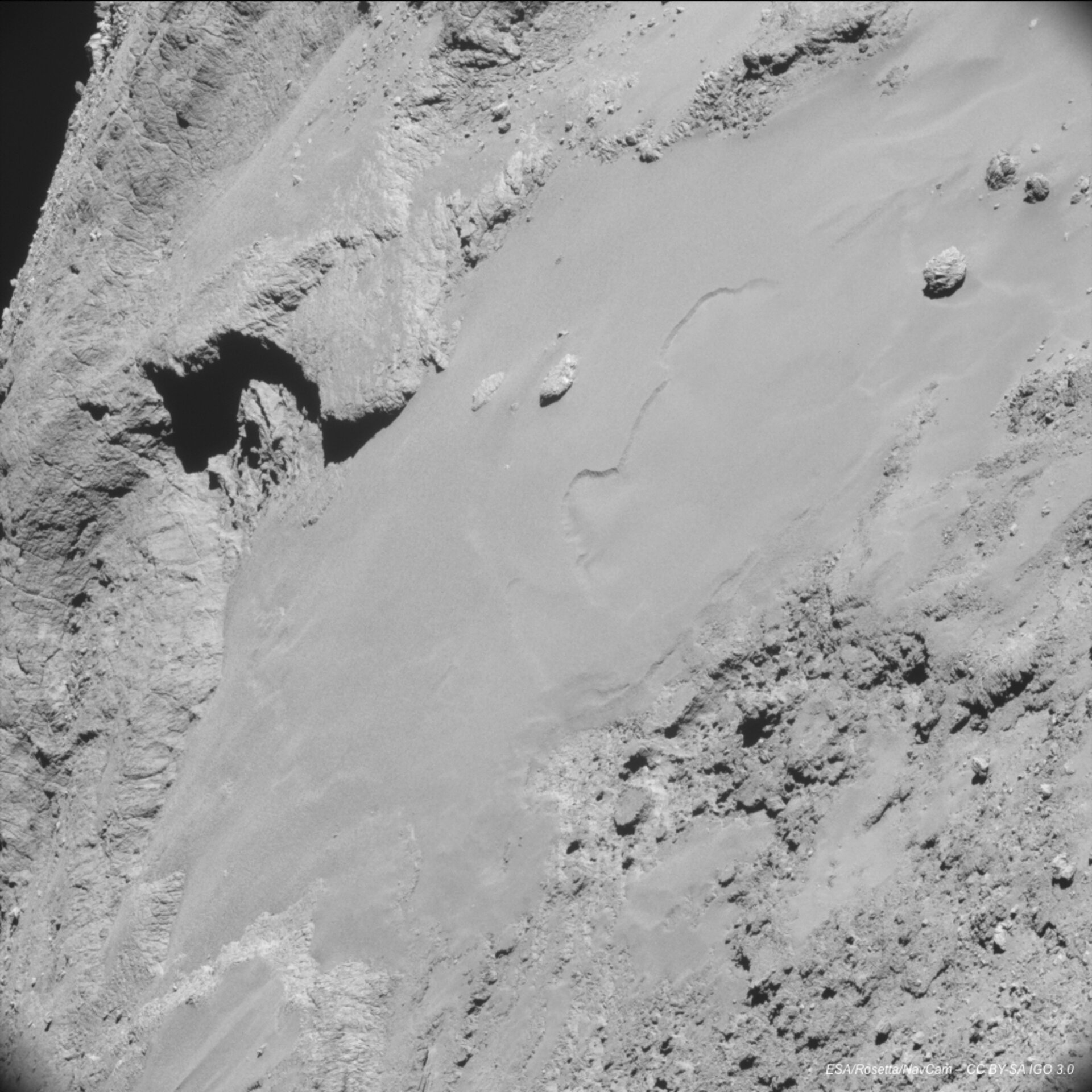 On 14 February 2015, Rosetta swooped over the surface of Comet 67P/Churyumov–Gerasimenko at a distance of just 6 km. The closest approach took place at 12:41 GMT over a region known as Imhotep, which is on the larger of the comet’s two lobes.

The image reveals the contrasting terrains seen on this comet. Layered and fractured exposed surfaces contrast against expanses of smooth, dust-covered terrain. In some places, such as to the lower right of this image, the faint outline of raised near-circular objects with smooth surfaces can be seen. Elsewhere, boulders ranging in size from a few metres to a few tens of metres are scattered across the surface. The largest boulder, seen to the upper right, is named Cheops.

As well as providing the opportunity to take close-up high-resolution images of the surface, flybys like this also allow Rosetta’s instruments to sample the innermost parts of the comet’s atmosphere, or coma, to understand the connection between the source of the observed activity and the wider coma.

The spacecraft has now begun a new phase of observations, whereby it will continue to fly past at a range of distances, typically between about 15 km and 100 km.

The more distant flybys will provide the broader context of a wide-angle view of the nucleus and its growing coma as the comet moves towards perihelion – the closest approach to the Sun along its orbit. Rosetta is today 345 million kilometres from the Sun; at perihelion, on 13 August this year, it will be at about 186 million kilometres, between the orbits of Earth and Mars.

The image presented here was taken with the navigation camera shortly after closest approach, at 14:19 GMT, from a distance of 8.7 km. It has a scale of 0.74 m/pixel and measures 0.76 km across.

More images from the flyby are available via the blog: CometWatch 14 February – flyby special

This work is licenced under the Creative Commons Attribution-ShareAlike 3.0 IGO (CC BY-SA 3.0 IGO) licence. The user is allowed to reproduce, distribute, adapt, translate and publicly perform this publication, without explicit permission, provided that the content is accompanied by an acknowledgement that the source is credited as 'European Space Agency – ESA', a direct link to the licence text is provided and that it is clearly indicated if changes were made to the original content. Adaptation/translation/derivatives must be distributed under the same licence terms as this publication. To view a copy of this license, please visit http://creativecommons.org/licenses/by-sa/3.0/igo/