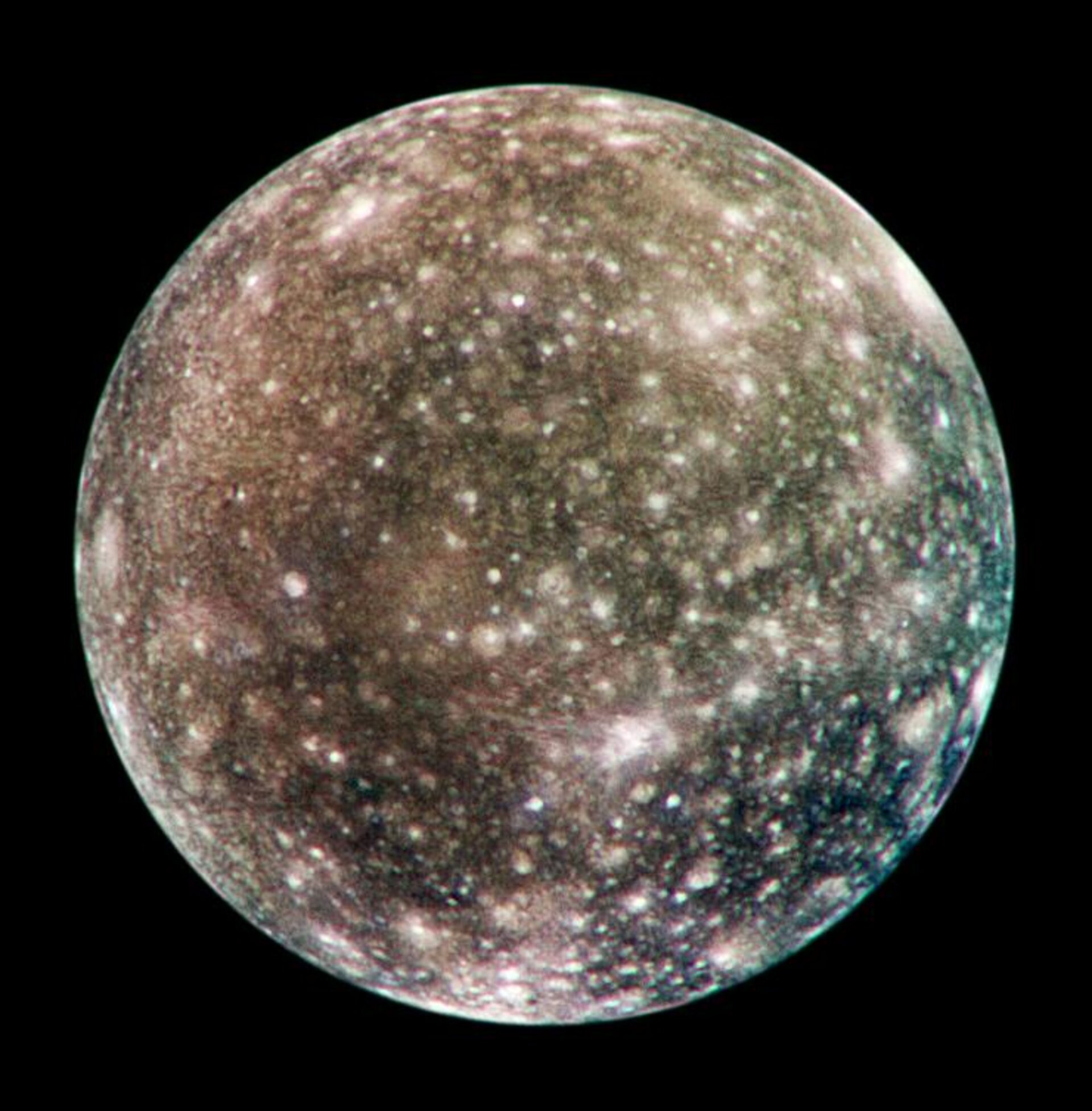 The speckled object depicted here is Callisto, Jupiter’s second largest moon. This image was taken in May 2001 by NASA’s Galileo spacecraft, which studied Jupiter and its moons from 1995 until 2003.

Similar in appearance to a golf ball, Callisto is covered almost uniformly with pockmarks and craters across its surface, evidence of relentless collisions. In fact, Callisto is the most heavily cratered object in the Solar System. The moon is made up of equal parts of rock and ice – the brighter parts of Callisto’s surface are thought to be mainly water ice, whereas the darker patches are regions of highly eroded and ice-poor rocky material.

Callisto is roughly the same size as the planet Mercury, but only about a third of the mass. It is the outermost of Jupiter’s four large Galilean satellites, a group consisting of Io, Europa, Ganymede and Callisto. It orbits relatively far away from Jupiter compared to these other satellites: it lies 1 880 000 km from the planet, roughly 26 times the radius of the planet itself. While this in itself is not unusual – our Moon orbits at some 60 times Earth’s radius – the important thing is Callisto’s isolation from its neighbouring moons. Callisto’s closest neighbour is Ganymede, which orbits 800 000 km closer to Jupiter.

This isolation means that Callisto does not experience any significant tidal forces from Jupiter that would tear at its structure. It also does not show any signs of geological processes such as volcanism or plate tectonics, which we clearly see on moons that are involved in violent cosmic tugs-of-war with Jupiter, such as Io, Europa and Ganymede. Callisto remains relatively intact and is a witness of the early Solar System: its surface is the oldest terrain, at a truly ancient four billion years.

This image is the only complete full-colour view of Callisto obtained by Galileo. The spacecraft provided us with a great deal of information about the jovian system: as well as sending the first probe into the atmosphere of Jupiter, and measuring Jupiter’s composition and dynamics, it observed Io’s volcanism, sent back data supporting the idea of a liquid ocean on Europa, and probed the properties of Ganymede and the subject of this image, Callisto. It also managed to observe the famous Comet Shoemaker–Levy 9 colliding with Jupiter in 1994.

The jovian system will be visited again in the not-too-distant future. In 2016, NASA’s Juno spacecraft will arrive at Jupiter and start to beam back images of the planet’s poles. Later, ESA’s Juice, short for JUpiter ICy moons Explorer, planned for launch in 2022, will tour the system with the aim of making a breakthrough in our knowledge of the giant gaseous planet and its environs, especially the intriguing moons Ganymede, Europa and Callisto.