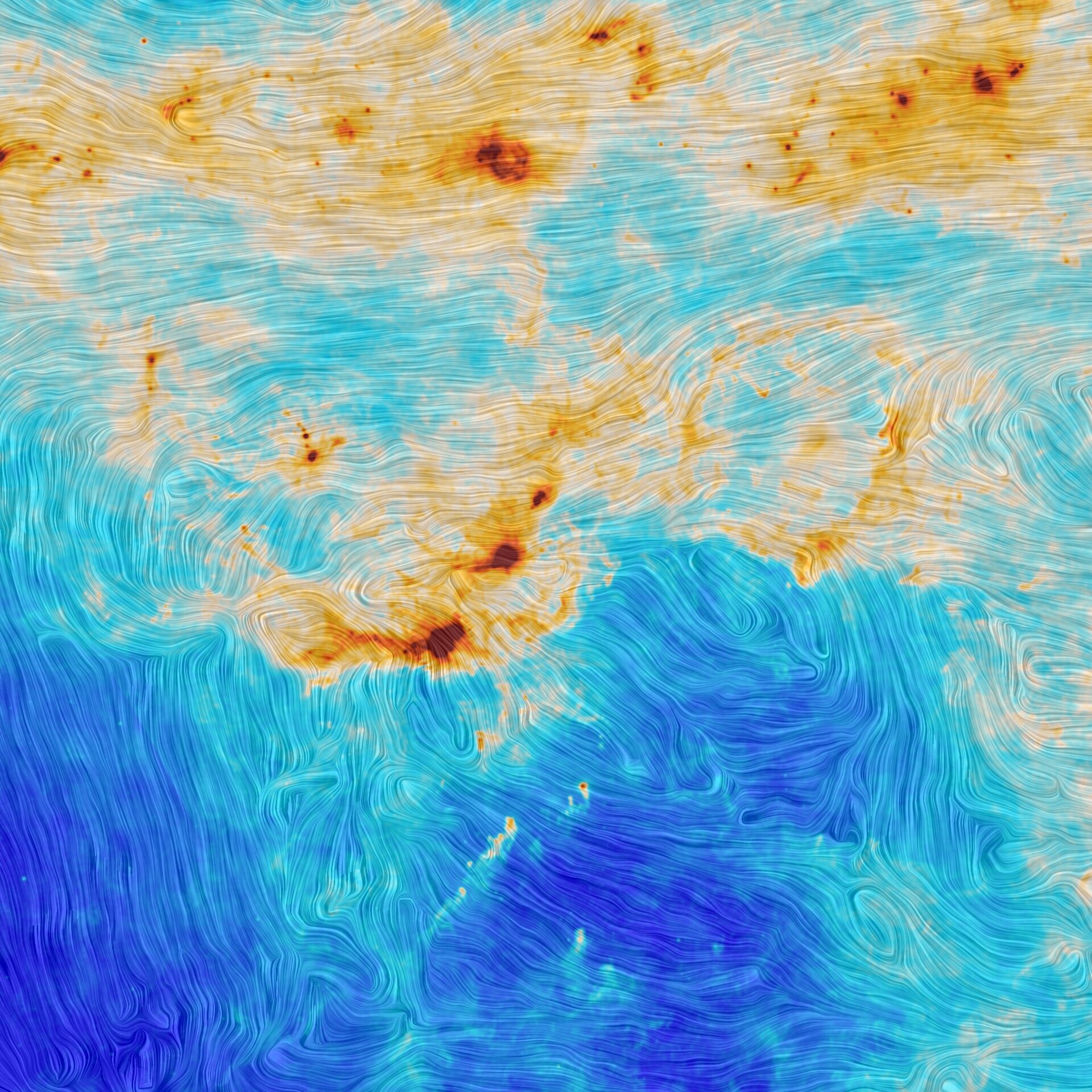 Star formation and magnetic turbulence in the Orion Molecular Cloud

With blue hues suggestive of marine paradises and a texture evoking the tranquil flow of sea waves, this image might make us daydream of sandy beaches and exotic holiday destinations. Instead, the subject of the scene is intense and powerful, because it depicts the formation of stars in the turbulent billows of gas and dust of the Orion Molecular Cloud.

The image is based on data from ESA’s Planck satellite, which scanned the sky between 2009 and 2013 to study the cosmic microwave background, the most ancient light in the Universe’s history. While doing so, Planck also detected foreground emission from material in the Milky Way, as well as from other galaxies.

Our Galaxy is pervaded by a diffuse mixture of gas and dust that occasionally becomes denser, creating giant gas clouds where stars can form. While present only in traces, dust is a crucial ingredient in these interstellar clouds. It also shines brightly at some of the wavelengths that were probed by Planck, so astronomers can use these data to learn more about the cradles of star formation.

In addition, dust grains have elongated shapes and tend to align their longest axis at right angles to the direction of the Galaxy’s magnetic field. This makes their emission partly ‘polarised’ – it vibrates in a preferred direction. Since Planck was equipped with polarisation-sensitive detectors, its scans also contain information about the direction of the magnetic field threading the Milky Way.

This image combines a visualisation of the total intensity of dust emission, shown in the colour scale, with an indication of the magnetic field’s orientation, represented by the texture. Blue hues correspond to regions with little dust, while the yellow and red areas reflect denser (and mostly hotter) clouds containing larger amounts of dust, as well as gas.

The red clumps at the centre of the image are part of the Orion Molecular Cloud Complex, one of the closest large regions of star formation, only about 1300 light-years from the Sun. The most prominent of the red clumps, to the lower left of centre, is the famous Orion Nebula, also known as M42. This is visible to the naked eye in the constellation Orion, just below the three stars forming the ‘belt’ of the mythological hunter. An annotated version of the image can be found here.

The magnetic field appears regular and organised in almost parallel lines in the upper part of the image: this is a result of the large-scale arrangement of the magnetic field along the Galactic plane, which is located above the top of this image. However, the field becomes less regular in the central and lower parts of the image, in the region of the Orion Molecular Cloud. Astronomers believe that the turbulent structure of the magnetic field observed in this and other star-forming clouds is related to the powerful processes taking place when stars are being born.

The emission from dust is computed from a combination of Planck observations at 353, 545 and 857 GHz, whereas the direction of the magnetic field is based on Planck polarisation data at 353 GHz. The image spans about 40º across.