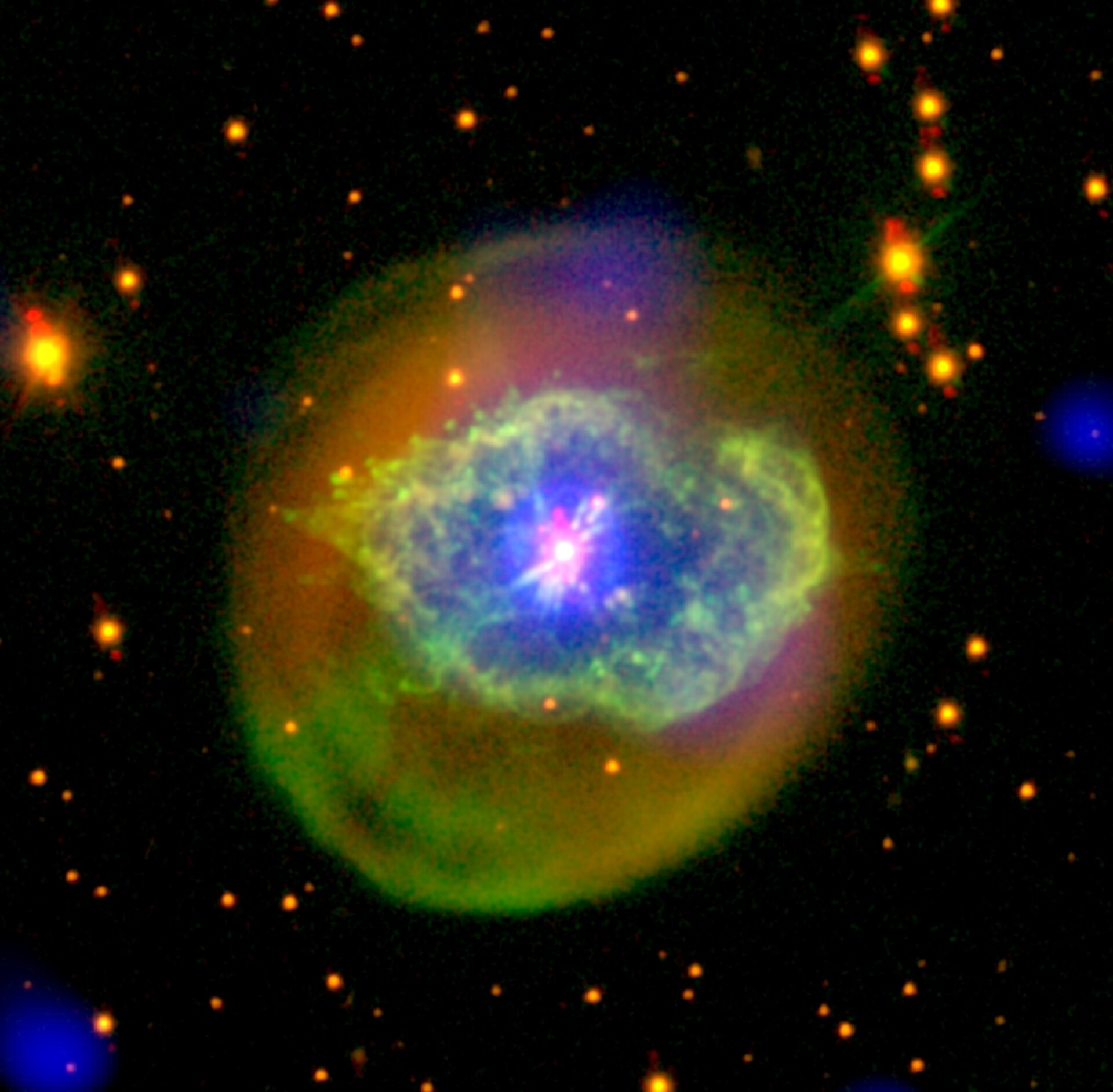 Beneath the vivid hues of this eye-shaped cloud, named Abell 78, a tale of stellar life and death is unfolding. At the centre of the nebula, a dying star – not unlike our Sun – which shed its outer layers on its way to oblivion has, for a brief period of time, come back to echo its past glory.

Releasing their outer shells is the usual fate for any star with a mass of 0.8–8 times that of the Sun. Having exhausted the nuclear fuel in their cores after burning for billions of years, these stars collapse to become dense, hot white dwarf stars. Around them, the ejected material strikes the ambient gas and dust, creating beautiful clouds known as ‘planetary nebulas’. This curious name was adopted by 18th-century astronomers who discovered these ‘puffing’ stars and thought their round shape similar to that of planets.

However, the resurgence to life seen in this image is an exceptional event for a planetary nebula. Only a handful of such born-again stars have been discovered, and here the intricate shape of the cloud’s glowing material gives away its turbulent history.

Although nuclear burning of hydrogen and helium had ceased in the core of the dying star, causing it to collapse under its own weight and its envelope to expand into a bubble, some of the star’s outer layers became so dense that fusion of helium resumed there.

The renewed nuclear activity triggered another, much faster wind, blowing more material away. The interplay between old and new outflows has shaped the cloud’s complex structure, including the radial filaments that can be seen streaming from the collapsing star at the centre.

The interaction between slow and fast winds gusting in the environment of Abell 78 heated the gas to over a million degrees, making it shine brightly in X-rays. Astronomers detected this hot gas with ESA’s XMM-Newton space observatory, revealing striking similarities with another born-again planetary nebula, Abell 30.

This three-colour image combines X-ray data collected in 2013 by XMM-Newton (blue) with optical observations obtained using two special filters that reveal the glow of oxygen (green) and helium (red). The optical data were gathered in 2014 with the Andalusian Faint Object Spectrograph and Camera at the Nordic Optical Telescope on La Palma, in the Canary Islands. A study of the X-ray emission from Abell 78 is presented in a paper by J.A. Toalá et al. 2015.