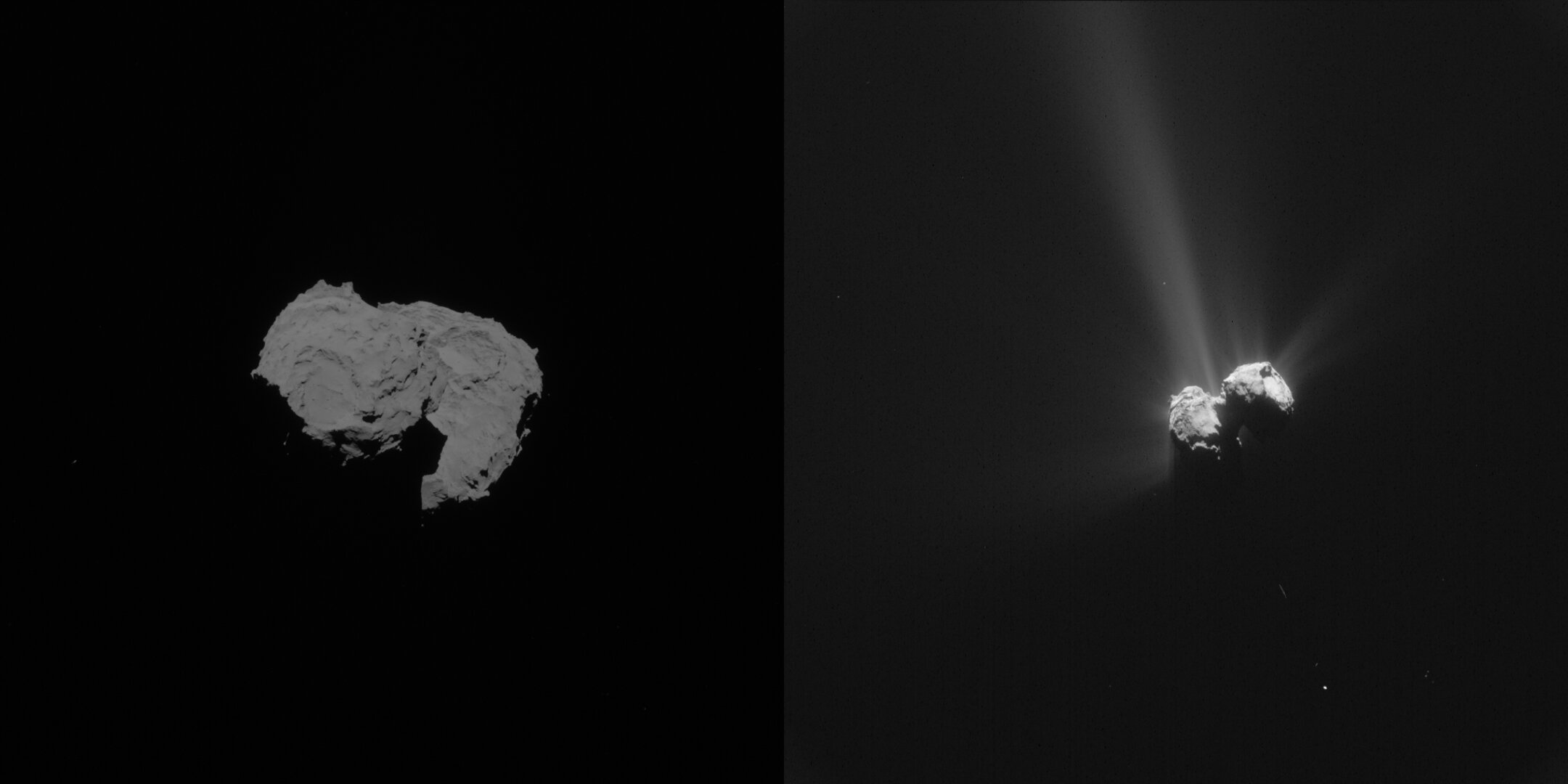 What a difference a year can make. Rosetta arrived at Comet 67P/Churyumov–Gerasimenko on 6 August 2014, achieving rendezvous at a distance of 100 km before moving even closer to the nucleus in the following weeks. The image shown on the left was taken with the navigation camera, NavCam, on rendezvous day, when Rosetta was about 121 km out.

At the time, the curious shape of this double-lobed object, so familiar to many now, had only been revealed a couple of weeks earlier. Over the course of the following 12 months, Rosetta has flown around the comet at a wide range of distances, from as far as a few hundred kilometres and as close as 6 km from its surface, investigating different regions as they came into view.

The image on the right was taken on 6 August 2015, exactly a year to the day of Rosetta's historic rendezvous, from a distance of 261 km. During this time, the comet has moved along its orbit much closer to the Sun – from almost 540 million km last year to around 186 million km this week – and the intensity of the sunlight has increased significantly, by more than seven fold, greatly boosting the comet’s activity. As the solar radiation has been warming its frozen ices, these have sublimated, turning into gas, and pouring out into space. The gas drags the dust along with it and together they form the comet’s fuzzy atmosphere, or coma.

The comet’s increased exposure to the Sun’s energy and its resulting activity can be discerned in several differences between these two images, which have been processed in a similar way in order to enable a meaningful comparison.

Equally importantly, the region around the nucleus is dark in 2014, as there is relatively little material flowing away from it. The 2015 counterpart is releasing prominent outflows and jets of material, and the overall environment is brighter in the recent image, with unlit patches of the nucleus standing out as a silhouette against it.

The increased activity is the reason for the larger distance of Rosetta from the comet today: the increased concentration of gas and dust over the last few months means the spacecraft has had to back off in order to avoid confusing its startrackers. It is now studying the comet from safer distances, and is currently operating some 300 km out.

Portrayed in the right image are also the comet’s neck region and different portions of the large lobe, some of which only came into view in the past few months, as seasons changed on the comet in May 2015.