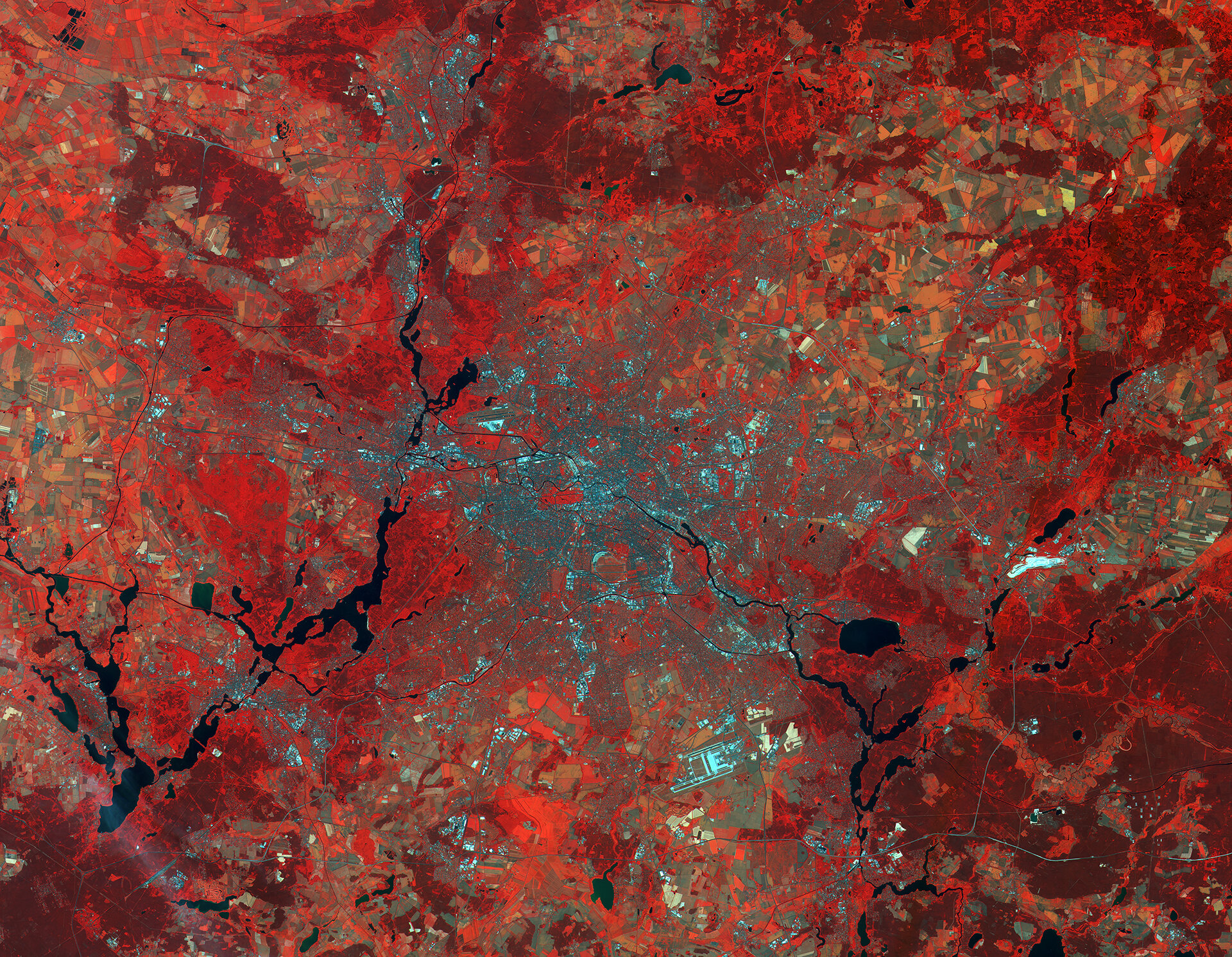 This Sentinel-2A false colour image features the city of Berlin.

As well as being Germany’s capital and its largest city, Berlin is also considered the cultural centre of the country. The city lost its capital status in 1945, but became the capital again on 3 October 1990 when Germany was reunified following the fall of the Berlin Wall in 1989. Reunification is celebrated every year.

Reminders of the city’s turbulent 20th-century history include the Holocaust Memorial and the Berlin Wall’s graffitied remains. The 18th-century grand classical Brandenburg Gate in the western part of the city centre has become a symbol of reunification.

Berlin is also known for its art scene, nightlife, modern architecture, media and science. Home to renowned universities, orchestras, museums, entertainment venues, and host to many sporting events, the city has become a sought-after location for international film productions.

In the Mitte district, which is the historical heart of the city, the Tiergarten park is clearly visible. It was once a hunting ground in West Berlin, but today it is a favourite among locals thanks to its central location. It is a park of great beauty with lawns, meadows, ponds, flowerbeds, landscaped gardens and home to the Berlin Zoo.

The image clearly shows how green the city is, with the two large lakes – the Tegeler See and the Wannsee – on its western side. Only 7 km from the centre is Tegel International Airport, surrounded by a large highly vegetated area.

The former military airport, visible in the lower central part of the image, is now a public park, and not for the first time in its history. Originally, the Tempelhofer Feld was also a parade ground. As soon as the military cleared the site, the locals would swarm in thousands to enjoy their free time. After the airport closed in 2008, the city reclaimed this huge open space, comprising an ex-hangar, which is now one of the world’s largest buildings used for exhibitions.

With three entrances open from sunrise to sunset, it is a space nearly three times the size of London’s Hyde Park, including a 6 km trail for cycling, skating and jogging, a BBQ area, a dog-walking field and an enormous picnic area for all visitors.  An area that was off-limits to locals for a century now allows everyone to roller-blade down a runway or barbecue sausages in the shade of an airport terminal.

The Spree River snakes its way across the entire image. Museum Island lies in the middle of the river, with the Berlin Cathedral and five museums. Since 1999, the museum complex has been the only architectural and cultural ensemble that is part of UNESCO world heritage.

Captured by Sentinel-2A on 9 July 2015, this image is featured on the Earth from Space video programme.