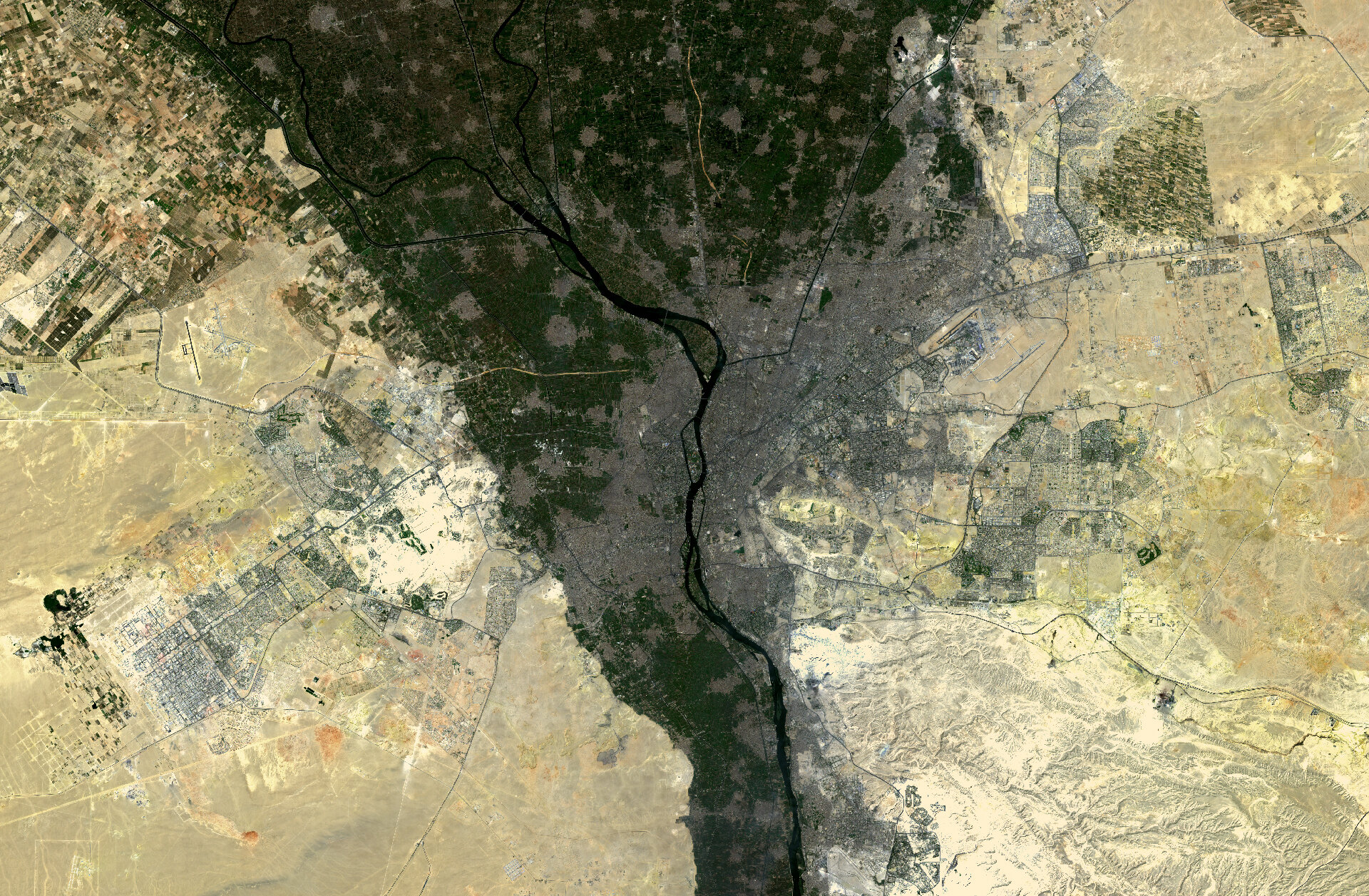 This image from Sentinel-2A on 13 August features Cairo, in Egypt.

The capital of Egypt, Cairo is one of the largest cities in Africa. It has existed for over 1000 years on the same spot on the Nile River banks. Located in the northeastern part of the country, Cairo is the passage to the Nile delta.

The Nile River is the father of African rivers and the longest river in the world. With a length of some 6650 km, it rises south of the equator and flows northwards through northeastern Africa, draining into the Mediterranean Sea.

The river is the cause of the strong contrasts we see in the image. The river’s fertility allowed the Egyptians to thrive despite the arid surrounding desert. It has always delivered the necessary water to transform the desert into a lush garden, where produce such as tomatoes, potatoes, sugar cane, rice and even cotton are grown. The Nile Delta, in fact, ranks among the world’s most fertile farming areas.

The sharp borderline between green fields and the yellow–brown desert is clear. Notice how the area is greener on the west side – the terrain is flatter, so more easily irrigated than the higher terrain to the east.

The city of Cairo shows striking contrasts. Along the well-irrigated shoreline, the green reveals the thick vegetation, while the grey areas denote the dense city. In the older areas to the east, however, beneath the foothills of the Eastern Desert and the rocky Muqaṭṭam Hills, brown and ochre are the dominant colours.

The city continuously mixes ancient and new. The Pyramids of Giza, erected on a rocky plateau on the west bank of the Nile, stand at the southwestern edge of the city, while the world’s oldest surviving obelisk in the northeast marks the site of Heliopolis, a suburb of Cairo some 10 km from the city centre.

The 6th of October City, on the left side of the image, is a new city in the desert. It hosts students from various countries, as well as from Egypt, who study at its private universities.

Cairo’s various golf courses are also featured in this image, as well as the international airport, partly visible on the top right.

Sentinel2-A has been in orbit since 23 June, and is a multispectral high-resolution imaging mission for land monitoring, to provide imagery of vegetation, soil and water cover, inland waterways and coastal areas.