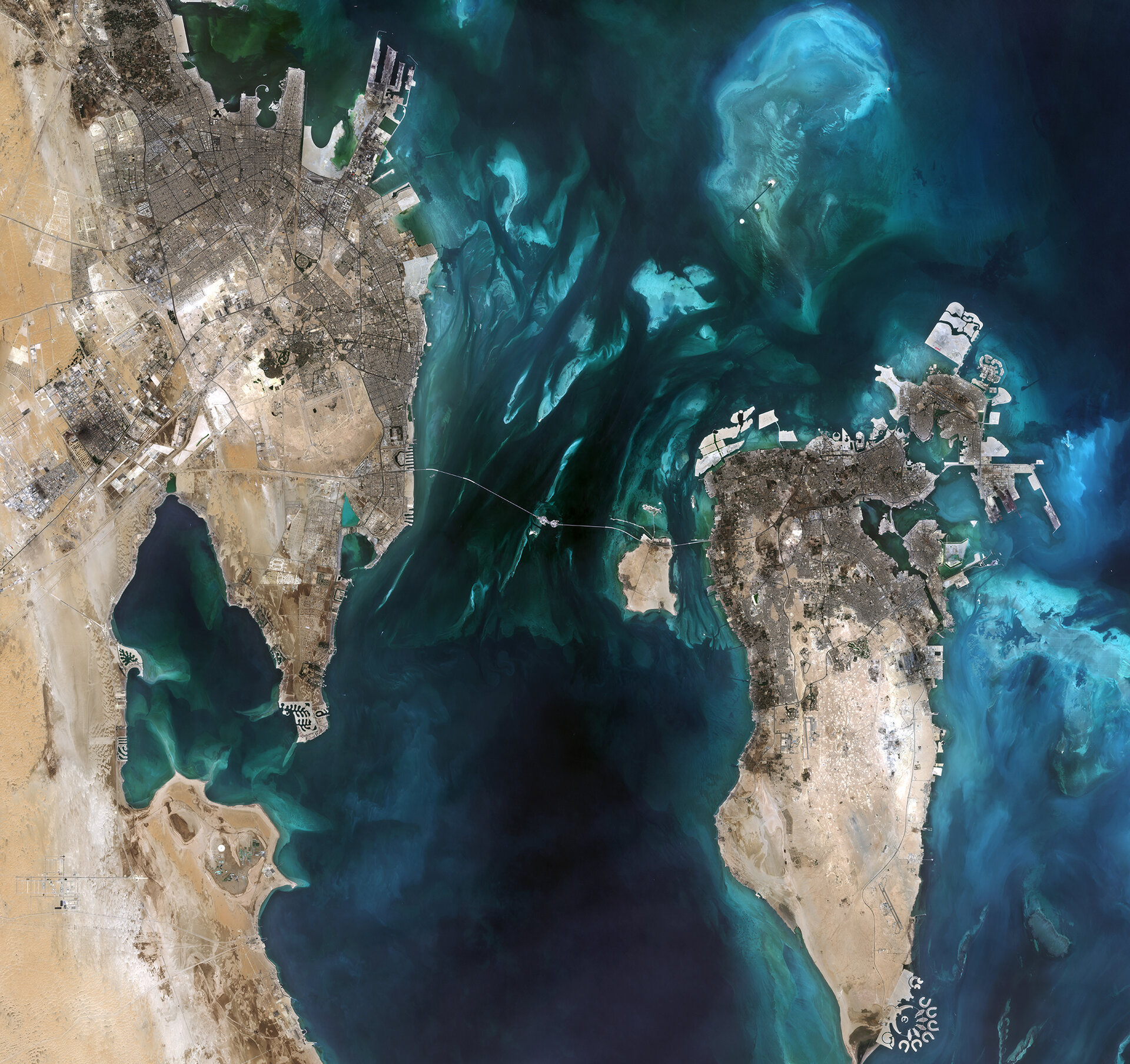 Colours of the Persian Gulf

This beautiful, natural-colour image from Sentinel-2A on 18 September 2015 features the small nation of Bahrain and parts of eastern Saudi Arabia.

Located on the southwestern coast of the Persian Gulf, Bahrain is a small Arab state, made up of an archipelago consisting of Bahrain Island and some 30 smaller islands.

Owing to the high-resolution multispectral instrument on Sentinel-2A, the colour difference of the various types of surfaces is striking.

In the middle of the image, on the Persian Gulf, the King Fahd Causeway is clearly visible. Built between 1981 and 1986, it consists of a series of bridges and stretches of road connecting Saudi Arabia and Bahrain. The Saudi and Bahraini passport control centres are also noticeable in the middle of the Causeway.

On the right of the image is the island of Bahrain, home to some 1.5 million people, with its modern capital Manama featured at the top. The greys represent the densely built city centre and surrounding towns.

Strikingly relaxed and cosmopolitan, Manama has been at the centre of major trade routes since antiquity.

On the top right part of the island, on a smaller island about 7 km northeast of the capital, Bahrain International Airport is visible.

Most of Bahrain is a flat and arid desert plain, with recurrent droughts and dust storms the main natural dangers for its inhabitants. Famous for its pearl fisheries for centuries, today it is also known for its financial, commercial and communications sectors.

Towards the central left part of the island, Bahrain University is observable. Also visible, the Al Areen Wildlife Reservation, both a nature reserve and zoo, one of the five protected areas of the country, and the only protected area on land.

On the bottom-right tip of the island a series of horseshoe-shaped artificial atolls are clearly visible. Durrat Al Bahrain, one of the largest artificial islands in Bahrain, comprises six atolls and five fish-shaped islands.

On the left side of the image, in Saudi Arabia, part of the Rub’ al-Khali, the world’s largest sand desert, is also visible.

Distinct throughout the entire image, the striking variations of blue represent the shallow versus deep waters, with the presence of coral reefs.