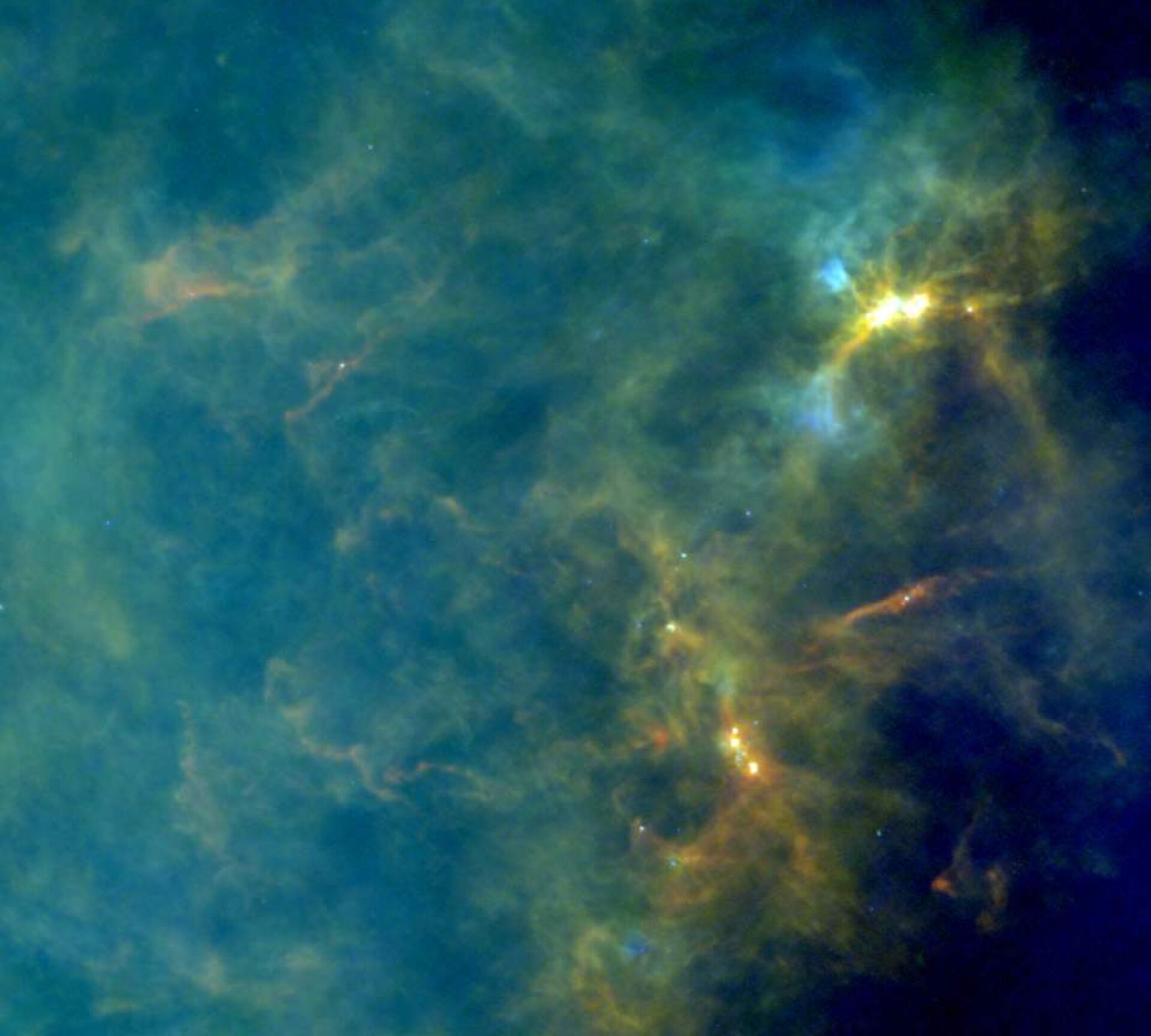 The interstellar medium fills the ‘empty’ space between the stars in our galaxy. It is a mix of molecular clouds, cold and warm gases, regions of electrically charged hydrogen, and more.

Molecular clouds are the densest part of the interstellar medium, holding most of its mass in the form of hydrogen gas. ESA’s Herschel space observatory has revealed that many are built around filaments, with dense threads snaking throughout each cloud. These filaments potentially transport material, and, when massive enough, are known to form new stars.

This Herschel image shows the Serpens Core, the heart of a giant molecular cloud. The Core is the bright clump towards the upper right, with a more diffuse secondary cluster, named Ser G3-G6, shown at the bottom right. Also visible as a faint yellow glow towards the upper left of the frame is a region known as LDN 583 that shines brightly in the far-infrared.

Giant molecular clouds contain up to 10 million times the mass of the Sun, and can stretch for hundreds of light-years. Compared to the rest of space they are dense, holding up to a thousand atoms per cubic centimetre – and even more in star-forming regions. However, these properties are relative: even at their densest, these clouds are more than 10 times emptier than the best laboratory vacuums we can produce on Earth.

These giant clouds are complex formations, most often made up of filaments mixed with clumpy and irregular folds, sheets and bubble-like structures. A typical spiral galaxy like the Milky Way can contain thousands of them, accompanied by many of their smaller relatives.

Serpens is an ideal target for scientists wanting to know more about giant molecular clouds, because it lies just 1400 light-years from us. Scientists compared Herschel’s observations of this cloud to a state-of-the-art simulation to find out more about the cloud’s properties, and to test the accuracy of their model.

They discovered a radial network of filaments stretching throughout the Serpens Core, filaments that are predicted to break and fragment to form the cores of new stars. These filaments resemble the spokes of a wheel, with the Core forming the hub.

This three-colour image is made from observations with Herschel’s PACS camera (blue and green) and SPIRE camera (red). The size of the region shown is 1.7x1.9º on the sky, where 1º corresponds to about 25 light-years.