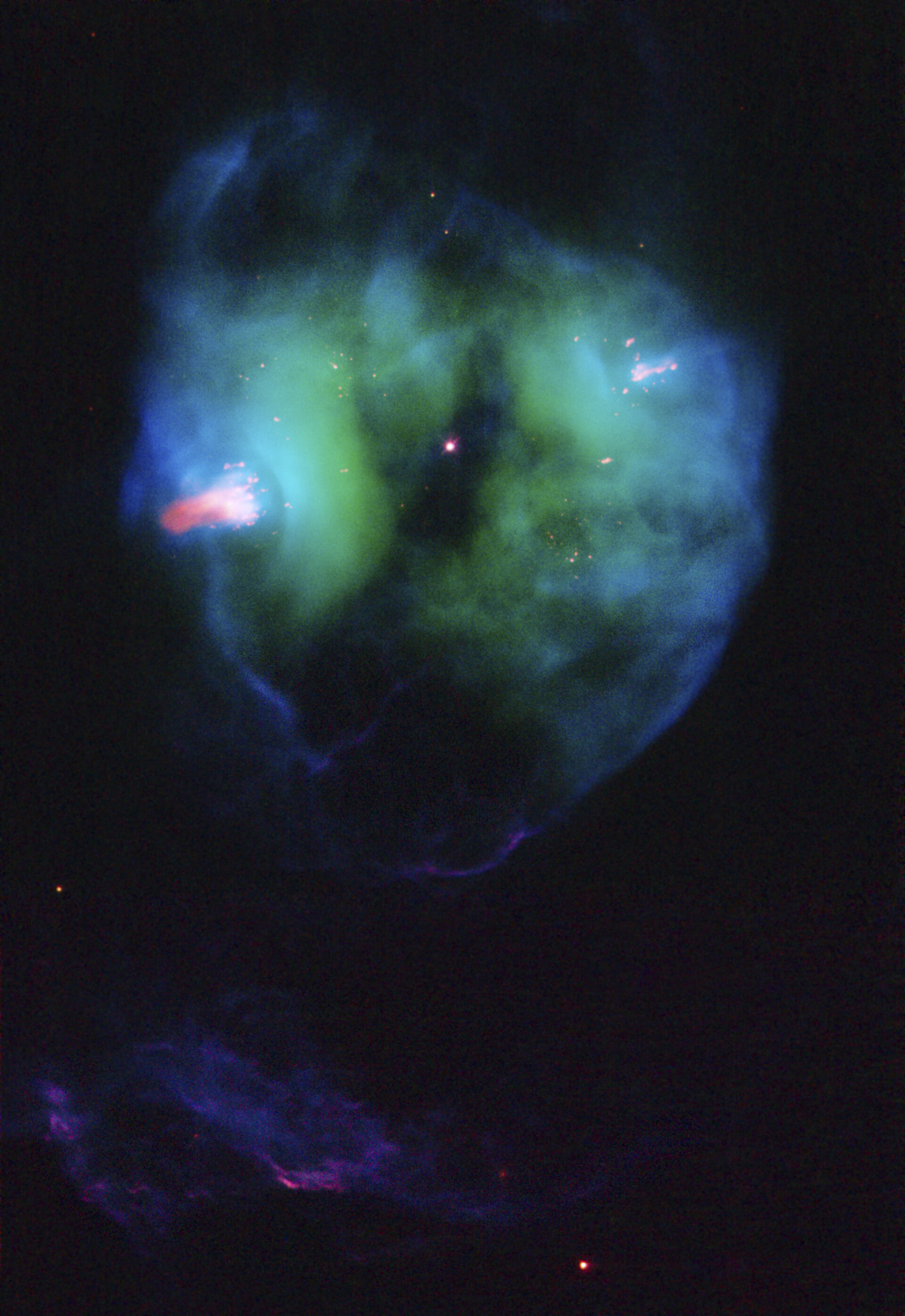 A cosmic trick of the eye

Stars of different masses end their lives in different ways. While truly massive stars go out in a blaze of glory, intermediate-mass stars — those between roughly one and eight times the mass of the Sun — are somewhat quieter, forming cosmic objects known as planetary nebulas.

Named because of their vague resemblance to planets when seen through early, low-resolution telescopes, planetary nebulas are created when a dying star flings off its outer layers of gas into space. This cloud forms an expanding shell around the central star, while the star itself slowly cools to become a white dwarf. This is what has happened in this NASA/ESA Hubble Space Telescope image, taken in 2007, which shows a planetary nebula known as NGC 2371.

NGC 2371 resides 4300 light-years away from us, in the constellation of Gemini. It is one of the largest planetary nebulas known, measuring roughly three light-years across. Its progenitor star can be seen here as a pinprick of orange–-red light, surrounded by a green, blue and aqua-tinged puff of gas. This shell appears to have a regular, elliptical shape that is sliced in half by a dark lane running through the nebula, which also encompasses the central star.

This dark feature misled astronomers when NGC 2371 was initially catalogued because the two lobes visually resembled two objects, not one. As a result of this confusion, the nebula has two names in William Herschel’s New General Catalogue: NGC 2371 and 2372 (often combined as NGC 2371/2 or NGC 2371-2).

Two prominent pink patches are also visible on either side of the central star. These features are thought to be knots of gas, most likely jets, thrown off by the star at some point in the past. Their pink colour indicates that they are cooler and denser than their surroundings.

The nebula’s central star was once similar to the Sun, but is now only a shadow of its former self. It is slowly cooling after energetically shedding most of its gas, but has a long way to go yet. It currently boasts a scorching surface temperature of over 130 000ºC – some 25 times hotter than the surface of the Sun – and glows with the luminosity of at least 700 Suns.

The hot ultraviolet radiation streaming outwards into the nebula energises the gas it touches, causing NGC 2371 to glow in the beautiful aquamarine colours seen in this image.

This picture was taken in November 2007 by Hubble’s Wide Field Planetary Camera 2. It is a false-colour image created with a combination of filters to detect light coming from sulphur and nitrogen (shown in red), hydrogen (green) and oxygen (blue). The observations were gathered as part of the Hubble Heritage project.

This image was originally published on the Hubble Space Telescope website on 4 March 2008.