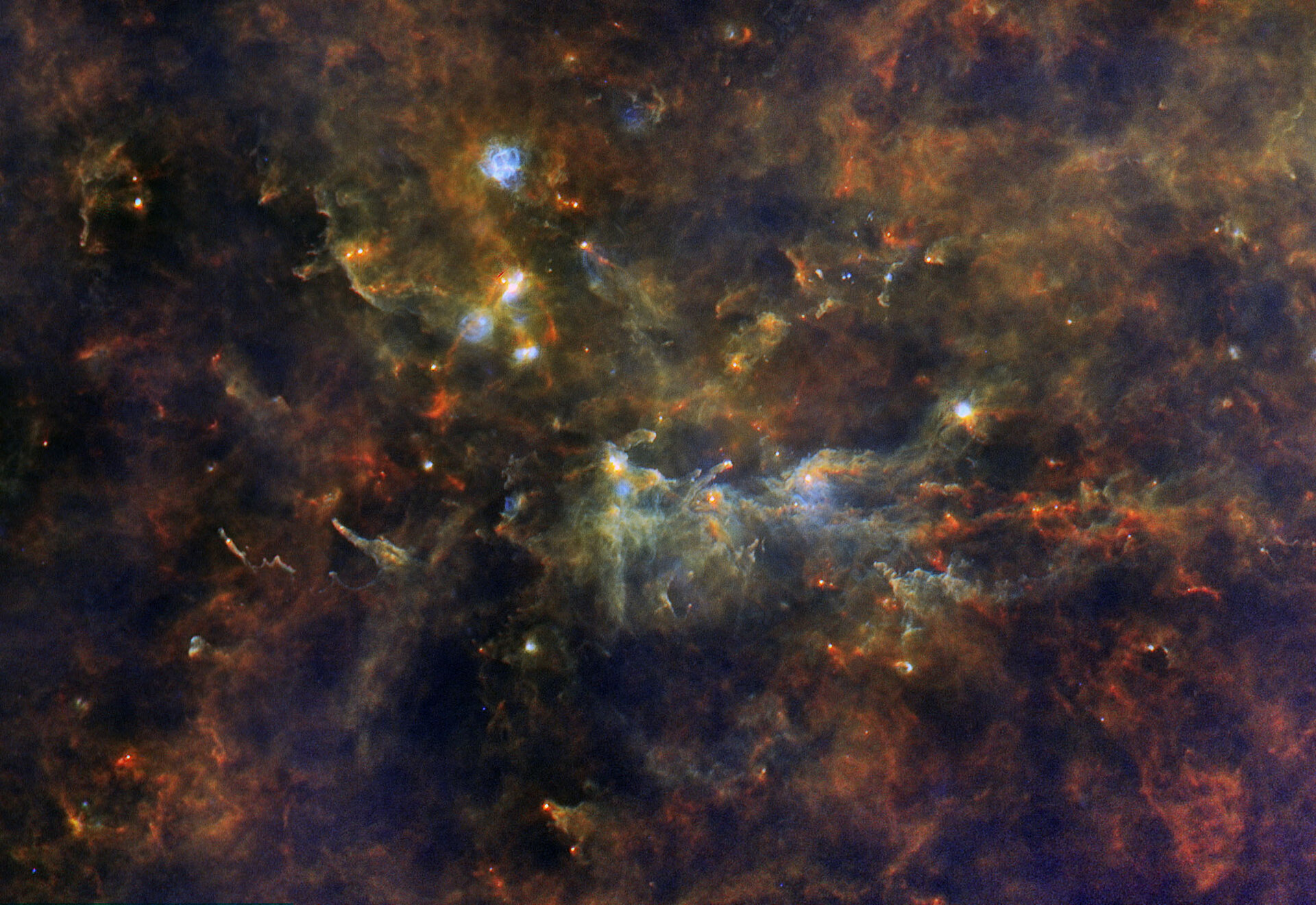 The Little Fox and the Giant Stars

New stars are the lifeblood of our Galaxy, and there is enough material revealed by this Herschel infrared image to build stars for millions of years to come.

Situated 8000 light-years away in the constellation Vulpecula – latin for little fox – the region in the image is known as Vulpecula OB1. It is a ‘stellar association’ in which a batch of truly giant ‘OB’ stars is being born.

The vast quantities of ultraviolet and other radiation emitted by these stars is compressing the surrounding cloud, causing nearby regions of dust and gas to begin the collapse into more new stars. In time, this process will ‘eat’ its way through the cloud, transforming some of the raw material into shining new stars.

The image was obtained as part of Herschel’s Hi-GAL key-project. This used the infrared space observatory’s instruments to image the entire galactic plane in five different infrared wavelengths.

These wavelengths reveal cold material, most of it between -220ºC and -260ºC. None of it can be seen at ordinary optical wavelengths, but this infrared view shows astronomers a surprising amount of structure in the cloud’s interior.

The surprise is that the Hi-GAL survey has revealed a spider’s web of filaments that stretches across the star-forming regions of our Galaxy. Part of this vast network can be seen in this image as a filigree of red and orange threads.

At visual wavelengths, the OB association is linked to a star cluster catalogued as NGC 6823. It was discovered by William Herschel in 1785 and contains 50–100 stars. A nebula emitting visible light, catalogued as NGC 6820, is also part of this multi-faceted star-forming region.

The giant stars at the heart of Vulpecula OB1 are some of the biggest in the Galaxy. Containing dozens of times the mass of the Sun, they have short lives, astronomically speaking, because they burn their fuel so quickly.

At an estimated age of two million years, they are already well through their lifespans. When their fuel runs out, they will collapse and explode as supernovas. The shock this will send through the surrounding cloud will trigger the birth of even more stars, and the cycle will begin again.