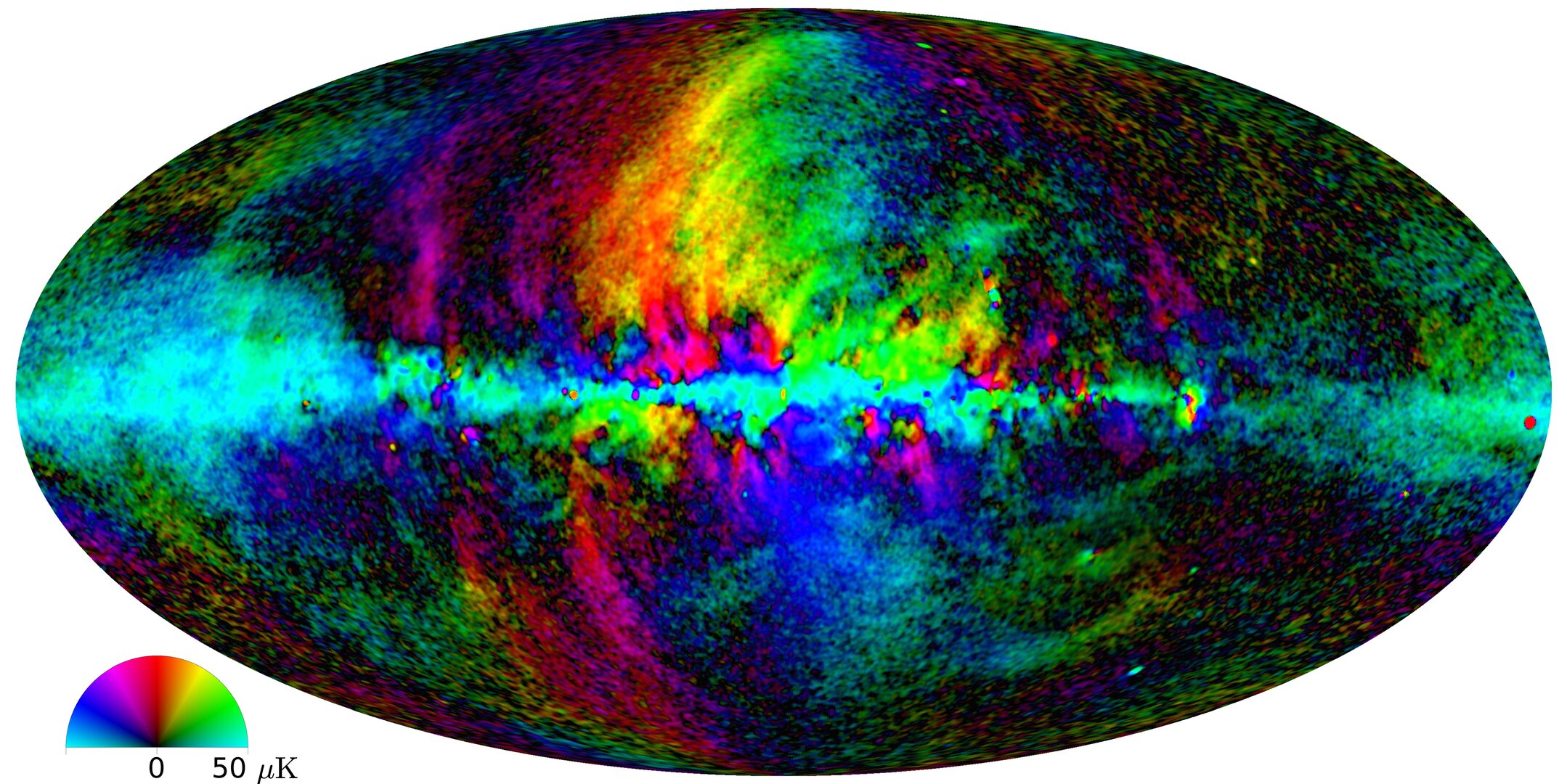 A mysterious ring of microwaves

Fifty years ago, astronomers discovered a mystery. They called it Loop I. Today, we still have not fully resolved the mystery of how this giant celestial structure formed but we do now have the best image of it, thanks to ESA’s Planck satellite.

Loop I is a nearly circular formation that covers one third of the sky. In reality, it is probably a spherical ‘bubble’ that stretches to more than 100º across, making it wider than 200 full Moons. Its absolute size, however, is extremely uncertain because astronomers do not know how close it is to us: estimates to the centre of the bubble vary from 400 light-years to 25 000 light-years.

What they do know is that the structure shows up in many different wavelengths, from radio waves to gamma rays. Planck sees Loop I in microwaves. This image’s colours reflect the polarisation – the direction in which the microwaves are oscillating.

Our eyes are not sensitive to this information in the visible light, where we perceive only the intensity and colour. Planck, however, can detect all three of these characteristics in the microwaves it targets.

The microwaves detected by Planck are emitted by electrons that are being accelerated by the Galaxy’s magnetic field.

Loop I is most visible in the sky’s northern hemisphere. Astronomers refer to this portion as the north polar spur. It can be seen in this image as the yellow arc. This fades to purple and can be traced into the southern hemisphere, completing the circle. The blue band spanning the image horizontally is the Galactic Plane.

The most popular interpretation places Loop I close to us. If this is correct, it could be related to the ‘Scorpius–Centaurus OB Association’, a region of high-mass star formation that has been active for over 10 million years. Loop I could well be a supernova remnant, a giant bubble hollowed out by the explosion of stars in the OB association.

It is likely that the stars responsible for Loop I have long since dispersed, so what we see is the ‘smoke’ rather than the ‘fire’ of the explosions.

High-mass stars burn their nuclear fuel so quickly that they live only a few million years before exploding. As these titanic supernovas bloom, their blast waves carve bubbles in the surrounding gas. This compresses the Galaxy’s magnetic field into the bubble ‘walls’, making it stronger and more efficient at accelerating the electrons to produce the observed radiation.

Loop I could well be the combined super-bubble from a number of such cataclysms. As the electrons lose energy and diffuse into the wider Galaxy, so Loop I will eventually fade and disappear. This is likely to take a few million years.

If the loop is more distant, then it could conceivably be the result of an outburst from around the black hole at the centre of the Galaxy.

(A version of the image showing the position of Loop I is available here. The colour represents the direction of polarisation, while the brightness of the colour measures the intensity of polarisation.)