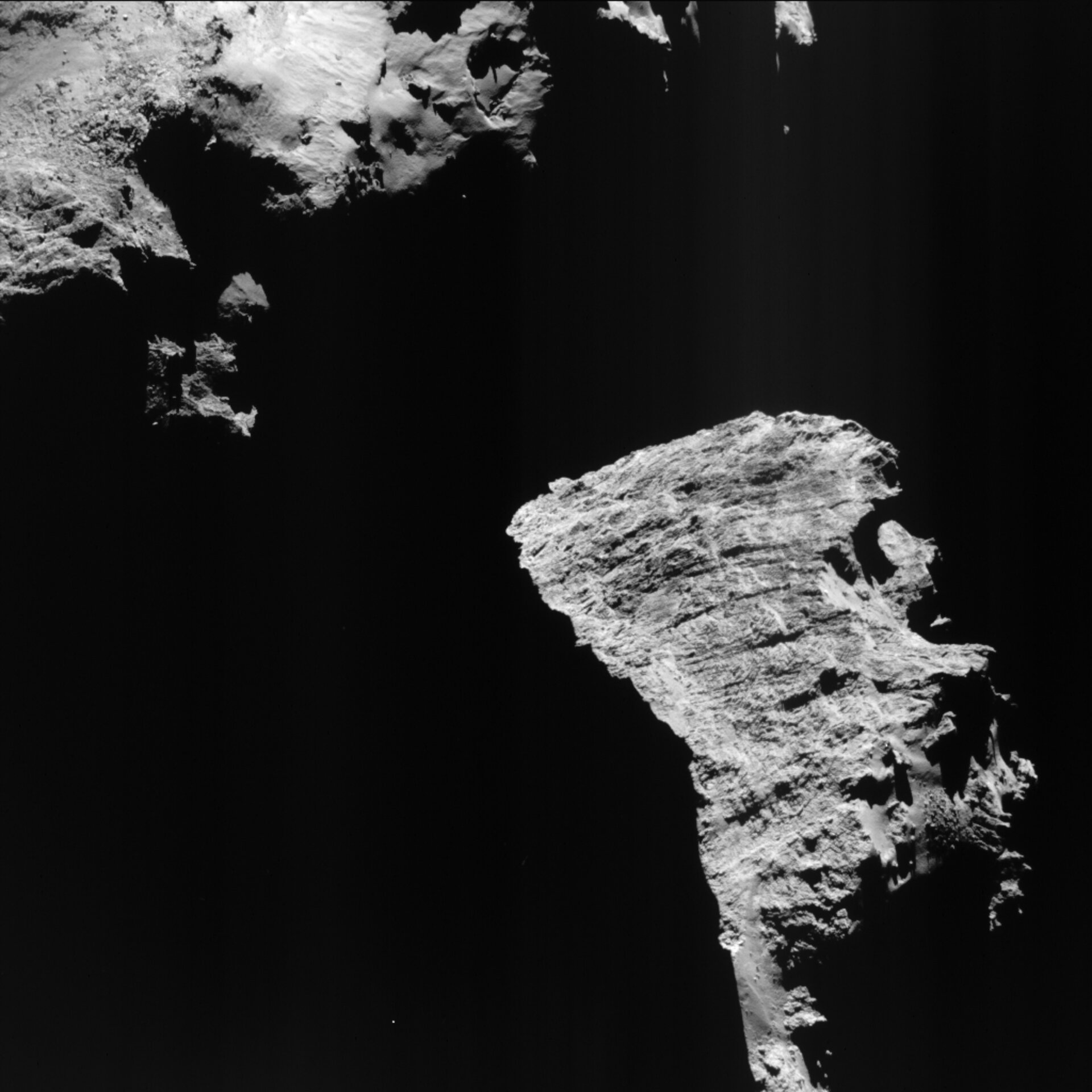 This striking view of Comet 67P/Churyumov–Gerasimenko reveals portions of both comet lobes, with dramatic shadows on the 'neck' region between them. It was taken by Rosetta’s navigation camera (NavCam) on 30 June 2016, from a distance of 25.8 km, and measures about 2.3 km across.

Since reaching the comet on 6 August 2014, Rosetta has extensively mapped its surface. The comet nucleus has a curious shape consisting of two lobes that are often referred to as the 'head' and the 'body'.

Depicted in the lower right part of the image is the region Hathor, a very intriguing portion of the comet head, named after the ancient Egyptian deity of love, music and beauty. In this region, the head declines steeply towards the neck and body of the comet.

This view shows a good fraction of the 900-m high cliff that forms Hathor, with marked linear features crossing the region from left to right. Perpendicular to these, additional streaks and even small terraces can be seen.

Beyond the cliff of Hathor, on the right, are hints of the Ma'at region, named after the ancient Egyptian goddess of truth and balance.

In the upper right corner, smoother patches of the large comet lobe, or body, are visible, covered in dust and boulders. The large lobe casts its shadow on the comet's neck, which separates the two lobes and is hidden from view in this image.

You can use the comet viewer tool  to aid navigation around the comet’s regions.

Currently, Rosetta is on a 27 km x 9 km elliptical orbit around the nucleus; this weekend, it will move to a less eccentric, 9 km x10 km orbit, ahead of entering the end-of-mission orbit. The mission will continue its close-up investigation of the comet environment until the grand finale, a controlled descent of the spacecraft to the surface of the comet on 30 September.

This image is featured today on the ESA Rosetta blog: CometWatch 30 June.

This work is licensed under the Creative Commons Attribution-ShareAlike 3.0 IGO (CC BY-SA 3.0 IGO) licence. The user is allowed to reproduce, distribute, adapt, translate and publicly perform this publication, without explicit permission, provided that the content is accompanied by an acknowledgement that the source is credited as 'ESA - European Space Agency’, a direct link to the licence text is provided and that it is clearly indicated if changes were made to the original content. Adaptation/translation/derivatives must be distributed under the same licence terms as this publication. The user must not give any suggestion that ESA necessarily endorses the modifications that you have made. No warranties are given. The licence may not give you all of the permissions necessary for your intended use. For example, other rights such as publicity, privacy, or moral rights may limit how you use the material. Any of the above conditions can be waived if you get permission from ESA. To view a copy of this licence, please visit http://creativecommons.org/licenses/by-sa/3.0/igo