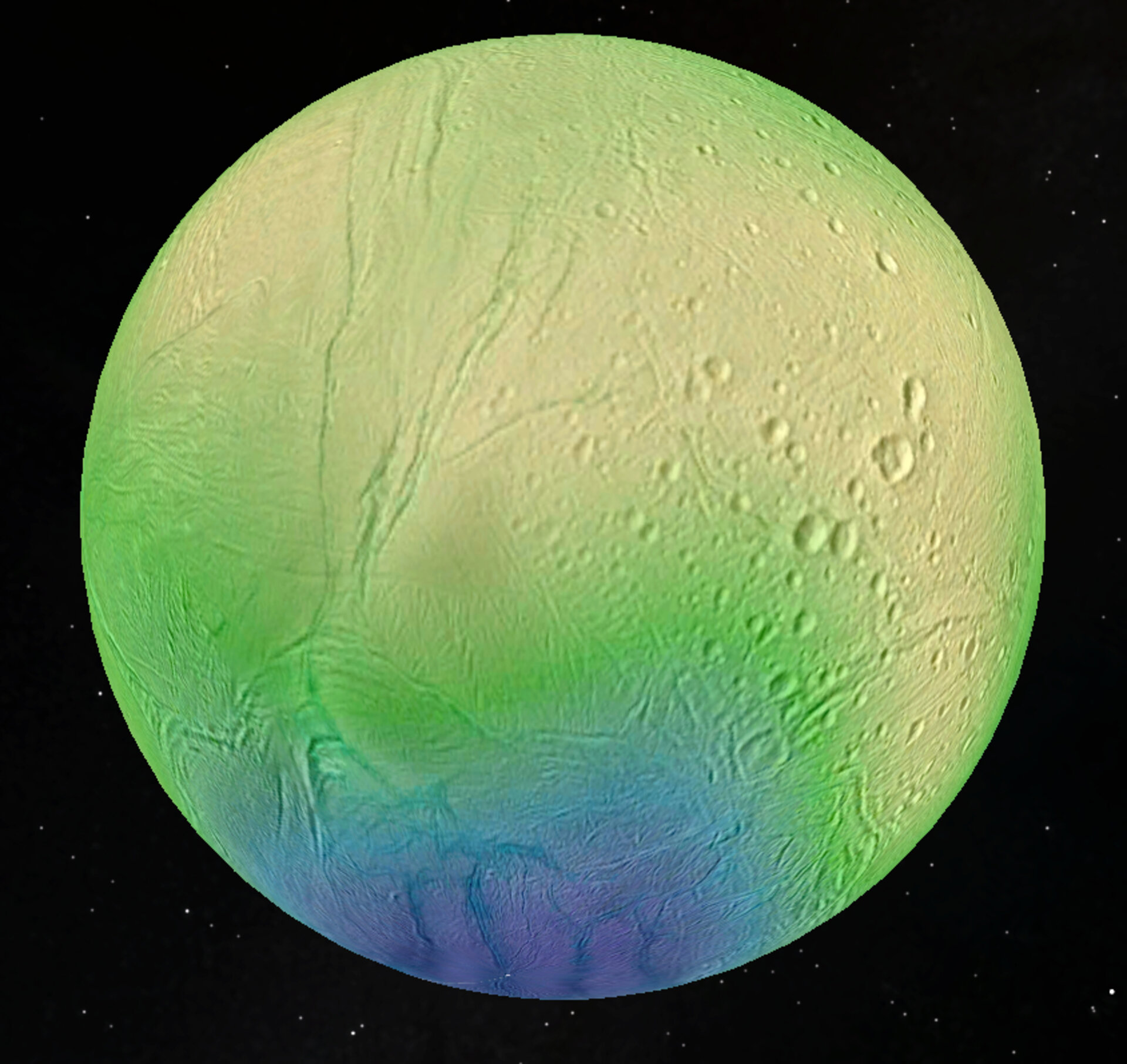 Enceladus and its paper-thin crust

Of all the icy moons in the Solar System, Saturn’s moon Enceladus is probably the ‘hottest’ when measured for its potential to host life. Despite its distance from Earth, it may also be the easiest to investigate.

Buried beneath its icy crust is a global ocean of water, much like the one scientists are convinced lies inside Jupiter’s moon Europa. The question is how to get below what is probably tens of kilometres of ice to see if there is life in the water.

Although this is the problem at Europa, at Enceladus the moon does some of the work for you. At its south poles, huge geysers of water jet into space. These come from the ocean depths and suggest that the ice there must be relatively thin for this to happen. But how thin? Planetary scientists may now have an answer.

The international Cassini spacecraft has been paying particular attention to Enceladus since arriving at Saturn in 2004. Indeed, it was Cassini that discovered the geysers on Enceladus in the first place. Now there are more than 100 individual jets known on the moon, each spewing water into space.

A team of independent researchers have now taken all of the data about Enceladus collected by the spacecraft and built a computer simulation of the moon that includes the thickness of the ice crust.

This picture of Enceladus has been created using data taken by Cassini’s high-resolution camera. The ice crust thickness, indicated by the colour, has then been plotted over the moon’s surface. According to the model, the thickness varies between about 35 km in the cratered equatorial regions (yellow) to less than 5 km in the active south polar terrain (blue).

In astronomical terms, this is paper-thin. The model predicts that the 505 km-wide moon contains a core that is 360–370 km in diameter. The rest is ocean and the ice crust, with the ice crust itself having an average thickness of 18–22 km.

Remarkably, however, the model predicts that the thickness of the ice reduces to less than 5 km at the south pole. This could make it easier for the water to escape along cracks and fissures.

Last year Cassini flew through the geysers, analysing the water with its instruments. On previous occasions, the discovery of silica particles, likely originating from Enceladus, and the presence of methane in the water plumes indicated there is hydrothermal activity at the ocean’s floor. This water and the chemicals were then transported from the floor to the base of the ice crust, and subsequently jetted through and out into space.

No one knows how the geysers are powered but showing that the ice crust could be much thinner than previously thought is intriguing.