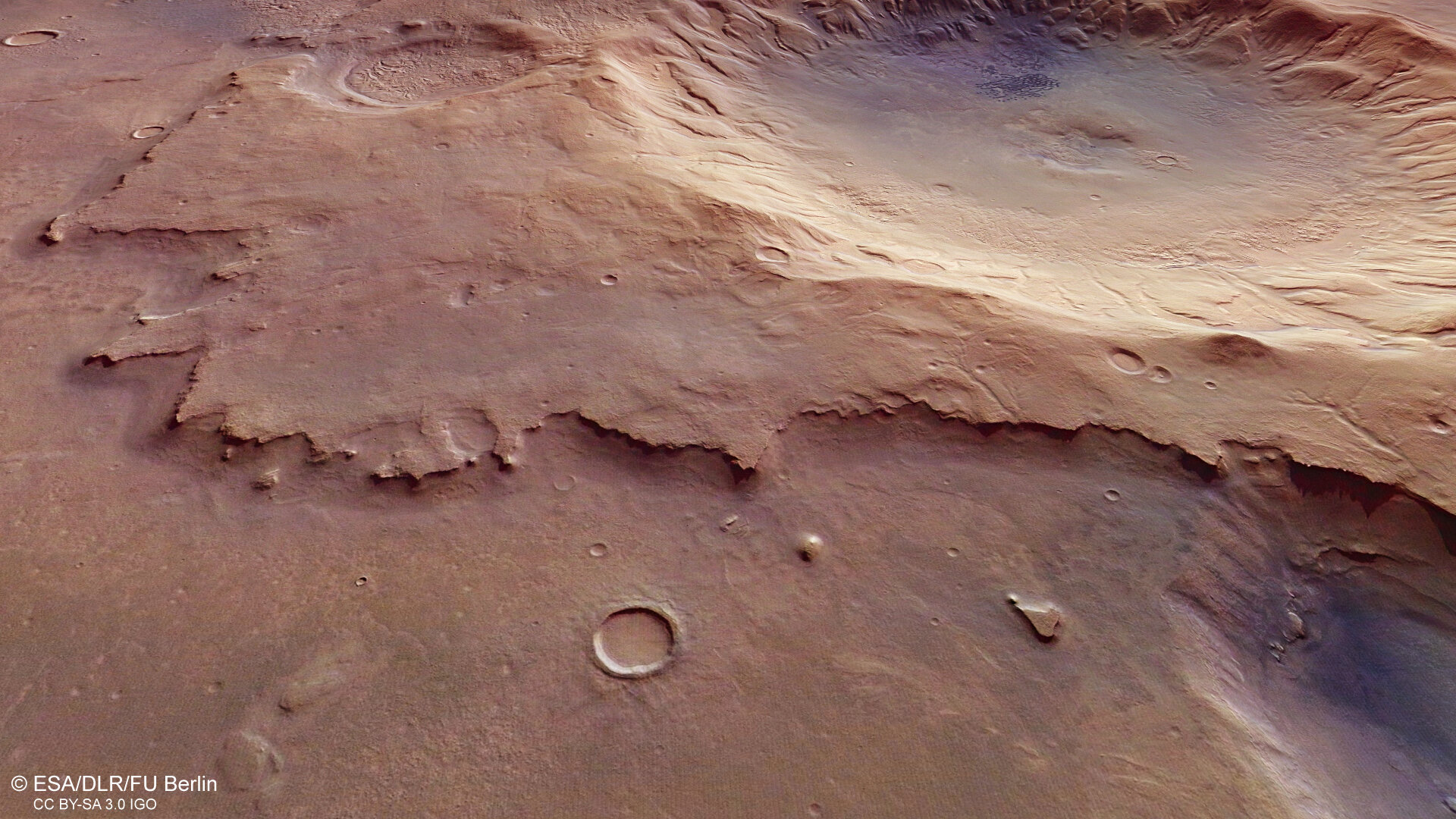 This striking perspective view from ESA’s Mars Express shows an unnamed but eye-catching impact crater on Mars. This region sits south-west of a dark plain named Mare Serpentis (literally ‘the sea of serpents’), which in turn is located in Noachis Terra (literally ‘the land of Noah’).

Noachis Terra is one of the oldest known regions on the Red Planet, dating back at least 3.9 billion years— in fact, the earliest martian era, the Noachian epoch, is named after it. Noachis Terra is representative of ancient Mars’ surface, which is characteristically peppered with craters that have been preserved for billions of years, although many have degraded over time.

The crater visible on the top right of this image is around 4 km deep and 50 km in diameter. At its very centre is a small depression known as a central pit. These are common in craters on rocky worlds throughout the Solar System, especially on Mars, and are thought to form as icy material explosively vaporises and turns to gas in the heat of the initial crater-forming collision.

The outer walls around the crater are slightly raised above its surroundings. These stacked deposits may have formed during the impact that carved out the crater itself. As a rocky impactor slammed into the surface of Mars it likely compacted the loose and powdery material — small-grained dust and soil dubbed ‘regolith’ — to form a small plateau that has stood the test of time.

Just within the crater walls are channels and valleys threading and weaving down the inner slope  — these are thought to have been carved and sculpted by running water. This water, locked up within the soil as groundwater and ice, would have melted as the Sun illuminated the crater walls, driving fluvial erosion processes and sketching thin lines down towards the centre of the crater.

This image was created using data from the Mars Express High Resolution Stereo Camera’s stereo channels (resulting in this oblique perspective) as well as its colour and nadir channels (creating the colour). The data were obtained on 29 July 2015 during orbit 14680. The resolution is approximately 14 m per pixel and the image is centred at 37° East and 35° South.

The image is a perspective view from a series that includes a colour nadir view, a colour-coded digital terrain model and a 3d anaglyph.