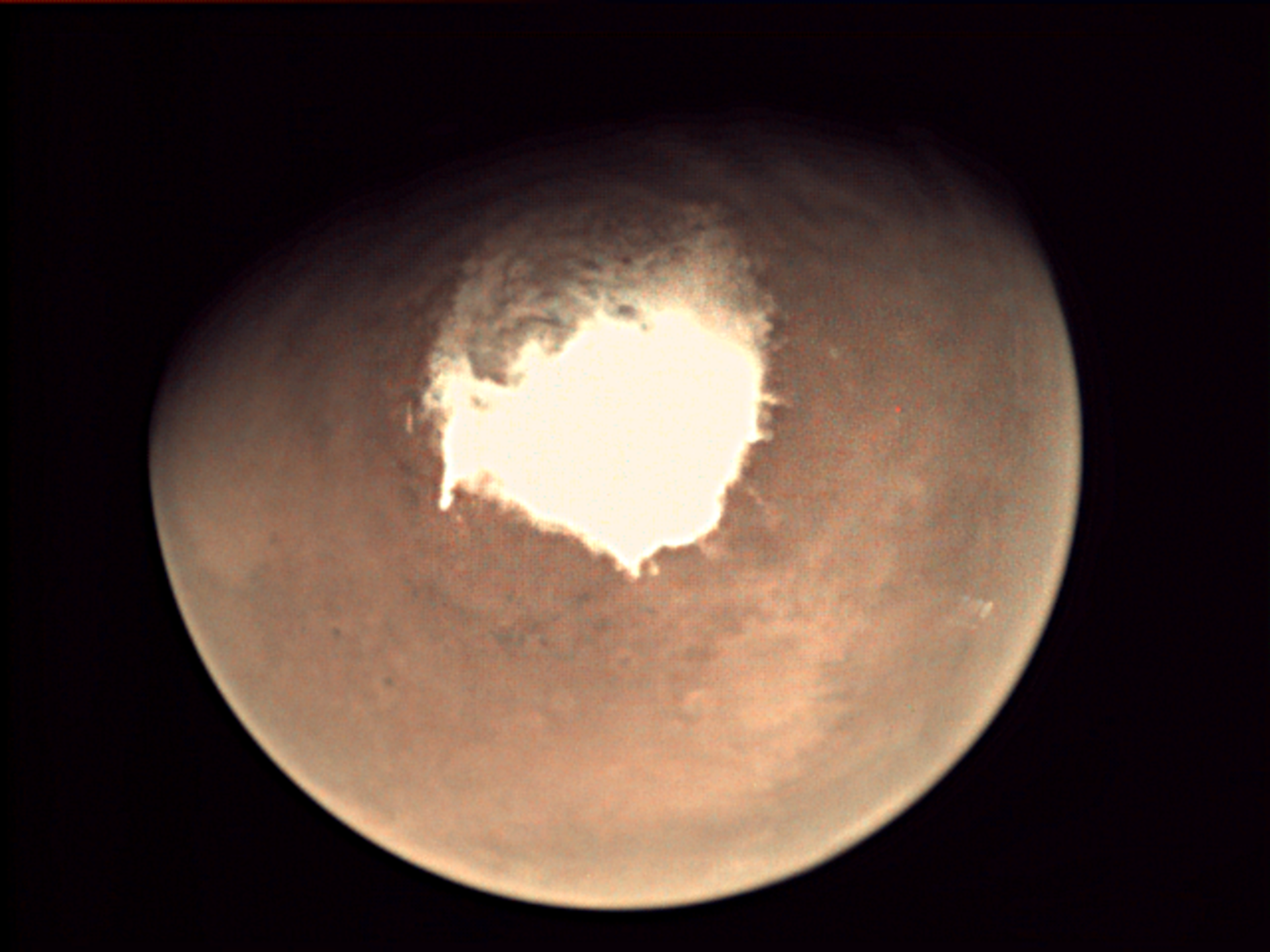 Mars as seen by the webcam on ESA’s Mars Express orbiter on 16 October 2016, as another mission, ExoMars, is about to reach the Red Planet.

A joint endeavour between ESA and Russia’s Roscosmos space agency, ExoMars 2016 comprises the Trace Gas Orbiter and the Schiaparelli entry, descent and landing demonstrator. After a seven-month journey, the two spacecraft are closing in on their destination, with the main craft entering orbit around Mars and Schiaparelli landing on 19 October.

This image was taken on 16 October, a couple of hours before Schiaparelli separated from its mothership at 16:42 GMT. Following separation, Schiaparelli still has three days and some six million km to travel before entering the atmosphere on 19 October for a six-minute descent to a region in Meridiani Planum, close to the planet’s equator.

This recent view of the planet shows its southern pole, covered by a permanent ice cap consisting mainly of carbon dioxide. The target region for Schiaparelli’s landing is not visible, beyond the horizon on the left.

ExoMars will arrive when the planet is almost at its closest point to the Sun along its orbit, and during northern winter (southern summer). At this time in the year, wind speeds are likely to increase and could lead to regional or even global dust storms.

The image was taken with Mars Express’s simple, wide-angle camera, which was originally meant only to provide visual confirmation that its Beagle-2 lander had separated when they arrived at Mars in December 2003. Switched back on in 2007, the camera has since been used for outreach, education and citizen-science, and was eventually adopted as a professional science instrument by ESA earlier this year.

With its unique vantage point and wide field of view, this webcam can capture global images of the Red Planet, a capability currently available only on one other spacecraft operating there, India’s Mars Orbiter Mission.

Mars can be seen from Earth at the moment: it is visible as a red spot to the naked eye, low on the horizon towards the south in the early evening skies from the northern hemisphere, and reaching higher elevations in the evenings and early mornings from the southern hemisphere.

Amateur astronomers observing the Red Planet with a telescope can join the Mars focus group of the Pro-Am Collaborative Astronomy project, an international group sharing images of specific astronomical objects and events taken by the amateur community to support professional astronomers.

The Mars observing campaign originally started in 2014 to monitor the passage of Comet Siding Spring near the Red Planet, and later evolved into a group dedicated to observe Mars and to provide the astronomical community with a long timeline of Mars observations, especially during times of dust activity.

This image was published on Sunday 16 October on the camera's dedicated Flickr channel, where all Mars Express webcam images are automatically posted on a daily basis.