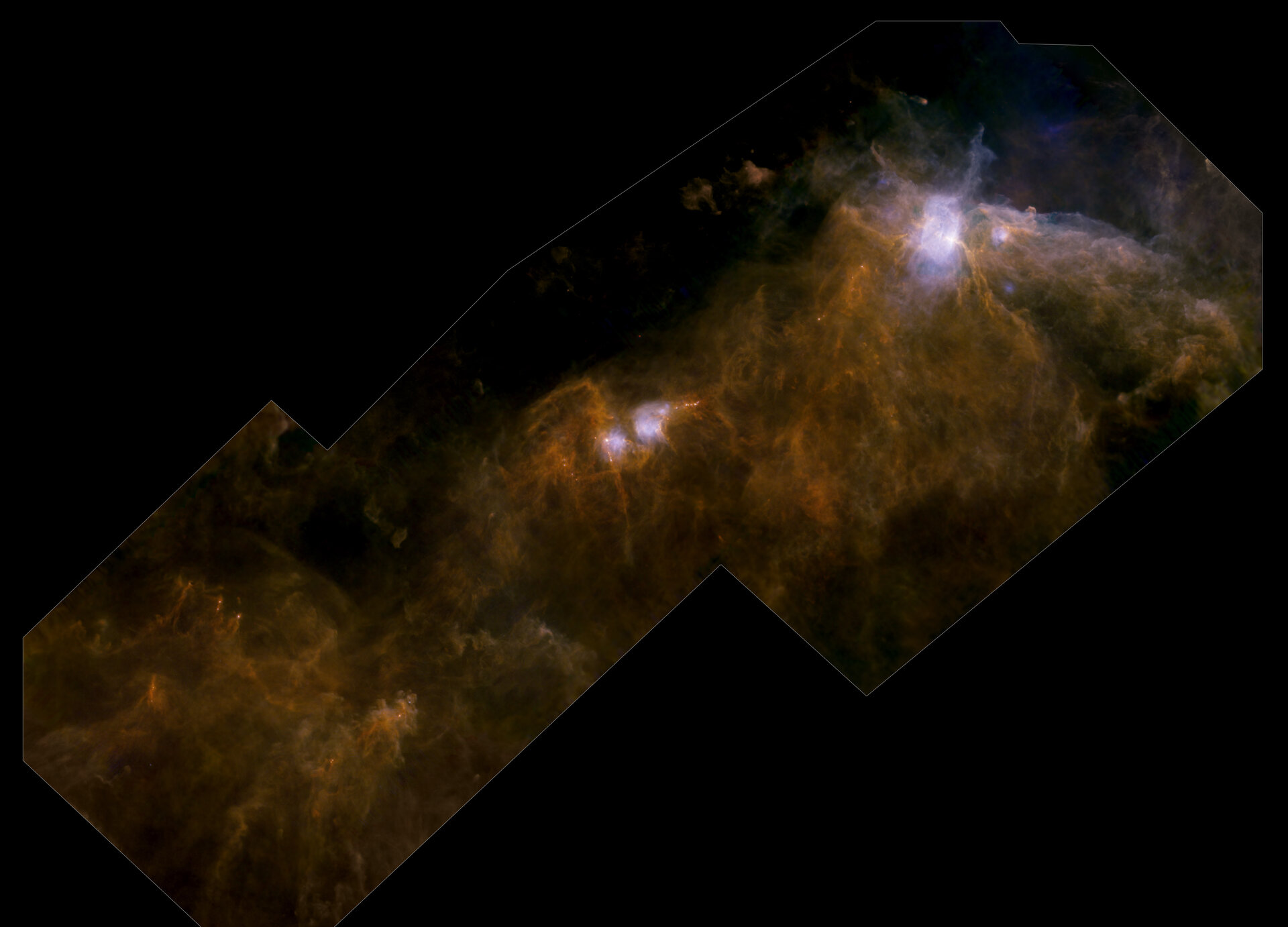 Herschel’s view of a molecular cloud

Pictured in this image by ESA’s Herschel observatory is the Orion B molecular cloud, a vast star-forming complex in the constellation Orion, the Hunter. Invisible to our eyes, these interstellar clouds are located near Alnitak, one of the stars in Orion’s Belt.

At about 1300 light-years from us, Orion B is one of the closest regions of star formation, where new stars take shape from billowing clouds of gas.

Observing the sky at far-infrared and submillimetre wavelengths from 2009 to 2013, Herschel could catch the faint glow of dust grains interspersed in these clouds. Astronomers can use this glow to trace the otherwise dark gas where star formation unfolds.

The densest portions of the cloud, where many protostars and newborn stars are found, stand out as the brightest regions in the image.

The large, bright region in the top right is the Flame Nebula, also known as NGC 2024. This emission nebula is also visible in optical observations owing to light from nearby newborn stars that has energised its gas and made it shine. The nebula was discovered in the late 18th century by William Herschel, the astronomer after whom ESA’s observatory is named.

The cloud seems to come to an abrupt end to the right of the Flame Nebula, where a sharp edge indicates that the material is being compressed by powerful winds blowing from clusters of massive stars located beyond the field of this image.

Protruding from this edge, and visible in this image as a small lump, is the iconic Horsehead Nebula. A thick pillar of interstellar material with a shape resembling an equine head, this nebula was first identified by astronomer Williamina Fleming in the 1880s. She spotted this dark nebula in photographic observations that were taken at optical wavelengths, where it appeared as a silhouette because of the obscuring effect of the dust interspersed in the gas.

Darker regions in the central and lower left parts of the image correspond to colder, less dense portions of the cloud where star formation is not as active. Nestled within the tangle of gas and dust, the two bright regions at the centre of the image are NGC 2071 and NGC 2068, two reflection nebulas, which reflect starlight and also shine brightly at visible wavelengths.

Full story: How Herschel unlocked the secrets of star formation