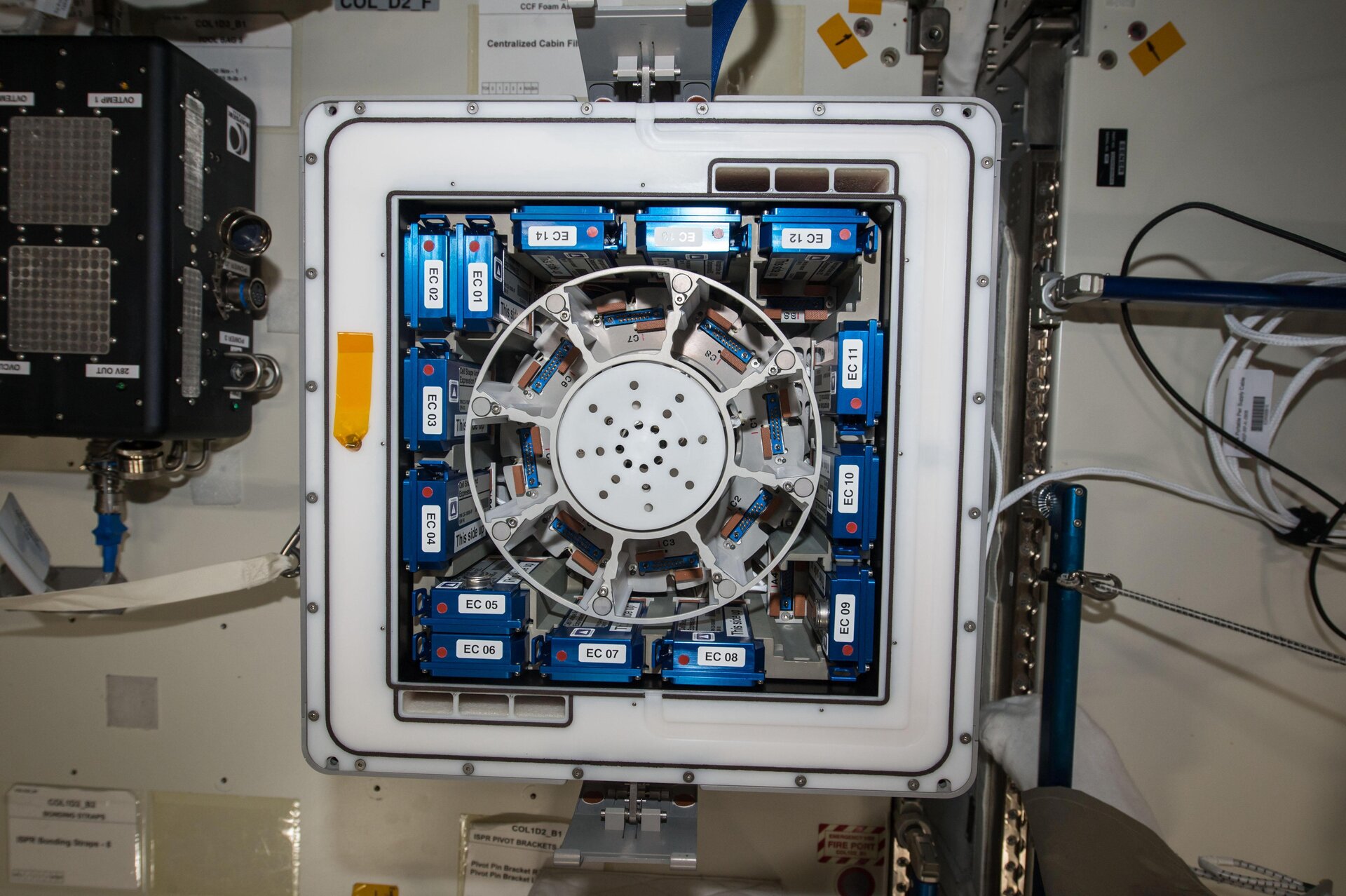 A miniaturised laboratory inside the orbital laboratory that is ESA’s Columbus module, this 40 cm cube has been one of its quiet scientific triumphs.

Kubik – from the Russian for cube – has been working aboard the International Space Station since before Columbus’ arrival in February 2008.

“Kubik hosts a wide range of life science experiments in weightlessness with minimal crew involvement,” explains Jutta Krause of the payload development team. “Research teams prepare their experiments and make use of existing or custom-built ‘experiment units’, which are each about the size of a box of pocket tissues.

“Once slotted into Kubik by an astronaut, they are automatically activated through internal  electrical connections, running autonomously on a programmed timeline until they are finally retrieved for return to Earth.

“At the centre of the temperature-controlled Kubik is a centrifuge to simulate gravity, so double experiments can be run with one unit in microgravity plus an Earth-gravity control or intermediate gravity level – giving researchers insight into whether any results they observe might be related to weightlessness or some other environmental factor, such as space radiation.”

The challenge for researchers is to miniaturise their experiments to fit within the confines of these compact units, adds team member Janine Liedtke: “We aim to refurbish experiment units as much as possible, so in some cases teams can adapt a previously flown unit, or else we can tailor new units to their needs.

“Why fly biological samples in weightlessness? Because we know many biological systems are partially gravity-dependent, so by ‘taking away’ gravity researchers can gain broader insight into how they work.

“To give an idea, Kubik has over the years hosted samples of bacteria, fungi, human white blood cells and stem cells from bone marrow and umbilical cords, plant seedlings, and swimming tadpoles. A pending payload is designed to examine how microbial biofilms interact with rock surfaces across different gravity levels, from weightlessness to Mars and Earth gravity.”

Experiment times are limited because the samples are biological – part of the work is carefully planning the mission scenario. Even the hours needed for the ascent and descent of the experiment unit to and from Columbus are carefully accounted for, to ensure that they are back again within a couple of weeks of launch, depending on the sensitivity of the samples.

“We’ve been using the Soyuz, and now the SpaceX Dragon,” adds Jutta. “Typically, when one vehicle goes up another one comes down. This ensures that experiments can be up- and downloaded rapidly.

“A fixative is often added to an experiment at its conclusion, so researchers get to examine it as it was in microgravity. Additionally, units can be refrigerated during their return trip.”

Twelve experiments from ESA and national space agencies have so far been run in Kubik, with ESA planning seven more by the end of this decade. The facility is due to be upgraded with new electronics, to offer more features and keep it fully operational into its second decade.