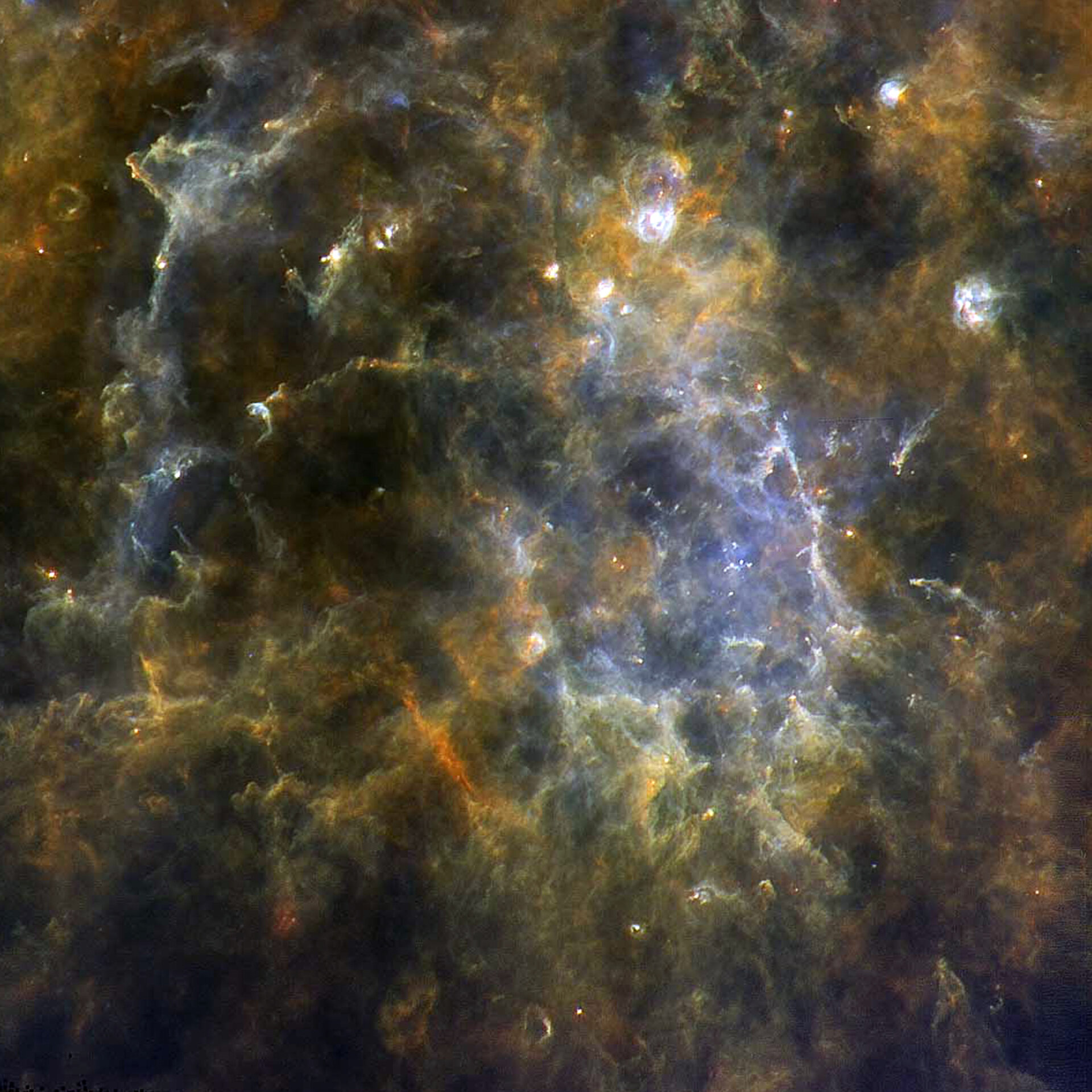 Chaotic web of filaments in a Milky Way stellar nursery

The plane of the Milky Way is rich in star-forming regions, such as the one pictured in this stunning scene by ESA’s Herschel space observatory. To the far-infrared eye of Herschel, this region reveals an intricate network of gas filaments and dark bubbles interspersed by bright hotspots where new stars come to life.

The cooler regions, which emit light at longer wavelengths, are displayed in a red-brownish colour. Hotter areas, where star formation is more intense, shine in blue and white tones. Some areas are particularly bright, suggesting a number of luminous, massive stars are forming there.

Particularly striking is the chaotic web of gas filaments we see in this scene. Astronomers think there is a link between star formation and the filamentary structures in the interstellar medium. In the densest strands, the gas that makes up the filaments becomes unstable and forms clumps of material bound together by gravity. If dense enough, these collapsed blobs of gas eventually go on to become newborn stars.

Observations by Herschel showed the filamentary complexity to be ubiquitous in the plane of our Galaxy, from a few to hundreds of light-years. In nearby star-forming clouds, within 1500 light-years of the Sun, these filaments seem to be roughly all the same width – about a third of a light-year. This suggests a common physical mechanism in their origin, possibly linked to the turbulent nature of interstellar gas clouds.

The star-formation region in this image, centred around –70º longitude in galactic coordinates, is located in the Carina neighbourhood, home to the glorious Carina Nebula. Located some 7500 light-years away, Carina is one of the largest clouds of gas and dust in the plane of the Milky Way. It hosts the famous Eta Carinae, one of the most luminous and massive stellar systems in our galaxy.

Herschel, which operated from 2009 until 2013, was a large space telescope observing in the far-infrared and submillimetre parts of the spectrum. This spectral range is ideal to observe the glow from cool dust in the regions where stars form. As part of Hi-GAL, the Herschel infrared Galactic Plane Survey, the observatory surveyed the plane of our Galaxy, exploring the Milky Way’s star-formation regions in unprecedented detail. This image, a product of Hi-GAL, combines observations at three different wavelengths: 70 microns (blue), 160 microns (green) and 250 microns (red).