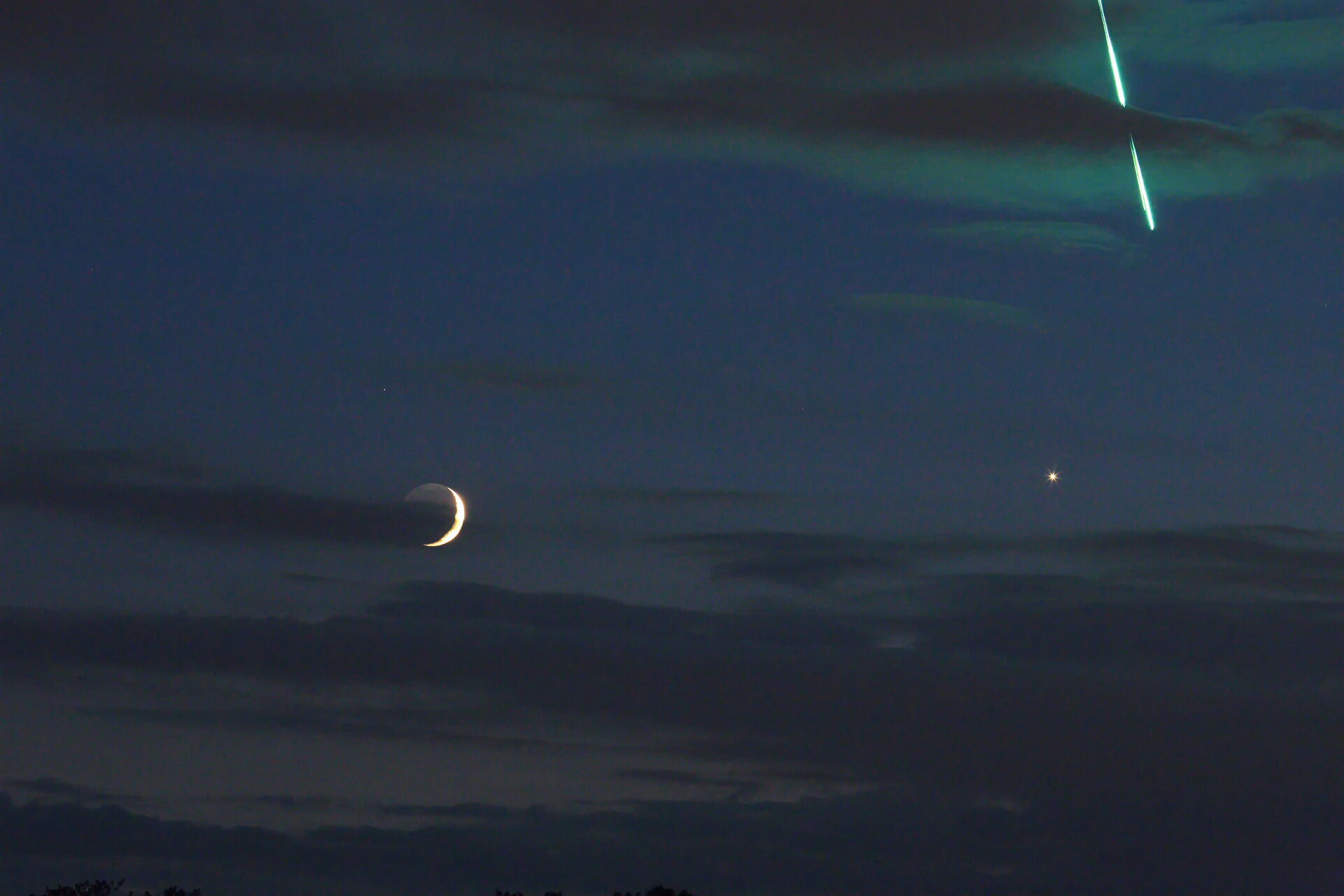 When Uwe Reichert grabbed his camera and tripod on the evening of 16 June 2018, he intended simply to image the conjunction of the then-three-day old Moon and the bright Venus.

In his backyard, near Heidelberg, Germany, trees and bushes blocked the view towards the western horizon, so he strolled through the neighbourhood searching for a better viewpoint. After taking a few pictures from various positions, he finally ended up on the outskirts of the town where he could see both celestial objects shining above some scattered clouds in the far distance.

He set the focal length of his 100-400mm telephoto lens to 180mm, chose a small aperture of f/10 so that bright Venus might produce some pictorial rays and switched the sensitivity to ISO 4000 to keep the exposure time short enough to avoid blurring due to Earth’s rotation. By cosmic chance, in the same instant that he pressed the button of the camera's remote control, Reichert saw something bright falling from the sky.

First, a white light flashed up above Venus, moved downward with high speed, changing colour into an intense greenish glare, and what once appeared as one object disintegrated to a spray of smaller sparkles keeping the original trajectory until dying out just over the horizon.

As a long-time observer, both amateur and professional, he had seen many different celestial phenomena, including countless meteors and some bright fireballs, but this one appeared odd: The sparkles looked more like an exploding firework than a dying shooting star. But both the speed of the object and the very narrow angle under which the sparkles fanned out were arguments against artificial fireworks or other pyrotechnics.

Within a few seconds, Reichert went through different emotional states ranging from astonishment and puzzlement to euphoria: Had he really seen a cosmic body burning up in Earth’s atmosphere? When he checked the display of his camera, he was even more surprised: The object had crossed the camera’s field of view leaving a bright streak on the image. The streak appeared to have pierced the clouds as an object would have done when falling from high altitude down to Earth. Clearly, this object had really been falling down, but taking perspective into account the whole trajectory must have been above the clouds. Therefore, the flight path must have been much farther away than it appeared.

As it turned out a few hours later, with the help of Reichert’s picture, the fireball’s ground track was identified to have been over Belgium, some 230 kilometres away from the photographer’s position. Hundreds of people had seen the fireball, and the many sightings were also reported from Belgium and Holland, where Reichert’s picture made it to several news websites the next day.

On 30 June 2018, join ESA and the European Southern Observatory (ESO) for the live Asteroid Day webcast, packed with expert interviews, news and updates and some of the most recent asteroid science results starting at 13:00 CEST.