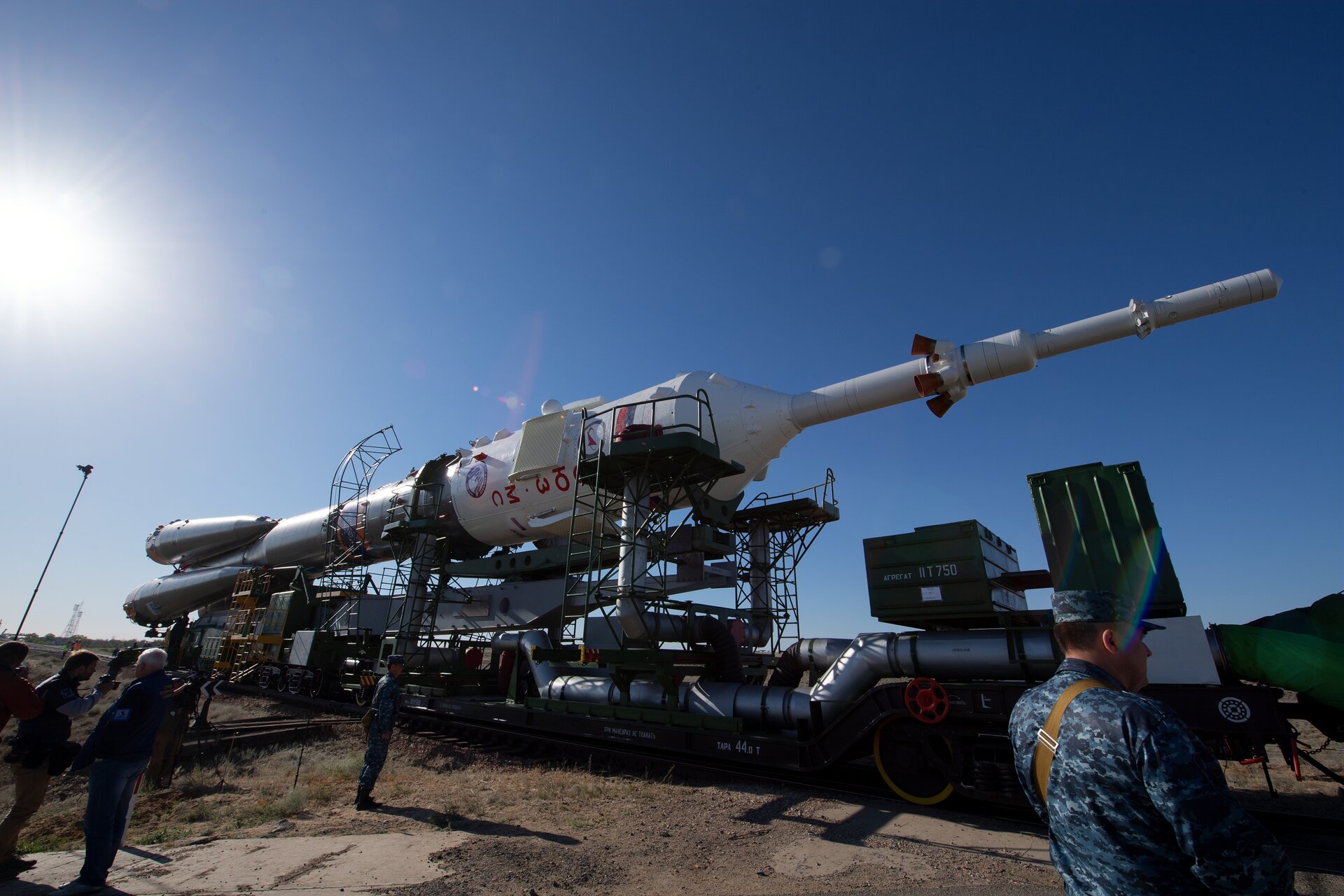 Here comes the ride, soon to be fuelled, but in the meantime waiting upright.

Yesterday the Soyuz MS-09 spacecraft, inside the Soyuz FG rocket, made its way to the launchpad ahead of tomorrow’s Horizons launch. ESA astronaut Alexander Gerst, NASA astronaut Serena Auñón-Chancellor and Roscosmos commander Sergei Prokopyev will hitch a powerful ride to the International Space Station at approximately 11:12 GMT (13:12 CEST).

The nearly 50-m tall rocket is transported by train from Baikonur cosmodrome to the launch pad, a ride that takes a few hours. The crew are traditionally forbidden to watch the roll out, as it is considered back luck.

Once at the launch pad, the Soyuz is lifted into launch position and will be fuelled roughly 5 hours before launch.

In use since the 1960s, the Soyuz are the most reliable launch vehicles to date and currently the only way for humans to reach the Space Station and return to Earth.

The Soyuz FG launcher is a three-stage rocket that delivers its passengers to low-Earth orbit within nine minutes after liftoff. The first stage consists of four identical booster rockets strapped to the second stage core (the parts of the rocket painted grey). The third upper stage gives the spacecraft the final boost to enter orbit. The spacecraft is at the very top, encased in the fairing that protects the spacecraft from aerodynamic forces during launch.

Once in orbit, the Soyuz spacecraft makes its way to the International Space Station in a six-hour trip or a two-day journey.

The Soyuz’s flight time is determined by the phasing angle, or the degree to which a spacecraft must adjust its position within an orbit. In order for the Soyuz to approach the Station, it needs to enter the same orbit using a series of manoeuvres and orbit corrections.

The phasing angle is too wide for this launch to make a faster rendezvous with the Space Station. Instead of circling Earth four times to catch up, the trio take the 34-orbit, two-day trip to their space home.

The crew will spend two days in a very cramped space but the longer journey saves the Space Station fuel that it would otherwise needs to change altitude to allow the Soyuz to catch up faster.

The Soyuz spacecraft is not the only vehicle to visit the Space Station. Cargo vessels regularly visit the orbital outpost, meaning the Station’s orbit must be kept within certain altitudes.

See our infographics for a visual breakdown of the Soyuz MS spacecraft, the Soyuz FG rocket, its liftoff sequence as well as rendezvous and docking procedures.

While the crew were not watching the rollout, they have been busy with final checks and traditions, including a medical check-up and a press conference scheduled for today.