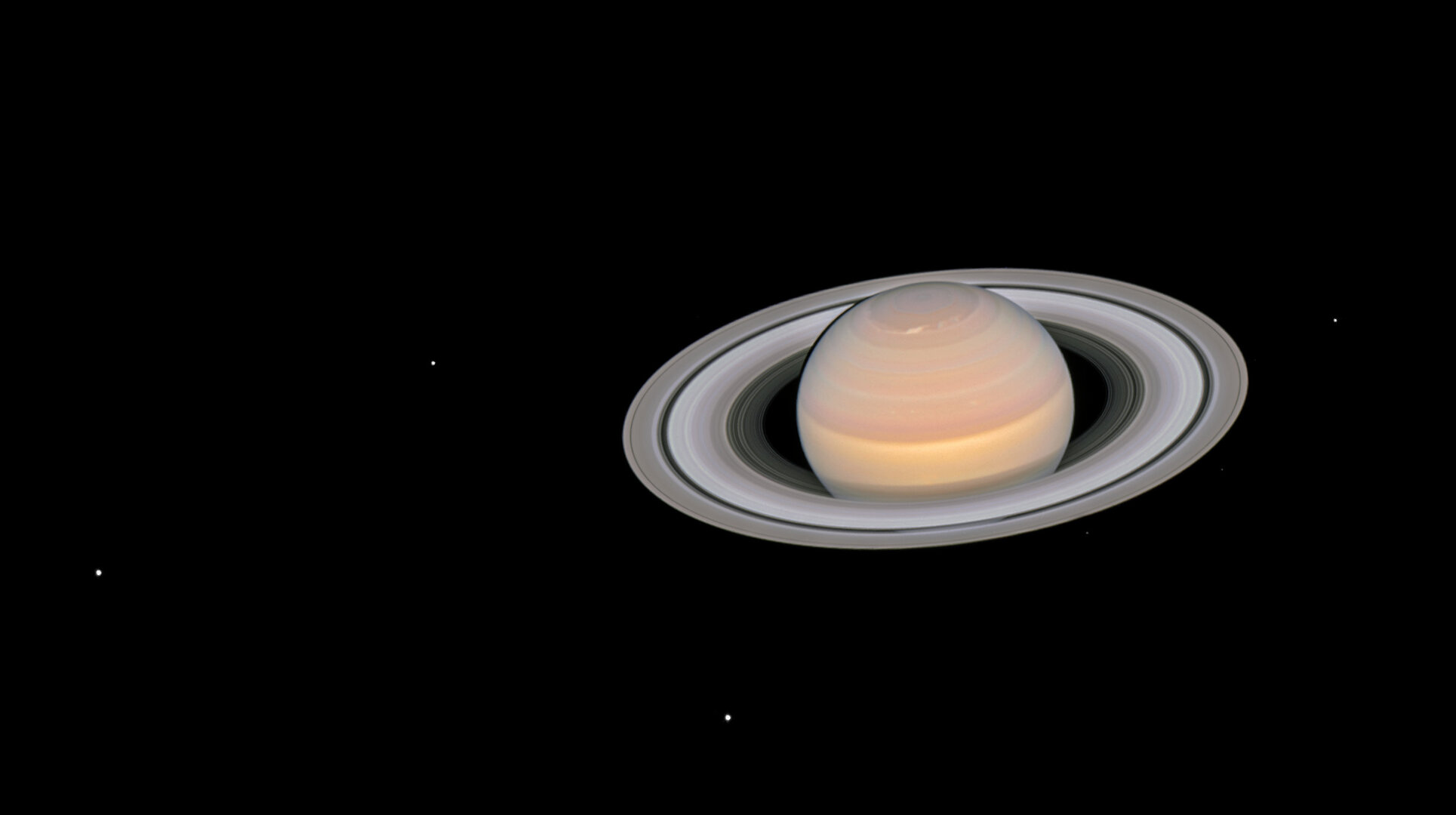 Saturn and its moons at opposition

Cassini ended its 13-year mission at Saturn on 15 September 2017 when it plunged into the gas giant's atmosphere, but the NASA/ESA Hubble Space Telescope is still keeping an eye on the ringed planet.

This is a composite image taken by Hubble on 6 June 2018 showing a fully-illuminated Saturn and its rings, along with six of its 62 known moons. The visible moons are (from left to right) Dione, Enceladus, Tethys, Janus, Epimetheus and Mimas (click here for an annotated version). Dione is the largest moon in the picture, with a diameter of 1123 km, compared to the smallest, oddly-shaped Epimetheus with a diameter around 116 km.

During Cassini’s mission, Enceladus was identified as one of the most intriguing moons, with the discovery of water vapour jets spewing from the surface implying the existence of a subsurface ocean. Icy moons with subsurface oceans could potentially offer the conditions to harbour life, and understanding their origins and properties are essential for furthering our knowledge of the Solar System. ESA's JUpiter ICy moons Explorer (Juice), due to launch in 2022, aims to continue this theme by studying Jupiter's ocean-bearing moons: Ganymede, Europa, and Callisto.

The Hubble image shown here was taken shortly before Saturn's opposition on 27 June, when the Sun, Earth and Saturn were aligned so that the Sun fully illuminated Saturn as seen from Earth. Saturn's closest approach to Earth occurs around the same time as opposition, which makes it appear brighter and larger and allows the planet to be imaged in greater detail.

In this image the planet’s rings are seen near their maximum tilt towards Earth. Towards the end of Cassini’s mission, the spacecraft made multiple dives through the gap between Saturn and its rings, gathering spectacular data in this previously unchartered territory.

The image also shows a hexagonal atmospheric feature around the north pole, with the remnants of a storm, seen as a string of bright clouds. The hexagon-shaped cloud phenomenon is a stable and persistent feature first seen by the Voyager 1 space probe when it flew past Saturn 1981. In a study published just last week, scientists using Cassini data collected between 2013 and 2017, as the planet approached northern summer, identified a hexagonal vortex above the cloud structure, showing there is still much to learn about the dynamics of Saturn’s atmosphere.

The Hubble observations making up this image were performed as part of the Outer Planet Atmospheres Legacy (OPAL) project, which uses Hubble to observe the outer planets to understand the dynamics and evolution of their complex atmospheres. This was the first time that Saturn was imaged as part of OPAL. This image was first published on 26 July.