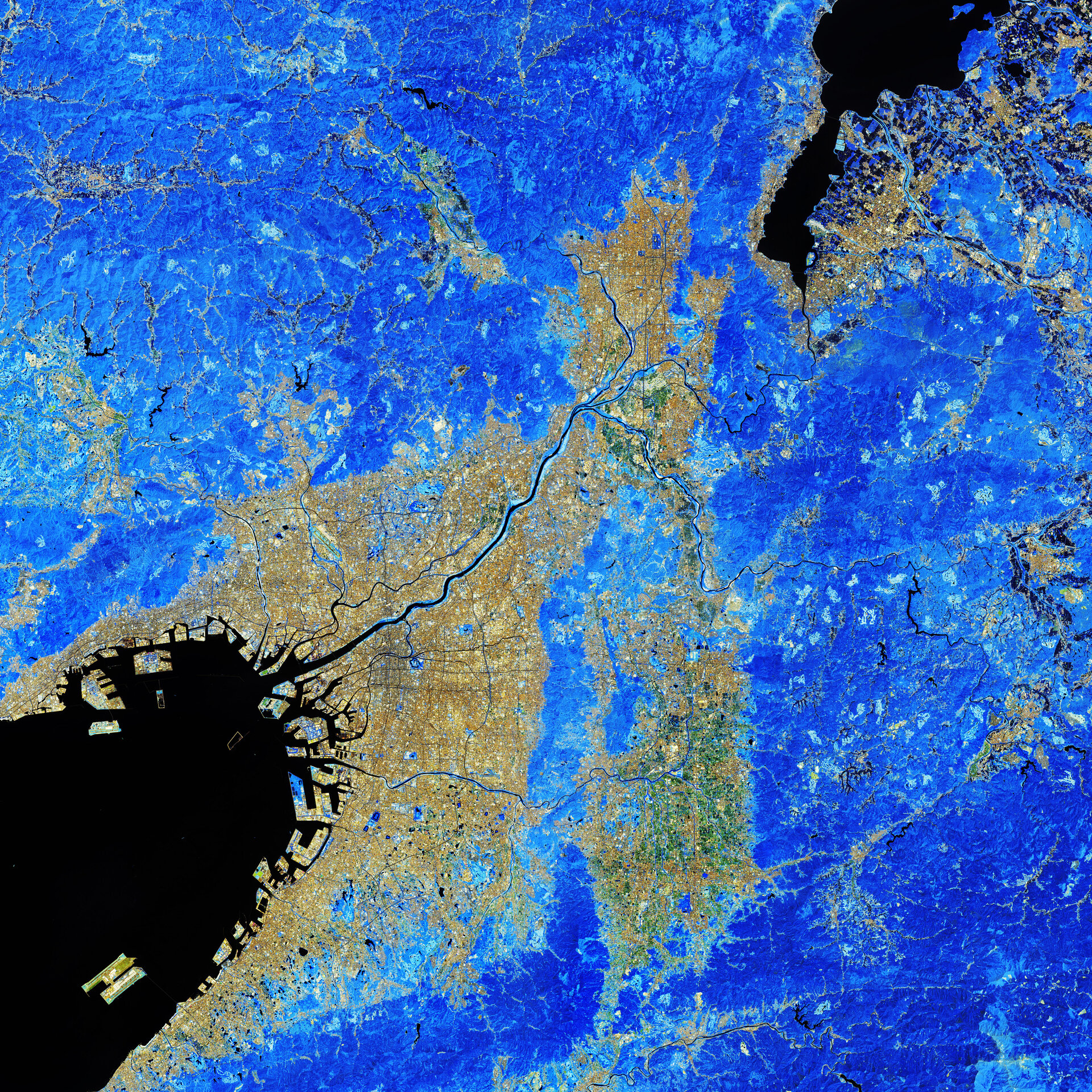 The Copernicus Sentinel-2B satellite takes us over Kyoto, shown in the top right, and Osaka, seen in the bottom left of this image. This striking false-colour image captures two of Japan’s larger cities, which are home to 1.5 and 2.7 million people, respectively. Both are, of course, significantly smaller than the capital. Greater Tokyo has a population of around 38 million, making it the largest megacity in the world.

The landscape of the Kyoto Prefecture varies from mountains and bamboo groves to waterfalls and forests. Vegetation is shown in vibrant shades of blue here, with built-up areas represented in yellow-red tones. Longer wavelength bands have been used when processing the image to make it easier to differentiate land cover, penetrate haze, and identify bodies of water.

Whilst almost three-quarters of the country is mountainous, less than 10% is covered by bodies of water. Northeast of Kyoto, we can see Lake Biwa, located in the neighbouring Shiga Prefecture. This is the largest freshwater lake in Japan, covering an area of 672 sq km.

The area is famous for being home to Narezushi, the precursor to modern-day sushi. The dish is thought to have originated in southeast Asia around the second century CE. People began to prepare it in Japan between 8 and 10 CE. Funazushi, using nigorobuna fish, typical of the Lake area, is prepared by fermenting and preserving the fish with rice and salt in barrels for up to a year. The result is a strong-tasting dish, often compared to blue cheese and accompanied by sake.

Visitors from all over the world travel to Kyoto, which is widely regarded as the cultural capital of the country. They are drawn by sites such as the Fushimi Inari Shrine, a UNESCO world heritage site, where more than 10 000 Torii gates stand in dedication to the Shinto god of rice.

The multicultural food scene of Osaka, meanwhile, attracts foodies, on the lookout for tasty street food and an insight into “kappo dining.” Meaning ‘to cut and to cook’, this less formal cuisine focuses on bringing the diner and the chef together, with diners often given the chance to chat with the person who is preparing their meal.

Over 100 Member governments and 120 participating organizations will gather in Kyoto from 29 October – 2 November for the Group on Earth Observations (GEO) Week 2018. The week’s events will focus on the use of Earth observation for the benefit of humankind through GEO’s three priority areas: the Sendai Framework for Disaster Risk Reduction, the Paris Climate Agreement, and the UN Sustainable Development Goals.

This image, which was captured on 11 May 2018, is also featured on the Earth from Space video programme.